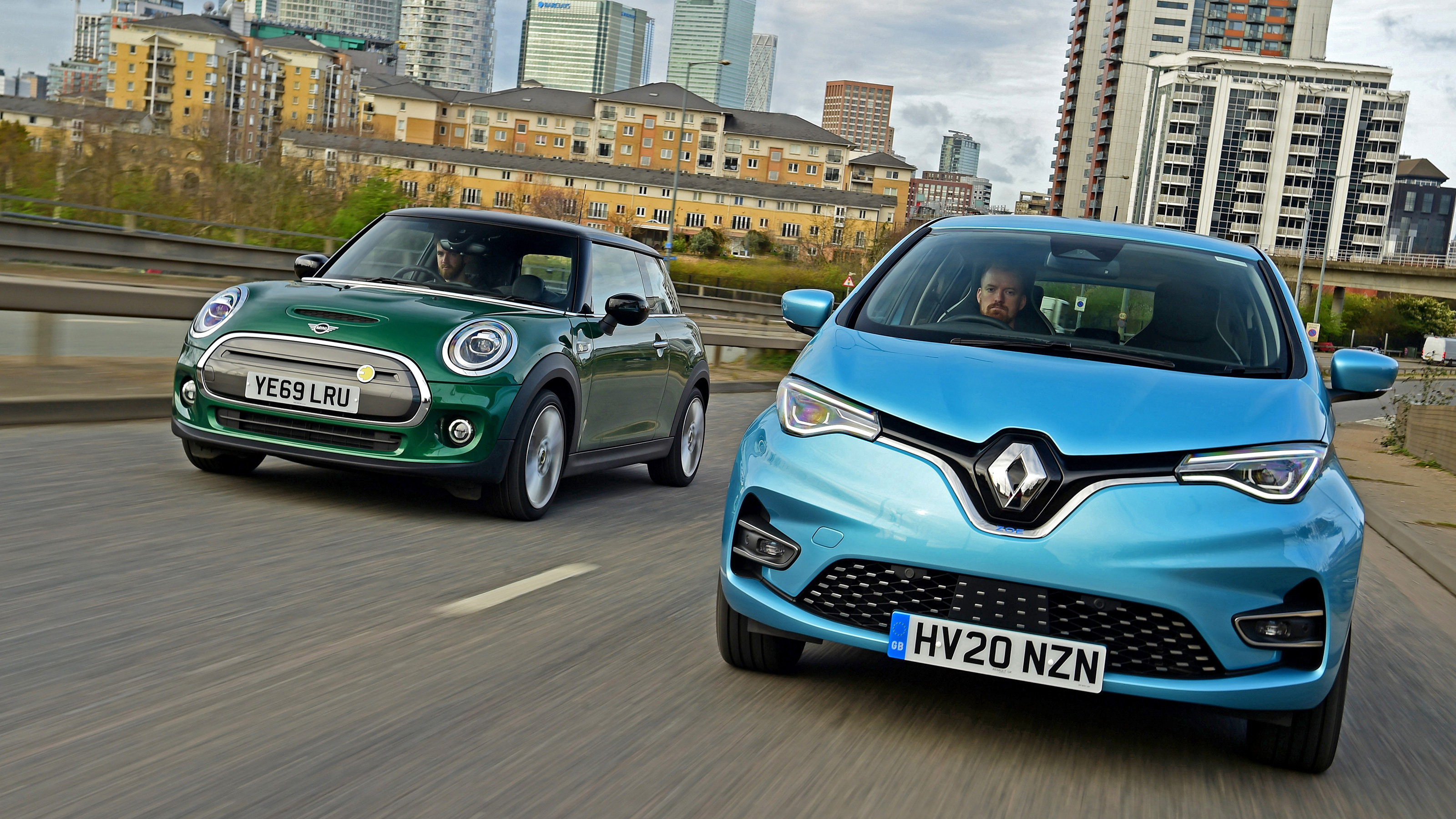 Fresh second-generation Renault Zoe takes on all-new MINI Electric in a showdown of the EV superminis.

This was all set to be the year of the electric car, before recent global events threw a big spanner in the works of the automotive sector, not to mention every other area of society.

The situation means the launch of many new small electric models will be put on hold, but two new models on their way to Australia hit the market before lockdown in overseas markets – and we put them together in a head-to-head test.

They’re the new Renault Zoe and MINI Electric, two EV superminis that are going after the same customer, who is looking for eco-friendly urban transport with low running costs. This is the Mk2 Zoe, so Renault has experience when it comes to electric cars. But apart from a few experimental MINI Es in 2010, this is MINI’s first adventure into all-electric production, so we’ll see which model is the best compact EV.

This second-generation Zoe takes Renault’s experience with its past EVs and packages it in a fresher and more practical car that is packed with extra technology.

The new Zoe uses an adapted version of the original car’s platform, so there are MacPherson struts at the front and a torsion beam at the rear; nothing new there. Instead, the big advances have come in its powertrain.

The battery is still sandwiched in the model’s floor and under the rear seats, but there’s more energy density now, so it packs 52kWh of usable capacity.

While there’s only one choice of battery, there are two choices of electric motor. The first – the R110 – offers 80kW, but it’s the R135 that we’re testing here, which packs a 99kW and 245Nm punch. This is still down on the MINI’s claimed outputs, but because the Zoe’s battery is bigger than its competitor’s, it means there’s much more range on offer, at a claimed 383km, according to Renault.

Range is key to any EV, and charging goes hand in hand with this. But it’s a mixed bag here for the Zoe; the Renault has some real positives, such as its Chameleon Charger that allows the car to always charge at the maximum power available, saving time and money. However, CCS DC rapid charging isn’t standard, unlike on the MINI, so you’ll have to fork out extra for this option even on the top-spec i GT Line trim. It is necessary in this day and age given the increasing rate rapid chargers are popping up; it also makes the car more versatile.

It’s the only real option you should need, because GT Line gets lots of standard kit, including a 9.3-inch touchscreen with nav, Apple CarPlay and Android Auto, wireless smartphone charging, climate and cruise control, a 10-inch digital dash, parking sensors, a rear camera and even part-recycled upholstery.

The interior is fine, if a bit blander than the MINI’s, but it’s the driving position that’s worse; you sit high up, which does at least mean visibility is good, but you can’t adjust the seat height.

Soft suspension means the Zoe is compliant and relatively comfortable, which makes it great around town, soaking up the scars on urban roads. That softness means it feels less tied down on sweeping roads out of town, and the higher seating position exacerbates the top-heavy feel, because there is quite a bit of roll. But this isn’t designed to be a sporty small car; it’s an all-electric supermini that focuses on comfort and around-town performance, so in that respect the Renault fulfils its brief nicely.

The steering is light, so it’s easy to manoeuvre, and the power delivery is smooth. Instant torque means it’s best off the line to 50km/h, where the Zoe recorded a time of 3.2 seconds in our tests, 0.3 seconds behind the MINI. Yet the acceleration tails off beyond about 70km/h, and the cars’ 0-100km/h times showed this; the Zoe took 9.2 seconds, the MINI 6.7 seconds.

You’d never call the Zoe slow, though. Compared with a 1.0-litre supermini, its performance is better and more easily accessible, thanks in part to the single-speed automatic transmission. It’s more than adequate, and the electric powertrain is also superbly quiet. The refinement matches this because there’s not much suspension or road noise, and wind noise is kept at bay, too. It’s an impressive package. The Renault puts clear ground between itself and the MINI for usability. The Zoe is a five-door and the MINI is only available as a three-door, so access to the rear seats is much easier. There’s more room, too, while the Renault’s taller roofline means headroom is good, and because you sit higher up on top of the battery, this brings your legs back towards you and creates more legroom.

The 338-litre boot is also larger and close to some superminis’. In fact, the packaging is good, with the electric-car architecture making the most of storage. With EVs, practicality is as much about charging. Forget the three-pin plug; that’s only for emergencies. Otherwise, the car’s Chameleon Charger helps here. With a 7.4kW wallbox supply, a full charge takes nine hours and 25 minutes, so overnight charges should be fine. With a 22kW A/C supply, this drops to three hours. Spec the DC rapid-charge option, and an 80 per cent top-up with a 50kW supply takes 70 minutes.

There’s a lot of safety kit, too, with autonomous braking, blind-spot and lane-departure warning, lane-keep assist and traffic-sign recognition. Euro NCAP, which passes its results on to ANCAP, hasn’t yet tested this second-generation car.

Like the Zoe, MINI’s new Electric model is targeting buyers who are looking for a compact electric car that’s still relatively affordable. This Level 2 model costs $52,000 in Europe, so it’s cheaper than its rival from Renault – but that’s not the full story.

While the MINI Electric in Level 2 trim undercuts the top-spec Zoe, if you stepped up to the range-topping Level 3 MINI the tables are turned in the Zoe’s favour, albeit it to a slightly lesser degree. There’s a similar level of kit, too. Level 2 has parking sensors and a reversing camera, climate and cruise control, keyless operation and LED lights. There’s the latest smartphone connectivity and a digital dash, so the equipment specs aren’t too different.

However, Level 3 trim only really adds front parking sensors, an upgraded stereo, a panoramic sunroof, leather trim and a larger infotainment screen, so Level 2 is definitely the best bet.

Where there is a big difference between the two test cars is in their mechanical and electronic specs. All MINI Electrics get the same lithium-ion battery, with 28.9kWh of usable energy, which is significantly less than the Zoe. This energy feeds an electric motor on the front axle that delivers 135kW and 270Nm of torque, which is quite a bit more than the Renault.

The electric variant is adapted from the MINI architecture, so the suspension layout is the same as the Cooper’s, for example, which means struts at the front and a multi-link axle at the rear, unlike the Zoe. This has many positives for the driving experience. There’s a 50kW DC rapid-charging capability as standard here, so you don’t have to fork out extra for quicker recharges, but the downside is that given the MINI’s smaller battery, you might need to make more frequent use of this than in the Zoe.

The interior is familiar and quality feels good, as in all MINIs. It’s not necessarily better than the Zoe, just different. The Renault feels more like a bespoke cabin design for an EV; the MINI is like a MINI, just with a few extra touches, such as the digital display behind the steering wheel. At least that means the model’s ergonomics and driving position are as good as ever.

Those similarities extend to the driving experience, because the MINI Electric handles with the same broad sense of keenness and agility as a standard Cooper; it’s just that the extra weight of the battery (even if it is kept low in the car) dulls that by a noticeable amount. But the MINI is much more alert than the Zoe. Its steering is quicker, weightier and more precise, and there’s more grip, too. It means the MINI feels much more fun to drive. That’s helped by the performance, because there’s much more on offer here, as our test figures show. The MINI sprinted from 0-50km/h in 2.9 seconds, but it really asserted its advantage over the Renault from 0-100km/h, where it clocked 6.7 seconds, which was 2.5 seconds faster than the Zoe.

One area where the MINI’s extra weight over the standard car is a positive is the ride. That mass helps to just take the jiggly, firm edge off the ride that you find in a normal Cooper. It’s still not as soft or quite as comfortable as the Zoe, but the damping does feel nicely set up and the MINI controls its weight well over bumps. Refinement is good too, so there’s very little to split these two cars when it comes to noise around town or on the motorway.

The real difference between them is range. According to our efficiency figures, the MINI will only cover a real-world 167km on a full battery, whereas the Renault should travel 308km on a charge. That means the MINI can only manage 54 per cent of the Zoe’s overall range, which has a big bearing on usability. At least charging the MINI up will be okay, because an 80 per cent charge using a 50kW rapid charger will take 35 minutes. This drops to three and a half hours using an 11kW AC feed, and four hours 12 minutes for a 7.4kW supply from a home wallbox. With a smaller battery, it stands to reason the MINI will take less time to charge up.

Yet the boot is also smaller, at 211 litres. This is 127 litres less than the Zoe’s capacity, while the MINI Electric is only available as a three-door, so access to the rear seats isn’t as easy as it is with the Renault. It’s also much tighter when you’re sat in the back.