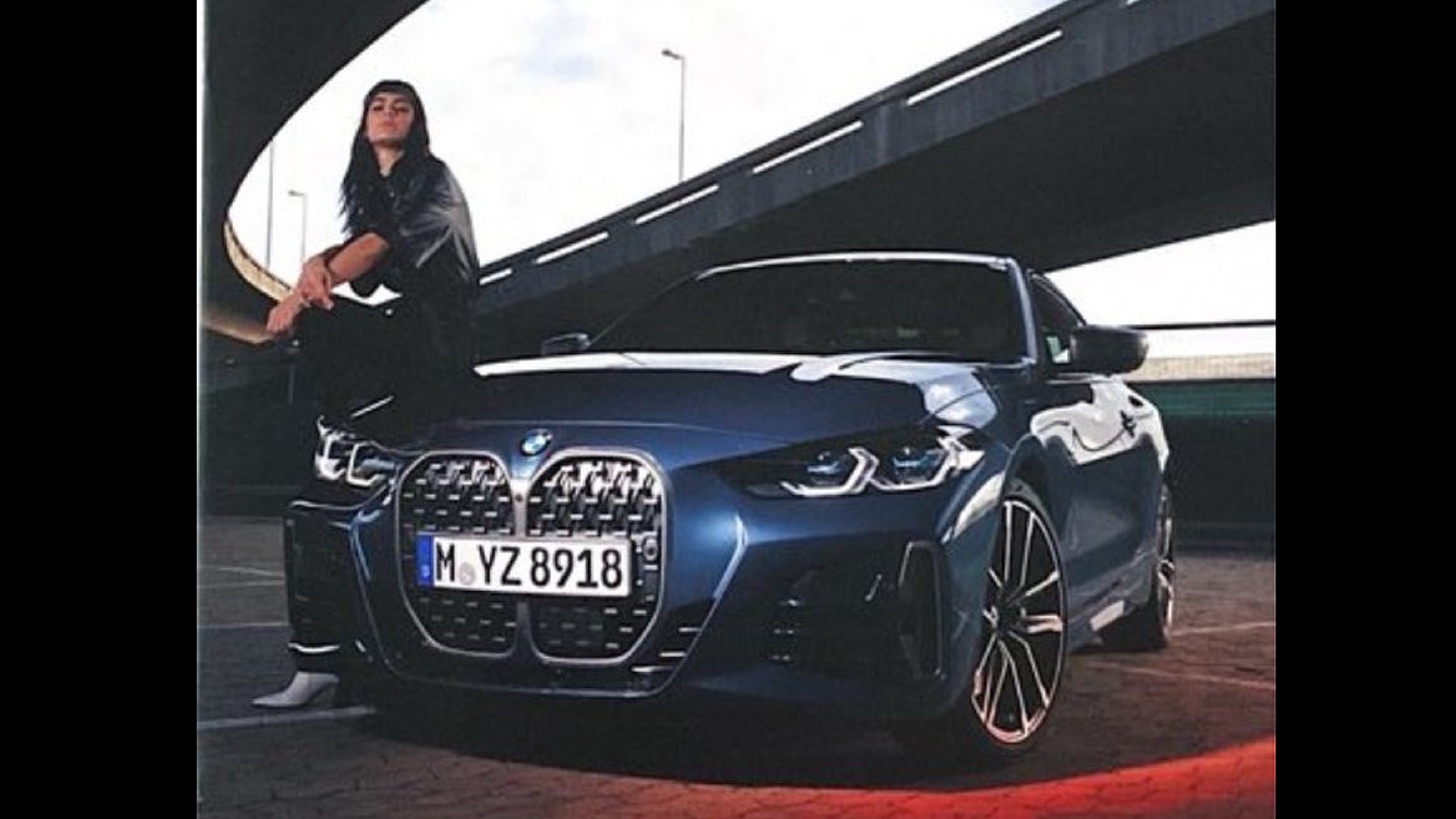 BMW has confirmed that the next 4 Series Coupe will be officially revealed on 2 June but the new car has slipped out early, pictured in what appears to be an official image leaked online. The radical design overhaul that has been on the cards for the new 4 Series is confirmed along with the oversize front grille that’s been attracting so much interest in the run-up to the launch.

As expected, the nose of the new BMW 4 Series is dominated by a pair of large, vertically oriented kidney grilles, quite unlike those on the current 3 Series saloon it shares its platform with. As such, BMW will employ a new strategy with its new coupe. Until now, it’s been intrinsically linked to the 3 Series, but the brand will clearly market the newcomer as much more than a sibling to the saloon, with an entirely separate design. No other information has been published so far.

The new 4 Series is being pushed through the final stages of its development cycle, with the latest spy shots showing a lightly camouflaged test mule undergoing handling assessment at the Nurburgring. It will go on sale later this year, with four and six-cylinder power anticipated. A convertible will follow, as will a hot M4 version.

We’ve already driven a prototype version of the 4 Series Coupe– in both middling 430i and hot M440i trims – and the early signs show a huge amount of promise. Here’s everything we know about the car so far. Before the leak, BMW had released some official images of the new 4 Series Coupe – and while the car in those pictures wears heavy camouflage, our spy photographers had also spotted a range of scantily clad test mules elsewhere – giving us a good indication of the styling. The big talking point is the car’s new front end.

BMW says that the polarising look is a fresh interpretation of the vertical grille seen on the brand’s famed 328 sports car and the E9 coupe of the late sixties and early seventies. The controversial appearance is also intended to further distance the 4 Series Coupe from the 3 Series saloon on which it’s based.

Elsewhere, the 4 Series Coupe’s styling is almost identical to the BMW Concept 4 from the 2019 Frankfurt Motor Show. A pair of slim LED headlamps, flared haunches, and a squared-off tail all feature.

Like its predecessors, the 4 Series is based on the 3 Series saloon, albeit with several mechanical and structural tweaks which should make it a sharper car to drive. The roofline of the coupe body is 57mm lower than the four door, which not only improves aerodynamic efficiency slightly, but also lowers the car’s centre of gravity by 21mm.

Further attention has been given to the suspension setup. The coupe’s rear track has grown 23mm from the saloon, while revised dampers and a strengthened front bulkhead promise more precise steering response.

The 4 Series line-up will show an increased focus on performance. We expect a hot M440i xDrive variant to arrive early marked out by a more aggressive body-kit and will be powered by a 275kW turbocharged 3.0-litre straight-six engine, which will send its power to all four wheels via an eight-speed automatic gearbox.

BMW has also confirmed that the M440i xDrive model will feature a 48-volt mild hybrid setup. The electric motor adds an extra 8kW, and is claimed to improve throttle response and deliver smoother getaways from standstill. The motor is powered by a small additional battery that is charged up from energy that would otherwise be wasted during deceleration.

Four-cylinder petrol versions and diesel versions of the new 4 Series will also join the fold in time.

BMW will also engineer a flagship M4. This isn’t due until 2021, but it too will be powered by a 3.0-litre straight-six engine – one developed specifically by BMW’s M Division. Shared with the current X3 M, this twin-turbocharged unit makes up to 375Kw and 600Nm. Plus, for the first time in an M4, a selectable four-wheel-drive system will be used. BMW is yet to officially announce prices for the next-generation 4 Series Coupe, but buyers should expect to pay a small premium over the equivalent 3 Series saloon.