Audi has unveiled its hot new S3 in hatchback and sedan forms.

The performance model, which will top the fourth-generation A3 range until the hardcore RS3 arrives next year, takes its power from the same 2.0-litre turbocharged four-cylinder engine as its Volkswagen Golf GTI sibling.

Mechanical tweaks for the new car include Audi’s new valve lift function, which adjust the lift of the intake valves to ensure the combustion chambers are optimally filled, while a thermal management system enhances efficiency.

Drive is sent to all four wheels as standard through a seven-speed dual-clutch automatic gearbox, with a hydraulic multi-plate clutch varying torque between the front and rear axles for maximum traction and stability in corners.

The new S3 sits 15mm lower than its predecessor, and an optional sports suspension package brings a damper control function that is said to adapt the suspension to suit the driving situation “in a few thousandths of a second”. 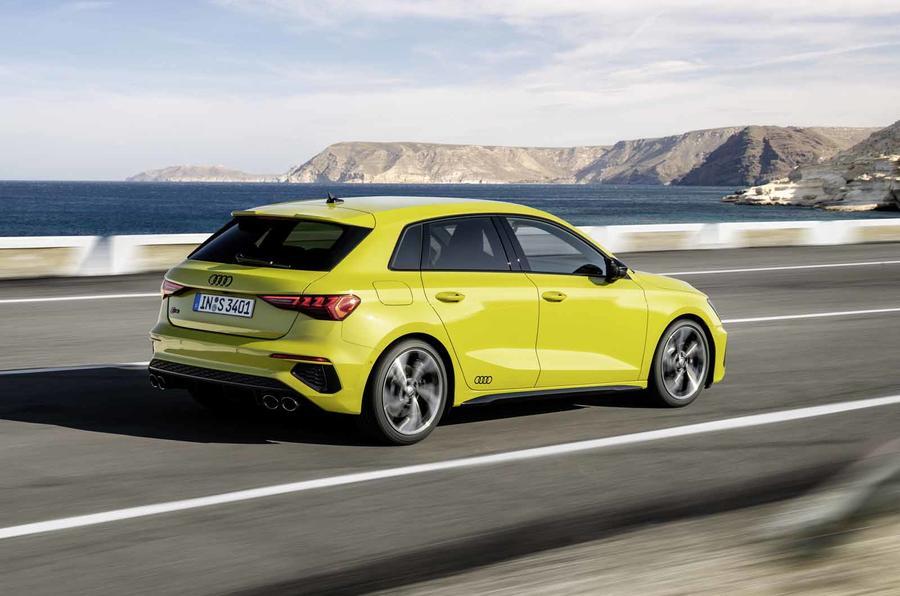 As with the standard A3, the performance model’s styling has been subtly evolved rather than radically overhauled. Redesigned headlights – optionally with matrix LED functionality – sit above a new grille and front splitter with larger air intakes, while the side has been reprofiled with an emphasis on the rear wheel arches. At the rear, both variants are set apart from the standard A3 with a prominent diffuser and quad-exit sports exhaust. Inside, the performance duo feature the same overhauled interior as the A3, but with a number of features aimed at making it more “focused on the driver”. Alongside the addition of new sports seats and a smaller gear selector, the S3 features a number of carbonfibre or aluminium trim elements and reshaped air vents that form a single unit with the digital display housing.

As standard, the S3 comes equipped with a 10.3-inch digital instrument panel, but upgrading to the Audi Virtual Cockpit increases that to 12.3-inch, while a ‘plus’ package splits the display into three separate screens. The new-generation infotainment system is said to be 10 times more powerful than its predecessor, with the 10.1-inch touchscreen capable of providing acoustic feedback and recognising handwritten letters.

Customer deliveries are set to get under way in Europe from October with Australian launch timing has yet to be officially announced.