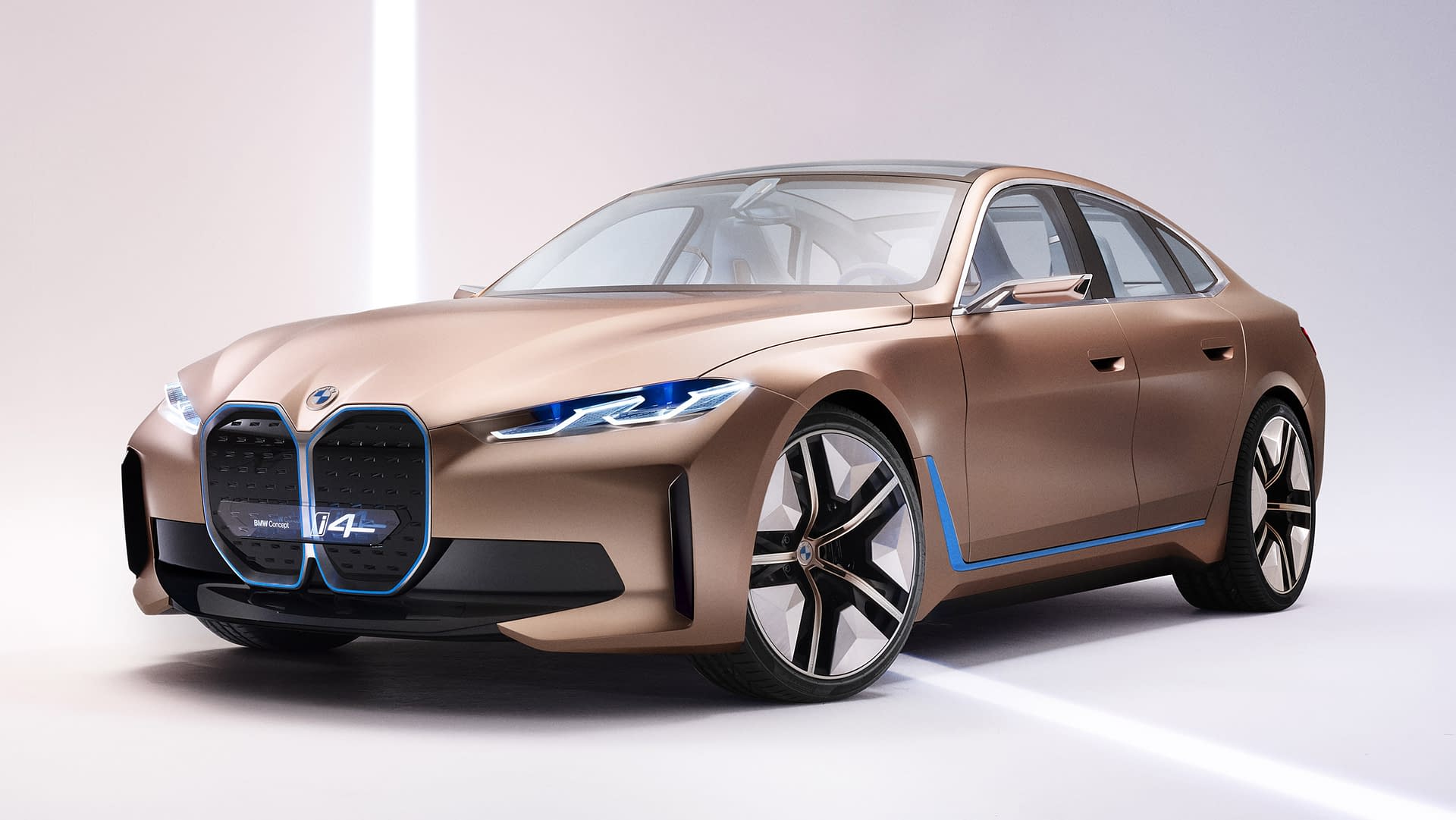 The upcoming BMW i4 has been previewed by a concept car. When it reaches production, the pure-electric sedan which will go head-to-head with the Tesla Model 3. Here’s everything you need to know.

Look past some of the more overtly concept car-like design details – the intricate headlights and the dainty door mirrors, for example – and we’re looking at the production-ready i4. It’s a car which itself will share much with the upcoming BMW 4 Series Gran Coupe.

However, the electric variant will be set apart from the combustion powered version courtesy of a smooth front grille, blanked-off ducting, blue styling elements, and alloy wheels whose design takes into account both an EVs greater need for aerodynamic efficiency and a reduced demand for brake cooling.

Around the side, the i4 will also conceal the battery pack, while the reworked rear diffuser masks the space that would normally be occupied by an exhaust system.

Inside, the i4 Concept shows off a curved infotainment screen/digital gauge cluster combo. BMW has confirmed this will make production in not just the i4, but also the upcoming production-ready iNEXT SUV. The screen controls almost all of the vehicle’s functions, including heating and ventilation, infotainment and navigation.

The cabin is trimmed in a host of sustainable materials, including microfibre fabric and natural leather, which is tanned using an olive leaf pigment. As on the conventional 4 Series Gran Coupe, the centre console also features BMW’s trademark iDrive rotary control dial, albeit re-trimmed in crystal glass.

The BMW Concept i4 features a 390kW electric motor, which provides a claimed 0–100km/h time of four seconds and a top speed of 200km/h. The powertrain is fed by an 80kWh battery pack, which provides a maximum claimed range of 600kms.

Drivers have their choice of three display modes for the infotainment system – “Core,” “Efficient” and “Sport” – each of which is indicated by a unique interior ambient lighting set-up. The first is an updated version of the familiar four-widget display system found on current BMW products. “Sport” mode illuminates the cabin in red, moves the gauge cluster’s widgets closer together and adds a display that shows how tight the next corner is.

BMW i4: prices and release date

Prices for the new model are still to be confirmed, but when it goes on sale in late 2021, it’ll need to be on a par with the Tesla Model 3, which starts in Australia from $67,900, but rises to just under $100K. We suspect that the i4 will be priced closer to the top of this range.