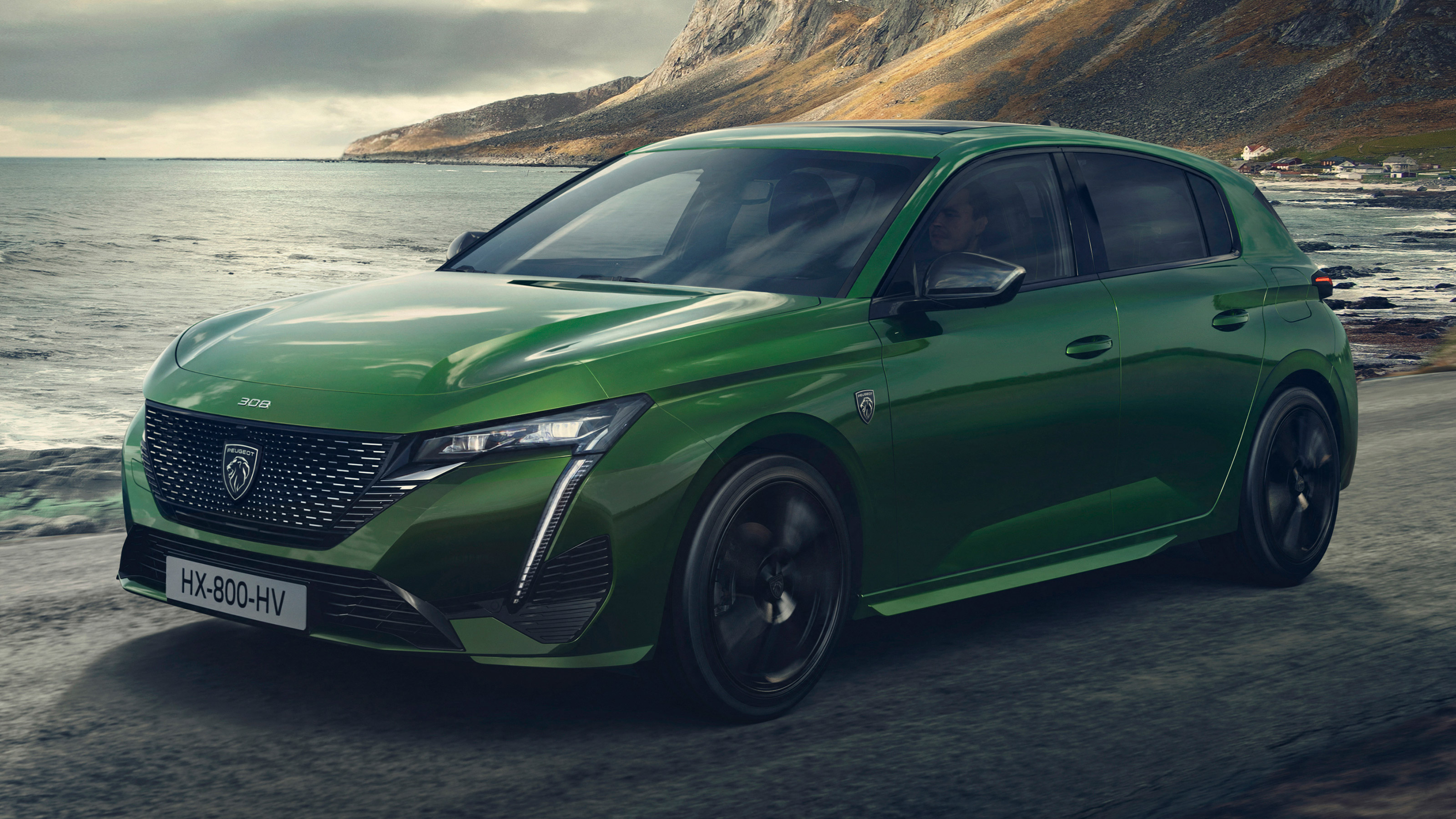 Peugeot has pulled the covers off its latest family hatchback, the third-generation 308, with the new hatch the first car to feature the brand’s new logo as part of its recent rebrand.

The big news is that the new Peugeot 308 will be available with electrified powertrains for the first time, including two plug-in hybrid models from launch.

It uses the same platform as its predecessor, but the latest version of the EMP2 architecture – developed by the PSA area of the new Stellantis group – has seen heavy development since its introduction in 2013, when the second-generation 308 was the first Peugeot model to use it. The introduction of electrification isn’t the only big change for this new model. The new 308 is the first Peugeot to wear the brand’s new black and white badge, with Peugeot repositioning itself as one of the more aspirational brands in the new Stellantis group. As a result the car gets a massive interior overhaul to support this, while there have also been steps forward when it comes to infotainment and driver assistance technology. From a design perspective it could be argued that the look of the 308 isn’t all too surprising, but still striking. Peugeot has recently introduced an evolution of its latest design language on the facelifted 3008 SUV, and though the 308 is smaller and sportier, it’s still in keeping with its higher riding and more practical sibling.

The bonnet swoops downwards to create a lower looking nose than before, while beneath it sits a new, larger grille wearing that updated badge. Slimmer headlights are integrated into the edges of the grille, alongside Peugeot’s fang-like LED daytime running lights. A strong shoulder line runs from the top of the headlight to the tailight, and there are two prominent new creases above the front and rear wheels.

At the back, there’s a prominent rear spoiler on the boot door, while the tailgate is headlined by another typical modern Peugeot design feature – tail lights with three ‘claw’ style lighting elements. It’s 11mm longer than the old car, at 4,360mm, and 20mm lower. But more importantly, the wheelbase has grown by 55mm, so despite the more rakish looking rear end, space in the back has improved.

Boot space stands at 412 litres, so the new 308 should prove one of the more practical options in the family hatchback category when it goes on sale. It means the boot is larger than the Volkswagen Golf, Hyundai i30, Ford Focus or Mercedes A-Class.

A more practical estate version is coming too, with the ‘SW’ badged 308 model to be revealed in the coming months. Inside, the 308 has undergone a heavy transformation. The dashboard integrates some of Peugeot’s newest infotainment and display technology into a completely new design, to place some distance between the 308 and the 3008 SUV.

The tall, sloping dashboard features air vents placed high up, while a sharp-looking 10-inch touchscreen display on the dashboard controls most of the in-car tech, and now features wireless Android Auto and Apple CarPlay compatibility. There are two versions of this screen – the basic i-Connect version and the i-Connect plus, which features widescreen navigation from TomTom. The new graphical interface is customisable and uses a widget-based organisation system, like a smartphone or tablet.

Beneath it is a row of freely configurable touch-sensitive controls, called ‘i-Toggles’. Each one is a shortcut to a major function, such as climate control, the telephone or radio. A row of ‘piano key’ style buttons sits at the base of the infotainment zone. The 308 continues to use Peugeot’s i-Cockpit steering wheel and instrument layout. That means that the small steering wheel sits below the new digital instrument panel, which is now available with the clever 3D image tech used on the brand’s smaller 208.

The large centre console gets a new look too. It comes with 34 litres of storage space, including a large cubby, which is home to a wireless smartphone charger. Luxury touches include the availability of nappa leather upholstery and massaging seats. There’s also a new cabin air filtration system designed to keep polluting gasses and particles out, with the cabin air quality level displayed on the infotainment screen.

Peugeot will offer the 308 with two pure petrol options, one diesel, and two petrol plug-in hybrids.

The petrol engine line-up kicks off with the PureTech 110 – a 1.2-litre three-cylinder turbocharged engine developing 80kW, sending drive to the front wheels via a six-speed manual gearbox. More power is offered with the PureTech 130, with 95kW from the same basic 1.2-litre engine. This can be chosen with a six-speed manual as standard, or with an eight-speed automatic transmission.

The sole diesel is Peugeot’s BlueHDi 130, a turbocharged 1.5-litre four-cylinder engine developing 95kW, which is available with a six-speed manual gearbox. Peugeot has not revealed any performance, fuel economy or CO2 figures for any of the combustion units just yet. The two-strong plug-in hybrid line-up opens with the Hybrid 180 model. This combines a 110kW PureTech petrol engine with a 81kW electric motor and a 12.4kWh battery. That’s a smaller battery to the 3008 plug-in hybrid, but Peugeot claims that 60 kilometres of pure electric running is possible in the 308, alongside CO2 emissions as low as 25g/km, which should make it a compelling company car choice.

More power is available with the Hybrid 225 drivetrain, which combines a 133kW petrol engine with the same 81kW electric motor for a maximum combined power output of 165kW. Again, up to 60 kilometres of battery running is claimed, while CO2 is up marginally to 26g/km.

From a household plug, both batteries will be replenished in just over seven hours; 3.7kW single-phase charging is supported as standard, which means recharges will take three hours and 50 minutes. A 7.4kW on-board charger will be available as an option, and plugged into a wallbox the battery will take one hour and 50 minutes to be topped up.

The plug-in hybrid versions of the 308 feature a thermal pre-conditioning function too. Via the MyPeugeot smartphone app or the car’s touchscreen, users can schedule a wake-up point for the battery. This means that the cells can be at the optimal temperature for efficiency from start-up, while the cabin can be pre-heated or cooled as well. Peugeot Drive Assist 2.0 is making its debut on the new 308 – the latest development of the firm’s semi-autonomous driver assistance technology.

Whereas before, Drive Assist relied on stop-and-go cruise control and lane-keep assist, the new version can now automatically adapt the speed of the car around curves, operating at speeds up to 180km/h.

Elsewhere, the new 308 gains a long-range blind-spot-monitoring function, rear cross traffic alert and a reversing camera with a 180-degree field of view. A 360-degree top-down style camera is also available.

Adaptive cruise with a full stop-and-go function is only available on automatic versions of the new 308, although manual versions are capable of modulating distance from the car ahead, but not below speeds of 30km/h. Automatic high-beam and traffic sign recognition are offered, while every version gets an electronic parking brake.

Peugeot has confirmed that the new 308 will go on sale in Europe in the second half of 2021. Australia is expected to follow in 2022.

A trim structure has not yet been announced either, but is likely to follow that established by the 3008, with Active Premium, Allure, Allure Premium and sporty GT and GT Premium versions topping out the range.

Reflecting the new level of technology and Peugeot’s latest rebrand, expect the starting price of the 308 to nudge upwards, to around $32,000.