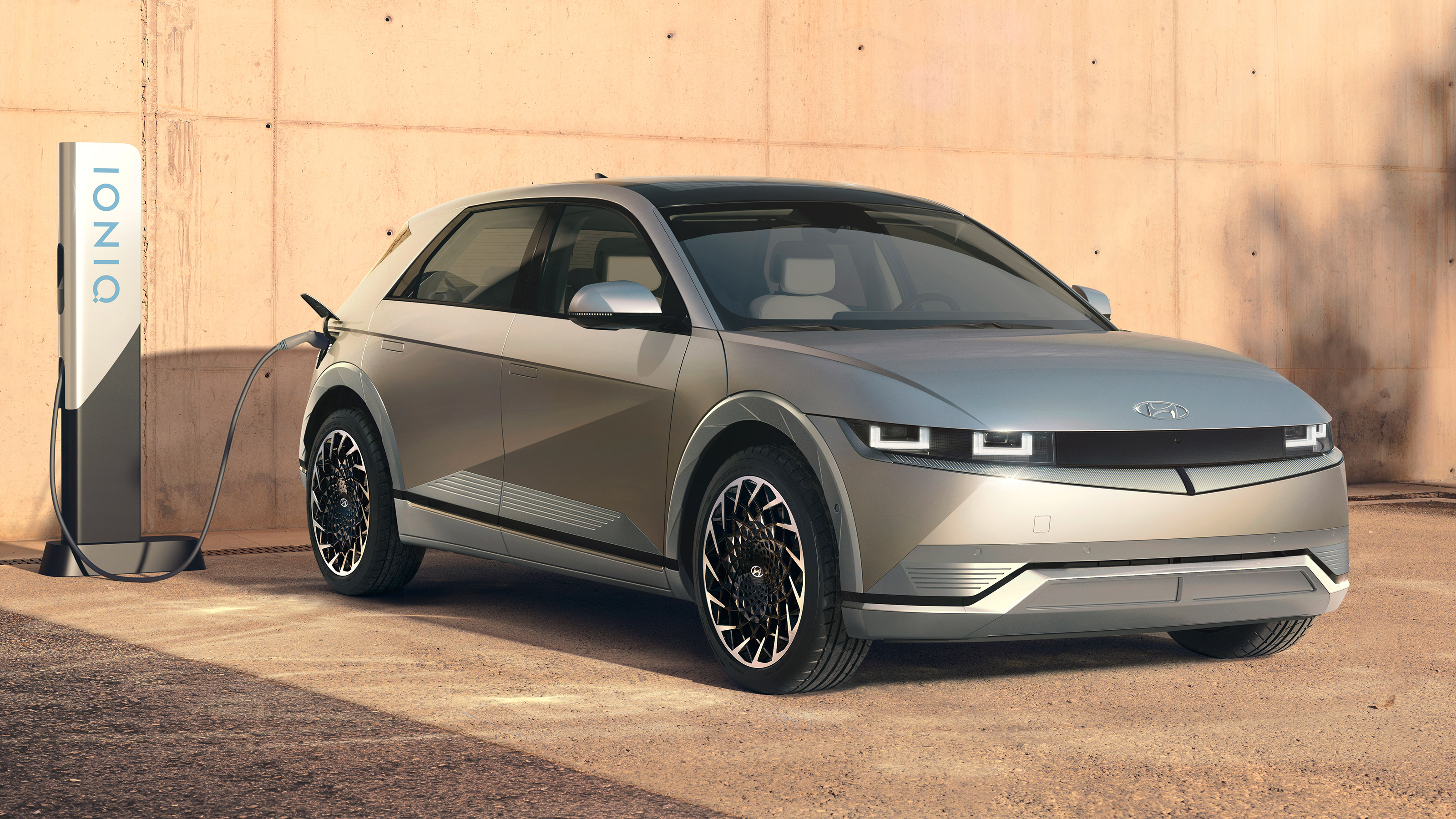 This is the Hyundai Ioniq 5, the first model from the Korean manufacturer’s new all-electric sub-brand and a car designed to take on everything from the Volkswagen ID.3 and ID.4 to the Tesla Model 3.

The Ioniq name has appeared on a single vehicle before, but the Ioniq 5 will spearhead a far grander assault on the market. It will be joined by a swoopy saloon and a full-height SUV within the coming years, as well as smaller models.

The 5 is a 4.6-metre-long hatchback although, like its rival the ID.3, the positioning of the battery pack in the floor lifts the passenger compartment to a height where Hyundai is actually referring to the body style as a crossover. The car is based on Hyundai’s all-new electric vehicle platform, called E-GMP. This is reflected in a particularly long wheelbase for a vehicle of this size; at 3,000mm it’s longer than that of an Audi A6, even though the new EV is more than 300mm shorter than the executive saloon overall. The wheelbase is also around 250mm longer than the ID.4’s, a potential key EV rival. Hyundai has confirmed that the suspension configuration is MacPherson struts at the front and a multi-link set-up at the rear.

The looks of the Ioniq 5 are inspired by a show car that Hyundai produced in the seventies. Based on the humble Pony hatchback, the Pony Coupe Concept was a striking sharp-edged creation penned by Giorgetto Giugiaro at ItalDesign. This, in turn, influenced the 45 Concept, a show car that previewed the Ioniq 5 back in 2019.

The production model doesn’t look quite as rakish as either concept – blame the battery pack in the floor for that – but it is still a striking creation from a company that is becoming increasingly confident in its design language. There are a number of new steps for Hyundai in its detailing, such as a clamshell bonnet and flush door handles, but the overall treatment is very clean and simple, without a great deal of fussy surfacing on the panels. The 45 Concept’s ultra-slim headlights have been transferred successfully, while a conventional front grille has also been replaced (due to the relative lack of demand for cooling in an EV like this) by a ‘sensor area’ that houses the hardware for the car’s driving assistance systems.

Hyundai’s head of design for Ioniq, Luc Donckerwolke, told us, “I didn’t want to do business as usual with this car. I wanted to give it a certain relevance by going back in the history of Hyundai – not a retro car, but taking the essence of that design.

“We tend to see, in the whole world now, design getting overloaded with elements. But the Pony Coupe was delivering me a car that had a clean, pure aura that I wanted to understand and project into the future.” Hyundai already has extensive experience selling pure-electric vehicles, with the Ioniq EV and the well-received Kona Electric. The Ioniq 5 takes that know-how and adds cutting-edge technology, some of which has never been available before at the car’s likely price point. For starters, the Ioniq 5 features an 800V battery system, meaning that it is capable of super-fast charging normally reserved for more premium vehicles. Hyundai claims that it can receive charging feeds up to 220kW, allowing the battery to be replenished from 10 per cent to 80 per cent of its capacity in 18 minutes. Customers would be able to add around 100km of range in five minutes, the company says.

In addition, the Ioniq 5’s charging system has bi-directional functionality. This is most likely to be used in the cabin, where a conventional 220V power socket will allow users to plug in a laptop, for example. But the car’s charging port – situated at the rearmost tip, beyond the back wheel – can also export charge as well as receiving it. So in theory, the 5 could provide electricity to another vehicle at up to 3.6kW via a conventional Type 2 cable.

The Ioniq 5 will be launched with a choice of two battery sizes, four power outputs and rear- or four-wheel drive. The entry point will be a 58kWh version that has a single rear motor producing 125kW and 350Nm for a 0-100km/h time of 8.5 seconds. The bigger-battery edition can hold 72.6kWh of energy and a beefier 160kW motor, although its torque figure remains the same. It can reach 100km/h in 7.4 seconds. There will be two four-wheel-drive Ioniq 5s on offer. The 58kWh version has a 120kW rear motor and an additional 53kW front motor, producing a combined 605Nm and delivering a 0-100km/h time of 6.1 seconds. And the flagship edition will have the 72.6kWh battery, 155kW at the rear and 69kW at the front, developing the same torque figure but punching the Ioniq 5 to 100km/h in 5.2 seconds.

Hyundai is being a little coy on official range figures – not least because the full line-up of Ioniq 5s has not been through certification tests. But the firm says that the longest-range version of the car will be capable of around 500 kilometres between charges.

This range can also be improved by a solar panel roof, which is likely to be offered as an option. The set-up can produce just over 200W of power and Hyundai says that in bright, sunny regions it could add up to 2,000km  worth of electricity per year.

The Ioniq 5 promises a further leap for Hyundai’s quality and materials in the cabin. There’s no conventional instrument cowl; it’s replaced by a 12.25-inch digital display that sits alongside a similarly sized infotainment system. An augmented-reality head-up display will project navigation instructions onto the ‘road ahead’, as viewed through the windscreen by the driver.

In an unusual move, the front seats can be completely reclined, allowing their occupants to, in theory, take naps while waiting for their car to recharge. The console slides fore and aft by 140mm, allowing the space to be customised. Rear passengers should benefit from slim front-seat backrests that boost leg room, plus a flat floor made possible by the lack of a transmission tunnel. The second row of seats also slides fore and aft, so the priority can shift between cabin space and boot capacity.

The boot offers 531 litres of capacity – comfortably clear of the space offered by most family hatchbacks – and this can be expanded to 1,591 litres with the second row of seats folded down. There’s also a small storage area beneath the bonnet that could be used for the charging cables; it measures 57 litres in single-motor versions, and 24 litres in four-wheel-drive editions.

The Ioniq 5 should go on sale in Australia during the 3rd quarter of 2021. No details have been issued on pricing, but Automotive Daily understands that the new car’s line-up should start roughly where the Kona Electric range stops.

Q: Why go for a retro-influenced design for a brand new model and sub-brand?

A: At Hyundai things go so fast that we never talk about what happened even last year – let alone further back. We always go forward; it’s the first time I arrived at a design studio to find there was no design archive.

So I knew the Pony had been designed by Giugiaro, but had never seen the Pony Coupe before. The model disappeared, the show car disappeared – and I was amazed by the fact that the roots were to be found in Turin. I don’t think what we have produced is retro, in fact; it has the purity and the construction of the shapes of the Pony Coupe. There’s a parallel between the beginning of Hyundai 50 years ago and a new beginning now.

Q: Those fully reclining seats are a novel feature. Do you seriously think people will take a nap in them while they wait for the car to charge?

A: Why not? We’re working so hard to reduce charging times, but why not invest some effort in making it relaxing? Sometimes you have to wait for a charger to be available, even before you can plug in. That 10 minutes of relaxing time can be golden, even if it’s only that period in the middle of a 650-kilometre journey. It’s really important.

We tried hard to make the cabin a more social place, because the younger generation want to spend more time with friends in the car. It’s a social habit thing, and we’ve been forced to pay more attention to that.

A: We can reduce the wheelbase, so further models are possible – shorter or longer, higher or lower. You will see more models coming.