This is the Audi A6 e-tron concept, which has made its world debut at the 2021 Shanghai Motor Show. The concept previews an all-electric model that will join the A6 family in 2023, based on Audi’s new PPE Premium Platform Electric architecture for electric cars.

It’s the first Audi on PPE we’ve seen, although it’ll be the second model to arrive because the firm’s Q6 e-tron is expected to go on sale next year.

The new PPE architecture allows what Audi calls “flat” cars – think saloons, coupes and estates – rather than just SUVs and higher-riding hatchbacks like those we have seen on the VW Group’s smaller MEB electric car platform. Audi’s own Q4 e-tron SUV and Q4 e-tron Sportback use that technology.

The PPE platform’s clever packaging allows for a flat floor, which means a lower roofline is also possible without compromising space inside, and the A6 e-tron is a strong example of this concept, according to Audi. The eventual production model will form part of the A6 family as well, but it’s not thought that the rest of the range will be updated to reflect the A6 e-tron’s styling, so while there will be an electric alternative badged A6, it will still keep some distance from Audi’s ICE and plug-in hybrid executive saloon line-up.

The PPE platform features a specially optimised five-link front suspension set-up, with a multi-link axle at the rear, both of which are controlled by adaptive air suspension on the A6 e-tron concept. It’s a sleek-looking four-door saloon that Audi refers to as a “Sportback” – the term it uses for the current A7. The A6 e-tron has more than a hint of that car’s looks in profile, with a sporty, sloping rear screen, which along with blanked-off grilles helps to achieve a very low drag coefficient of just 0.22Cd, improving aerodynamics and therefore efficiency.

The German brand hasn’t revealed any info on boot space yet, but given the PPE platform’s flexibility, with the wheels pushed to the extremes of the car’s bodywork to maximise packaging, the A6 e-tron should be the most spacious and practical member of the A6 family when it joins the line-up. At its unveiling of the A6 e-tron, Audi also hinted heavily that an all-electric Avant estate model will likely join the line-up too, with Johannes Arneth, part of the PPE platform’s development team, admitting, “PPE is definitely ready for that car and can serve that need.” Even in this “flat” car, as Audi calls it, the PPE platform still houses its battery in the floor between the front and rear axles. The A6 e-tron uses a 100kWh battery, which gives the car a range of “more than 700km”. It’s the most we’ve seen yet from any Audi EV.

The battery feeds a pair of electric motors in this concept, giving four-wheel drive and delivering a total output of 350kW and 800Nm of torque.

Audi hasn’t revealed a kerbweight for the A6 e-tron but says that “the most powerful members of the [A6 e-tron] family will sprint from 0-100km/h in less than four seconds,” while the instant torque of an electric motor means that “even entry-level models designed for efficiency will accelerate to 100km/h in less than seven seconds”.

Audi will offer other motors for its entry-level A6 e-tron production offerings, with a rear-drive version sitting underneath quattro all-wheel-drive models.

The PPE platform has been designed with 800-volt electronic architecture, which means that the A6 e-tron offers DC rapid charge capability at up to 270kW. As a result, the 100kWh battery can be charged from five to 80 per cent in just 25 minutes, while in just 10 minutes owners will be able to add 300km of range.

Although the A6 e-tron will launch after the as-yet-unseen Q6 e-tron, with that SUV also based on the PPE platform, we’d expect similar range and charging technology when it makes its debut later this year. Audi has been a pioneer when it comes to lighting – and the A6 e-tron concept is no different.

The car uses digital matrix LED headlights and digital OLED technology for its tail-lights, with a full-width bar that connects the two clusters. It means the lights can deliver plenty of brightness thanks to their power, but the signature can be slim and sleek. There’s even the possibility to customise the light signature.

The clever lighting extends to some safety features too, as the A6 e-tron features projectors on the sides and the corners of the car that display an image on the ground. This can include signals to warn cyclists that a passenger is about to open the door, or that the car is about to make a turn when on the move.

There’s an element of fun and personalisation to the system as well, as there are lighting effects to welcome users into the car when the doors are opened, with the projectors shining an image or a message onto the ground.

The headlights can actually project a picture onto a wall in front of the car too, so if parked up while charging, users can play video games using a blown-up picture on a surface in front of them, rather than on just the in-car multimedia screen. Players use their smartphone as a controller for the specially developed Audi game.

The rear digital OLED lights can be tailored so users can create custom animations and light signatures, with even Audi’s four-ring emblem made up by the LEDs. Tweaks to the lights have also allowed Audi’s engineers to add a 3D effect to the lighting.

Not all of this technology will likely make it to the production-ready A6 e-tron, but expect much of the lighting advances to be carried across when we see the final car; it’s likely to make its debut in 2022, with sales starting in 2023. 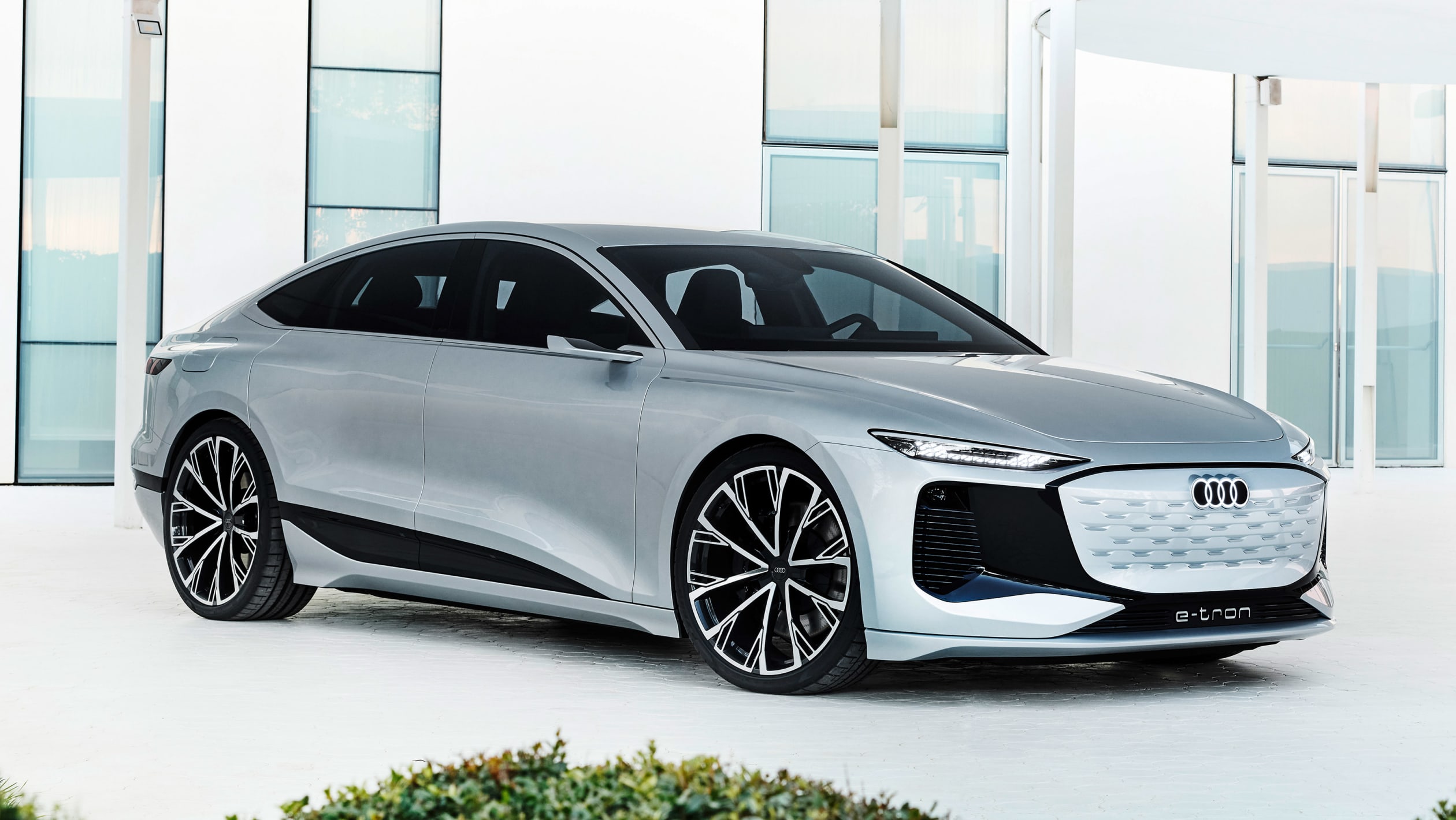