Audi has broken the Nurburgring lap record for compact cars with its new RS 3 sedan, with a time of 7:40.7 – cutting 4.6 seconds from the previous record held by the Renault Megane RS Trophy-R.

Key to the impressive lap time is Audi’s ‘torque splitter’ four-wheel drive technology, which debuts on the new RS 3. The system uses a multi-plate clutch on each rear driveshaft to send up to 100% of torque to either rear wheel. According to driver Frank Stippler, the torque-splitter has a profound benefit on track: “The new RS 3 is much more agile when driving from the middle of the curve to its end and when accelerating out of the curve. For me, the torque splitter is a quantum leap in terms of agile driving.”

Other than tyre pressure tweaks, no setup changes were made to the car before setting the record. This is partly due to the new car’s optional RS sport suspension plus system, which already includes a bespoke damping mode for bumpy circuits such as the Nordschleife. Optional carbon-ceramic brakes were also fitted to the car, saving 10kg over the standard steel items. Available in five-door Sportback guise to rival the Mercedes-AMG A 45 S and a four-door sedan, the new Audi RS 3 will start from around $89,000 when it goes on sale later this year.

Audi has already previously confirmed mechanical specifications for the RS 3 – including its clever new RS Torque Splitter rear differential – but this is our first opportunity to see the car uncamouflaged, as well as take a look at the interior. Reinforcing its status as the A3 range topper, the RS 3 features a new, wider single-frame grille complete with honeycomb mesh for its large air intakes that help cool the 295kW 2.5-litre five-cylinder turbocharged engine. The grille is flanked by a pair of standard-fit LED headlights; matrix LEDs, available as an option, will depict a chequered flag on unlocking the car.

There’s plenty of RS badging at the front and rear, while the car’s front wings feature large cut-out vents at the trailing edge of the panels to help expel air from the engine bay, plus the boxy flared wheel arches Audi’s RS products are known for to cover the car’s wider track width; it has been stretched by 33mm over its predecessor on the front axle. Redesigned black side skirts give the RS 3 extra visual presence, along with the new 19-inch alloy wheels with a 10-spoke Y design. Optional five-spoke Y-design alloys will be available.

At the rear, a deep bumper houses a central diffuser element and the RS 3’s dual-exit sports exhaust, which features variable flap control linked to the car’s drive modes.

This new generation of RS 3 is available in two exclusive colours, called Kyalami Green and Kemora Grey, while other visual options include carbon fibre on the side skirts, door mirror caps and the tailgate roof or boot lip spoiler on the hatchback and the saloon respectively. 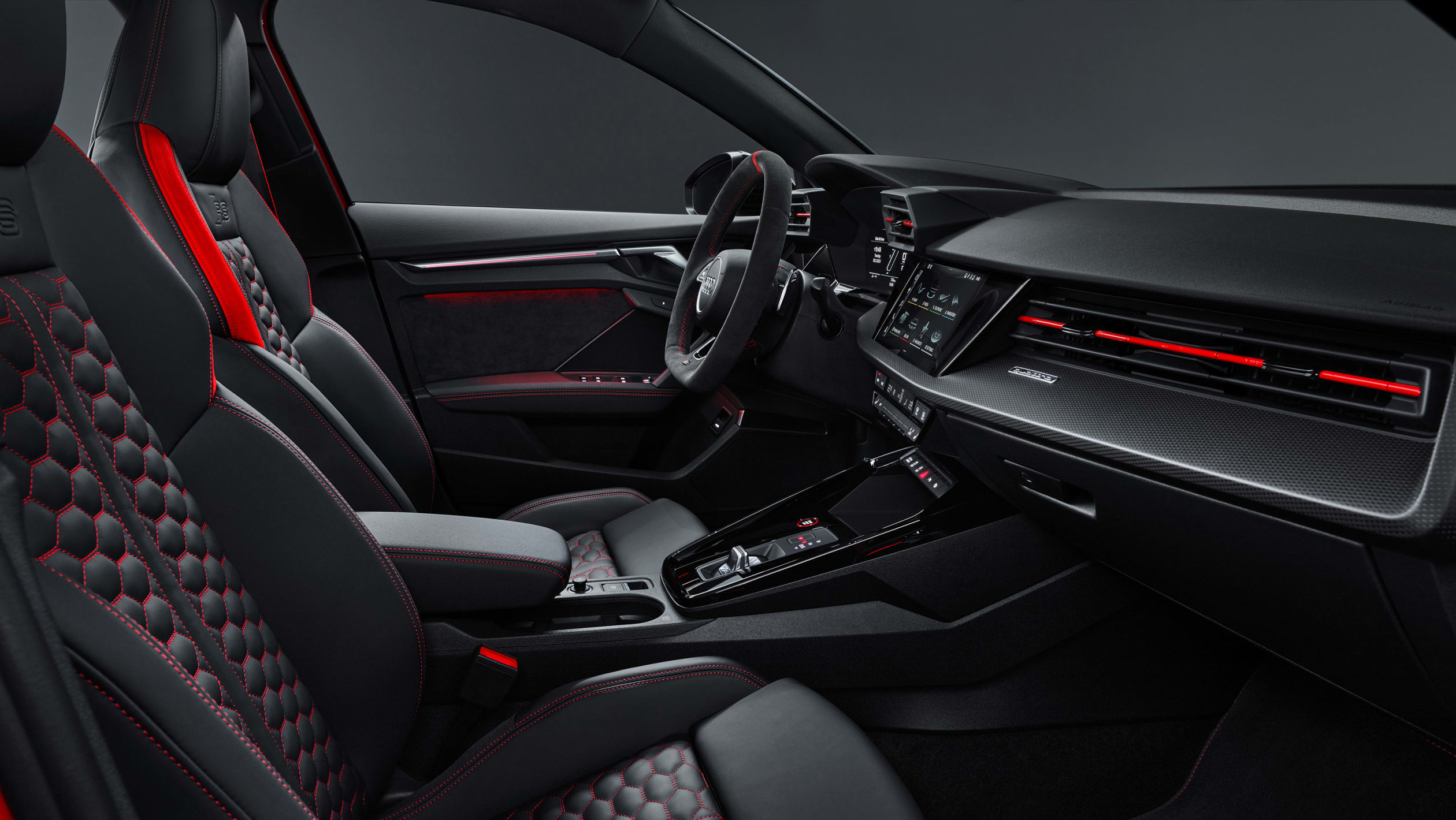 Inside, the RS 3 features more carbon fibre for the instrument panel, while specific RS sports seats embossed with the same logo fix the front occupants in place. Silver contrast stitching is standard but can be had in green too. A flat-bottomed three-spoke steering wheel with zinc-plated shift paddles also features.

There are updates to the infotainment as well, with a bespoke RS skin for the car’s 12.3-inch Virtual Cockpit plus digital dash, with a new ‘RS Runway’ option to display engine revs. The central 10.1-inch touchscreen also features Audi’s RS Monitor, which gives readouts on the tyre pressures, as well as the brake, differential, gearbox and engine temperatures. Of course, there’ll be plenty of personalisation potential, with the option to add more extras to customise the look of the car – and increase its price further still.

However, Audi has focused on broadening the engine’s power band so it now produces its maximum from lower down in the rev range – from 5,600rpm, sustaining it to a higher engine speed, now at 7,000rpm.

The maximum 500Nm torque output is produced from 2,250rpm to 5,600rpm, with the engine’s motive force sent to all four wheels through a seven-speed dual-clutch automatic gearbox and a new all-wheel drive system.

Combined with launch control,the RS 3 delivers a 0-100km/h time of 3.8 seconds (0.3 seconds faster than its predecessor), while top speed stands at 180mph if the RS Dynamic package and carbon-ceramic brakes are optioned, the latter saving 10kg over the standard steel items.

The new quattro four-wheel drive set-up features Audi’s RS Torque Splitter, a clever rear differential that can divert up to 100 per cent of the engine’s drive torque sent to the rear axle to one individual wheel. With no discernable difference in weight between this set-up and the previous RS 3’s Haldex four-wheel-drive tech (the five-door Sportback weighs 1,570kg, while the sedan comes in 5kg heavier), Audi claims the switch vastly improves the new car’s handling and dynamic ability.

The system is linked to the different driving modes. Comfort/Efficiency prioritises power to the front wheels, Auto mode sees the split balanced intelligently, Dynamic applies more torque to the rear to boost agility, while RS Performance mode ramps things up even further.

It is designed for track use, optimising the engine and transmissions settings, as well as using the RS Torque Splitter and torque vectoring to help reduce understeer and oversteer.

However, in the RS Torque Rear setting, torque is specifically directed to the outside rear wheel, allowing for controlled drifts and even more adjustability on the throttle. Three ESC modes (on, ESC Sport and off) determine how much drift angle the car will allow. Plenty of chassis tweaks compared with the S3 hot hatch allow for the RS 3’s increased performance. The car’s ride height is 10mm lower than the S3’s, while at the front the RS 3 uses MacPherson strut suspension with unique pivot bearings, strengthened lower wishbones and a more rigid subframe.

Adaptations at the rear to accommodate the new RS Torque Splitter diff include a multi-link axle design with separate springs and shock absorbers, a bespoke subframe and a new anti-roll bar.

There’s also more negative camber for the RS 3 (just under one degree at the front and half a degree more at the rear), while reinforced wheel carriers help cope with the increased lateral loads from the new car’s extra grip.

A passive suspension set-up is standard with specific tuning for the RS 3, while the optional ‘RS sports suspension plus’ features adaptive dampers. The latter system is linked to the driving modes, with ‘comfortable’, ‘balanced’ and ‘sporty’ damping profiles available.

An RS-specific variable steering ratio set-up varies the speed of the steering depending on the steering angle, helping stability around the straight-ahead but boosting turn-in response in corners.