Hot on the heels of the new Ferrari 296 GTB will be a drop-top variant, which has been spotted on public roads for the first time.

The prototype snapped by our photographers wears characteristically heavy camouflage, but it’s clear that the open-roof 296 will be nearly identical to the already-revealed coupé when its roof is closed.

In keeping with Ferrari nomenclature tradition, it will likely be called the 296 GTS, arriving to join the Portofino M, F8 Spider, 812 GTS and SF90 Spider as the newest and final member of Maranello’s convertible line-up. It’s not anticipated that the new Roma coupé will gain a convertible option, given its close mechanical relationship to the Portofino.

The 296 GTB draws heavily on styling cues taken from the SF90 Stradale flagship, and as such the convertible version looks to use a similar roof-opening set-up to the SF90 Spider.

The roof itself is likely to be made of aluminium to save weight and space and could be retracted in as little as 14sec. Like the SF90 Spider, the 296 GTS is expected to feature a small rear screen that can be raised or lowered on demand. 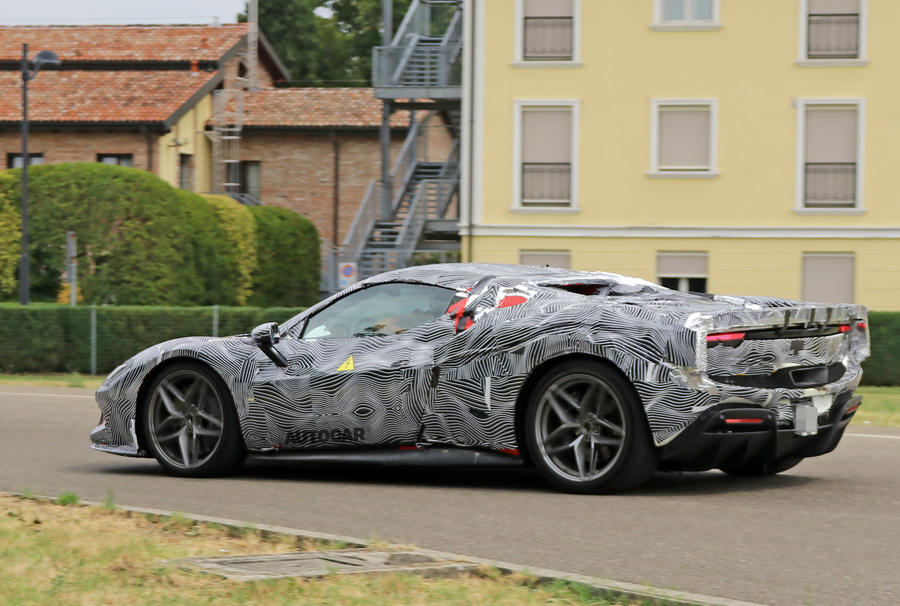 Otherwise, it will be mechanically and technically identical to its coupé sibling, meaning power will come from a twin-turbocharged 3.0-litre V6 engine and an electric motor inside the eight-speed automatic gearbox.

All in, the system produces 610kW; and because Ferrari convertibles are so closely matched in performance terms to their fixed-roof siblings, the 296 GTS should crack the 0-100km/h sprint in around 3.0sec and hit a top speed of more than 330km/h.

There has been no official word on a scheduled unveiling, but Ferrari tends to leave a gap of roughly six months between coupé and convertible variants, so the wraps are likely to come off around the end of this year. As for price, we expect the 296 GTS to command a premium of about $60,000 over the GTB and for customer deliveries to begin in the second half of 2022.