First official shot of rugged reborn 4×4 icon appears online ahead of reveal at 10am AEST tomorrow.

Ford is finally set to reveal the long-awaited rebirth of the Bronco name tomorrow morning, but the first official reveal image has leaked online in advance.

Published over the weekend on the Bronco6G fan forum, the image tallies with a previous leaked shot by a Ford insider at one of its US facilities. This time, we can see the two-door model, featuring the same bluff front end but a significantly shorter body and wheelbase. It also features a Jeep Wrangler-style removeable roof.

Ford has confirmed the car’s reveal time will be 8pm Eastern Daily time in the US, which is 10am AEST. Like most reveals during the pandemic it will be a wholly online affair, streamed across Disney TV channels ESPN, ABC and National Geographic.

Earlier this year, a four-door Bronco was leaked alongside its smaller, more road-focused sibling; the Bronco Sport. The leak stemmed from another forum post, with the images seemingly taken on a smartphone by somebody deep within Ford’s US facilities. 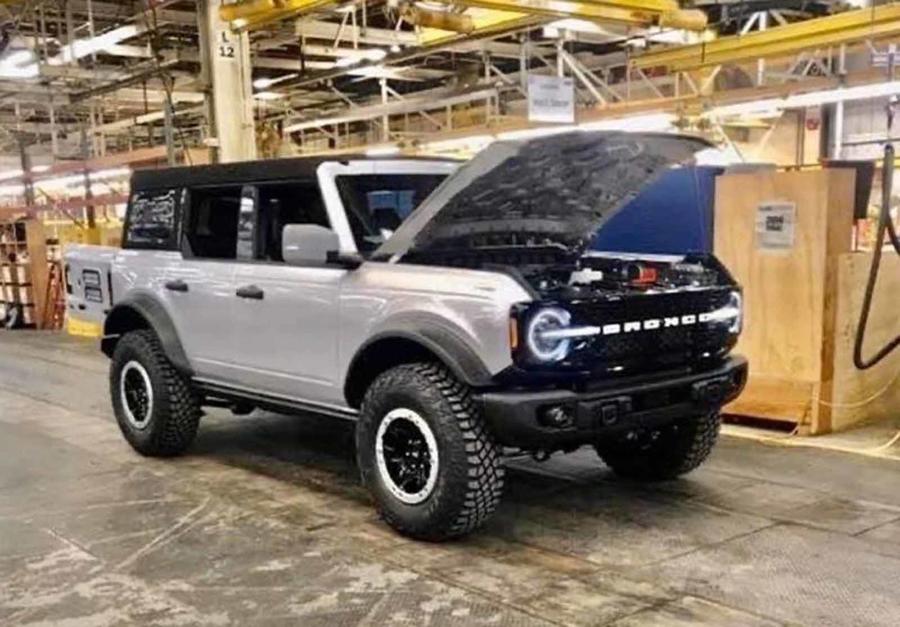 It showed what looks like the full-size car in physical prototype form, with styling very similar to that seen in previous images leaked from an earlier behind-closed-doors dealer presentation.

Aimed to compete directly with the rugged Jeep Wrangler, the new Bronco will launch in both two and four-door forms, with a pick-up truck version possibly following later to rival the Jeep Gladiator.

Side mirrors mounted to the A-pillars and a ‘floating’ third brake light above the rear-mounted spare wheel seen in earlier disguised prototypes also suggest a version could arrive with a removable roof and removable doors.

Power could come from Ford’s turbocharged 2.3-litre four-cylinder petrol engine or turbocharged 2.7-litre V6, paired with a 10-speed automatic gearbox. A manual version is also rumoured and a hybrid version could arrive later.

Despite Australia’s enthusiastic appetite for dual-cab utes and four-wheel drives, Ford Australia has confirmed the Bronco will not come here – an unfortunate circumstance given its Ford Ranger underpinnings.

Automotive Daily’s exclusive partner Autocar also understands that the Bronco won’t be offered in Europe or the UK, confirming RHD for now is off the table.

US delivery of customer cars could commence before the end of this year.

Ford design chief Moray Callum is retiring after seven years at the helm, to be succeeded in the role by Renault's Anthony Lo. Callum, brother of...
Read more
Facebook