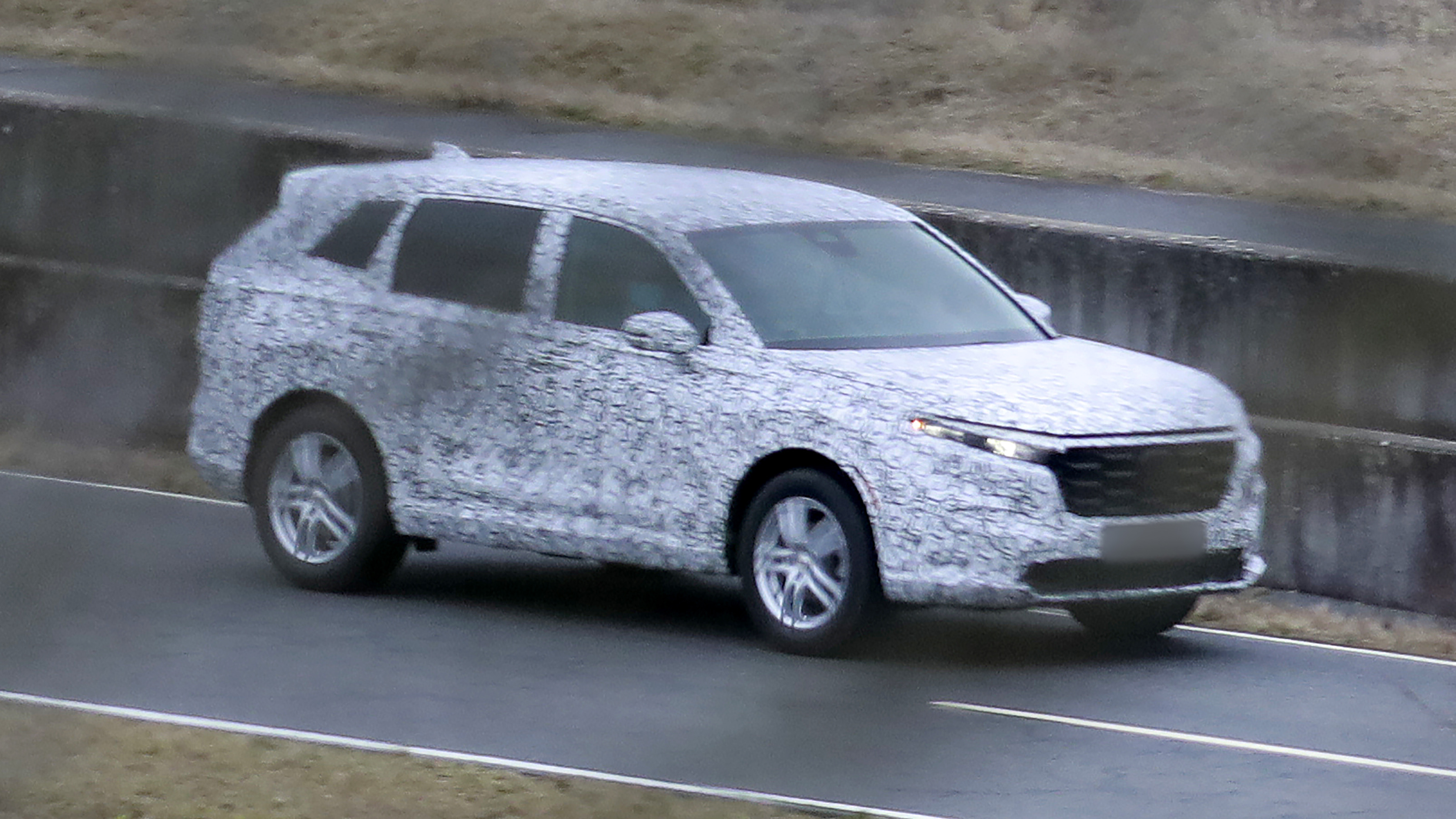 In a bid to offer even more practicality the new 2023 Honda CR-V family SUV will grow in size as it evolves into its sixth generation.

Our spy photographers have captured the new CR-V testing, and you can see from the pictures that the Japanese brand’s rival to the Nissan Qashqai will grow in size, while a hybrid-only engine line-up is likely.

The current CR-V was only launched in 2017, but the Japanese brand works to shorter timescales than most European manufacturers, meaning the Mk6 SUV could arrive in showrooms as soon as 2023.

Despite the car’s camouflage, we can see the new Honda’s bigger body, which means it’s likely to be offered with seven seats, as per the current car. However, with more space available this will boost practicality further and offer families plenty of flexibility.

A relatively squared-off tailgate means there should be a good level of boot space. We expect the new sixth-generation CR-V to surpass the current car’s 497 litres.

The new car is expected to be based on the same platform as the new Civic hatchback, and while there’s no indication of what powertrains might be fitted under the new CR-V’s long, flat bonnet, given Honda has ditched pure-combustion-engined power with its new HR-V we’d expect a similar commitment with the upcoming CR-V as part of the brand’s aim to electrify all of its mainstream models by 2022. Despite the brand’s exploits with electric drive in the Honda e city car, it could be a little early for a fully electric CR-V, but we’d expect an updated and optimised version of Honda’s e:HEV drivetrain in the current CR-V, featuring a 2.0-litre petrol engine and a pair of electric motors. One is linked to the engine and is used to charge the CR-V hybrid’s battery, the other drives the wheels directly.

The petrol engine is able to drive the wheels directly as well, through a clever CVT automatic gearbox. Both two and four-wheel drive options could be offered.

It’s thought that the current CR-V’s 1.5-litre VTEC petrol engine won’t be offered in favour of a hybrid-only powertrain line-up. As electrification becomes evermore important to this sector, with rivals like the Nissan Qashqai moving towards a fully electrified offering, the CR-V will likely do the same. Inside, the new CR-V should feature the same layout as the eleventh-generation Civic, with a new twin-dial digital instrument cluster ahead of the driver and a nine-inch infotainment system on the dash. The car’s climate controls will be mounted beneath the screen, sectioned into three dials, for a much cleaner and less cluttered look.

We’ve not yet seen any signs of the new CR-V’s interior, but one area where we’d expect the new car to take a big step forward is the infotainment. The Honda e started the Japanese brand’s in-car tech revolution, while the hybrid Jazz supermini and now the HR-V use similar technology. Honda’s latest systems are much slicker and reactive, with more features too.

The new sixth-generation Honda CR-V is likely to go on sale next year, with prices set to be a small increase over the current CR-V Hybrid.