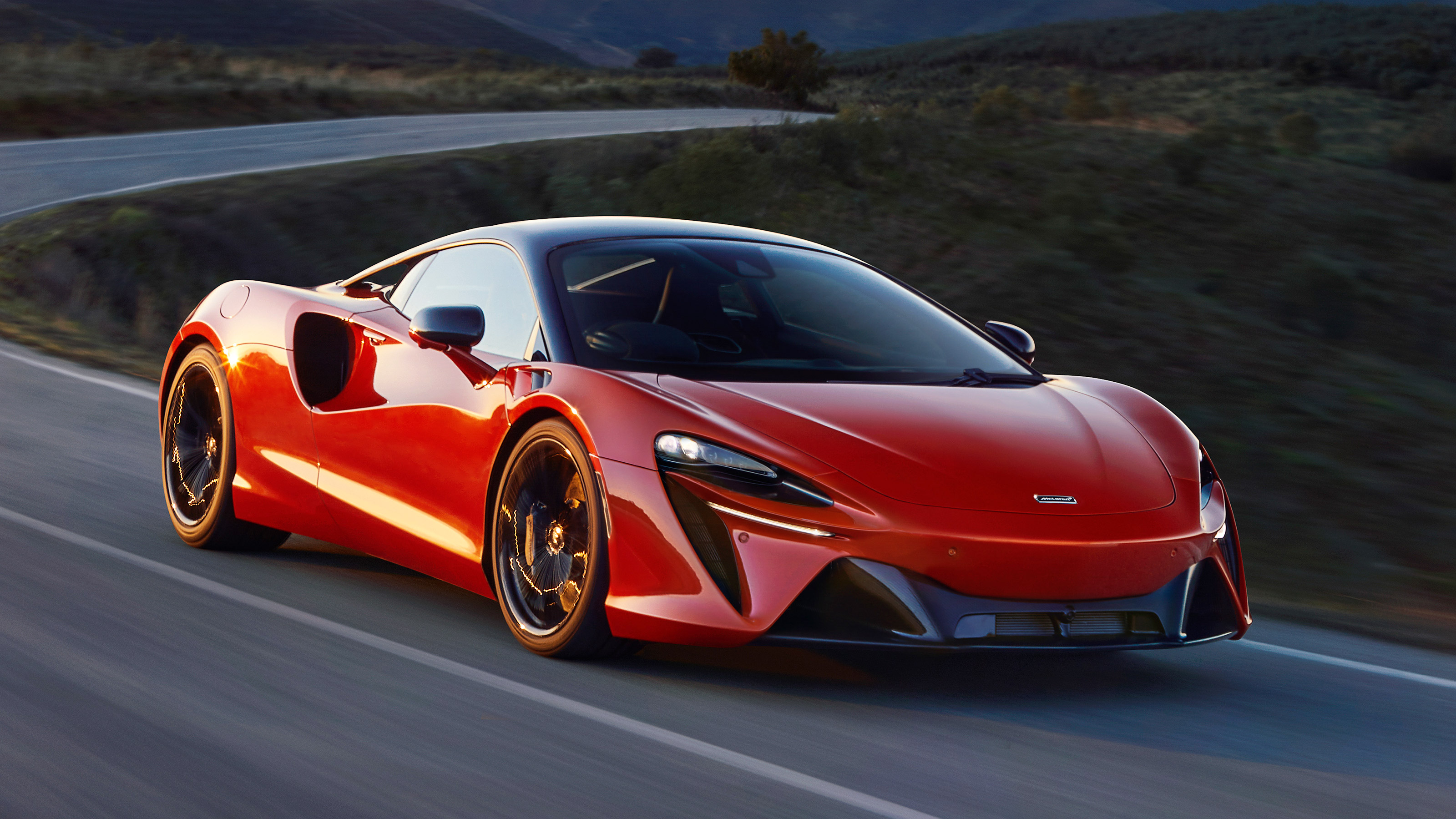 McLaren’s race towards electrification starts here with the new Artura, what it refers to as its first High-Performance Hybrid model.

The McLaren Artura replaces the Sports Series cars based around the 570S and sits below the 720S and 765LT models in the Supercar range. Below the Supercars sits the McLaren GT and above are the Ultimate models comprising limited-run cars like the Senna, Speedtail and Elva.

The new model debuts a host of new technologies, not least a whole new platform, dubbed MCLA – McLaren Carbon Lightweight Architecture – which the company says is stronger, safer and lighter than the previous carbon fibre tubs. At the heart of Artura is a new 3.0-litre twin-turbo V6 engine offering 430kW and 585Nm. It’s boosted by 70kW from the plug-in hybrid system; an electric motor powered by a 7.4kWh battery, which allows the car to be driven on electric power alone for up to 19 miles. Total combined outputs are 500kW and 720Nm.

The electric motor is also said to provide a torque infill and improve throttle response, while dropping official CO2 figures to 129g/km with a claimed average fuel economy figure expected of more than 50mpg – remarkable figures for a car that will get from 0-100km/h in 3.0 seconds, 0-200km/h in 8.3 seconds and on to a top speed of over 320km/h. The MCLA technology has been optimised for electrification – hinting at further, faster electrified McLarens to come – and has the aim of making the Artura “thrilling to drive, but easy to live with,” according to McLaren.

The car is super-lightweight, considering the electrical tech on board, with a dry weight of 1,395kg – sharp throttle response was a key drive during the programme.

Also important has been improving reliability and cost of ownership – obviously following feedback from McLaren owners – and that’s backed up by a five-year warranty on the car, plus six years cover for the battery and 10 years for the body.

There’s a step up in perceived quality inside the car, while manufacturing processes have been improved – again to improve longevity – while the car features 25 per cent less cabling than previous Sports Series models. Convenience is something McLaren has also focused on, too, proving that the Artura won’t only be about performance. The new eight-inch infotainment system even features Apple CarPlay and Android Auto functionality, while adaptive cruise control and over-the-air updates will also be available.

The new engine, sitting just behind the driver and passenger, is 50kg lighter and 150mm shorter than McLaren’s V8 and features a 120 degree V angle allowing the twin turbos to sit inside the ‘hot vee’ to keep the centre of gravity low. The red-line is at a spine-tingling 8.500rpm.

The engine drives the rear wheels through a new 8-speed twin-clutch automatic gearbox (with manual override, of course), with the e-motor housed within the transmission hub. The car’s broad footprint features a wheelbase stretched to 2.64m with minimal front and rear overhangs, while a new multi-link rear suspension features along with a lightweight electronic differential – a first for McLaren. Tyres are bespoke Pirellis with noise-cancelling tech and an electronic chip to feed info back to the car’s computers, and they wrap 19-inch wheels at the front, 20s at the back. Style-wise, the look of the Artura features what Design Director, Rob Melville, told us was a “maturing” of the McLaren design language. “There were three phases to the design,” he said. “Purity, technical sculpture and functional jewellery.

“The bodywork is shrink-wrapped around the car so it’s very natural.”

What Melville refers to as McLaren’s “signature hammerhead line” features at the front with deeply recessed LED headlights. DRLs sit beneath them on the ‘hammerhead’ bodywork, above carefully-sculpted air intakes.

Melville and his team have worked hard to reduce the number of shut lines around the bodywork and that’s clear along the sides, which are dominated as usual by large air intakes at the back of the dihedral doors. At the rear, slim almond-shaped LED lights take care of tail, brake and indicator signalling and sit within a black grille either side of the high-mounted exhaust. With the exhaust up high, the large, full-width rear diffuser is able to get on with its work unfettered.

Overall, while the technology breaks new ground for McLaren with electrification at the heart of performance and efficiency, plus more of a focus on being able to use the Artura daily, the look is nothing new. First deliveries are expected in the third quarter of this year.