The next-generation Mercedes SL will get a technology upgrade, 2+2 seating and a fabric roof.

The next-generation Mercedes SL roadster will be officially unveiled next month before its official launch. The new car will represent a reinvention for the model, with an all-new exterior design bearing the brand’s signature ‘Panamericana’ front grille. The car will have a 2+2 seating layout and a dashboard design incorporating the brand’s latest interior technology, which is shared with the new S-Class and C-Class.

Mercedes-Benz Australia has confirmed to Automotive Daily that it will arrive locally in the second half of 2022 with pricing and specifications to be announced closer to then. 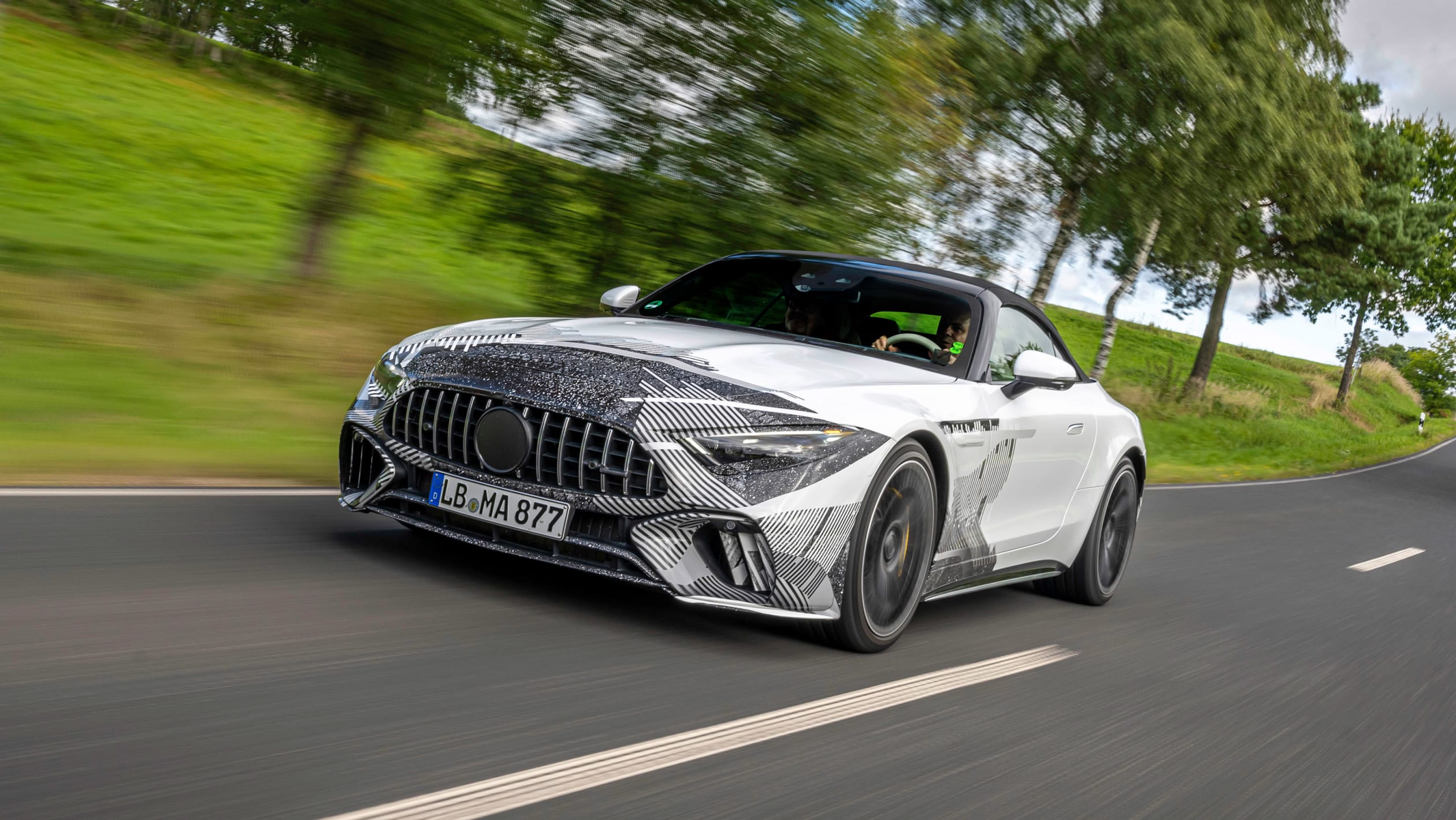 According to Mercedes, the interior of the new seventh-generation SL will be “driver focused” and feature a digital twin-screen setup. The new car has been developed by Mercedes’ AMG performance division and uses a new platform and a lighter body. The SL will get four-wheel drive for the first time in its history.

When it launches, the new SL will effectively replace the now-discontinued Mercedes S-Class Cabriolet. Prices are likely to start at around $160,000 in Europe and the SL will be a direct rival to the BMW 8 Series Convertible.

Ahead of the car’s full reveal in October, we’ve taken a passenger ride to see how Mercedes’ new flagship convertible is shaping up. Read on for everything we know so far.

In these latest images, the AMG influence on the styling of the SL is clear to see. The nose of the car is dominated by a wide ‘Panamerica’ radiator grille, while at the rear the AMG signature rectangular quad exhaust system features. The front of the car is angular, with sharp vertical bonnet creases, large air intakes and an upswept, slim headlight design. Large alloy wheels are also fitted, with a wider set on the rear, along with flared front and rear arches to accentuate the car’s low, aggressive stance. A rear diffuser is visible through the camouflage and an electronically deployable rear spoiler also features, which houses the uppermost brake-light cluster.

The biggest change for this model, however, is the fabric roof that replaces the metal folding unit of the old car. In these preview images, it’s clear that it gives the SL a sleeker profile than before, with a rakish design similar to the latest Porsche 911 convertible. The boot should also be bigger because a folded fabric roof is more compact than a folded metal version. Switching to a soft top brings weight and centre-of-gravity benefits, too.

Mercedes has already released a series of official images confirming the interior of the new SL will receive a much needed refresh. It follows the lead of the latest S-Class and C-Class, with two digital screens. A 12.3-inch digital dial cluster is fitted and is integrated into a visor to prevent reflections when the roof is down.

The main infotainment touchscreen is a 11.9-inch portrait unit mounted in the centre console. It features electrical adjustment, meaning drivers can adjust the angle to prevent glare. This dual-screen setup runs Mercedes’ latest MBUX system, as already seen in the new S-Class, but with AMG-specific features including the Track Pack and Performance settings. The rest of the interior looks similar to the brand’s recently updated models, with a new three-spoke steering wheel, propeller-style air vents and ambient lighting. The front seats are a new compact design and buyers will be able to pick from a range of trims including two-tone nappa leather or a mix of nappa leather and Dinamica fabric.

As a flagship model, we’d expect the new SL to get all of Mercedes’s latest safety technology, including features like adaptive cruise control, traffic-sign recognition and a driver alertness monitor. New driver assistance tech is likely to include blind-spot monitoring and lane change assist.

According to Mercedes, the underpinnings of the new SL is constructed from a mix of aluminium, steel, magnesium and fibre composites to reduce weight, with the bare platform pictured above weighing in at only 270kg.

The platform’s design is entirely new from the ground up, with no parts or elements carried over from current or outgoing models. The body is more rigid than the current AMG GT Roadster model as well, with 50% more rigidity across the width and a 40% improvement across its overall length. Mercedes says the car’s rigidity improvements make it more agile to drive and more precise, with less body lean during cornering. 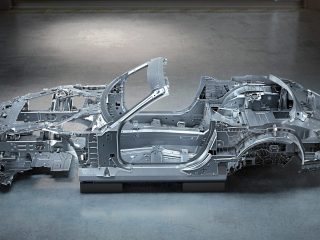 Further improvements have been made to make the new SL better to drive, including a lower centre of gravity. To achieve this, the engine sits lower and closer to the centre of the car. Mounting points for the front and rear axles and subframes are lower than before too.

The engine range is likely to start with an entry-level SL 43 model powered by a 3.0-litre six-cylinder engine, while a more powerful SL 63 model is likely to use the 450kW twin-turbocharged V8 petrol engine from the E63 line-up.

It’s thought mild-hybrid technology will feature, and a plug-in hybrid can’t be ruled out either. Mercedes is working on an electrified powertrain with around 600kW for the AMG GT 4-door, and this seems a strong candidate for the SL – especially as AMG will produce hybrid models of every car it launches.

While the popularity of the SL has gradually declined in the past two generations, the iconic model remains a priority for Mercedes. That’s why for this latest model the brand has started with a completely new design, while also putting the AMG performance division in charge of the car’s development. Part of starting from scratch means the SL sits on an entirely new aluminium-space frame chassis, giving it a new 2+2 seating layout. To accommodate the extra seats, the gearbox has been moved to the front of the car behind the engine. This configuration change puts the driver’s seat virtually in the middle of the car, improving both visibility and manoeuvrability.

From the passenger seat of the SL 63 S prototype, it’s immediately obvious that the re-engineering has improved the car. It feels more precise than the softer approach of the previous-generation model, with vastly improved grip and minimal body lean in corners. On our road test route in Germany, the SL was smooth and refined with the chassis soaking up most of the road imperfections. It felt very secure at all speeds, with only the switch to Sport Plus model making it feel firm. On the twisty roads leading to the Nurburgring, AMG Chief Technology Officer Jochen Hermann described the steering as secure and precise, with the car flowing through several corners calmly without any sign of understeer. The biggest surprise is the turning circle; which thanks to all-wheel steering means the five-metre long SL can be turned around like an A-Class hatchback.

While Mercedes wouldn’t talk about the engine, it was obvious from the growling exhaust note that the familiar 4.0-litre V8 AMG unit sits under the bonnet. It lacks the aggressiveness of the GT model  but it certainly felt quick enough in our SL 63 S prototype.

From this brief passenger ride, it’s obvious the new SL has made the transition from grand tourer to genuine sports car. Despite this, it’s still smooth and refined, and easier to drive and more engaging than the current AMG GT.