Morgan has publicly shown its Morgan Plus 8 GTR for the first time, a nine-strong special edition of a car which officially bowed out three years ago.

Morgan says the GTR is a “gloves off” version of the Plus 8, with the project made possible after several chassis earmarked for an external project, believed to be the Bristol cars revival, were reacquired.

The first finished car was on display at Bicester Heritage’s ‘Undercover Assembly’ yesterday, and is destined for a Danish customer. The other eight cars will be finished during the next three months or so. Each will undergo an Individual Vehicle Approval test to be certified road legal. Power comes from a 4.8-litre BMW N62 V8, although Morgan suggested that output from the recommissioned units would be higher than the 270kW achieved in their original specification. Six-speed manual and automatic transmissions will be offered, as well as left- or right-hand drive, although allocations for these are fixed for the production run based on the existing chassis. The chassis are completely unused, having been built by Morgan before 2018. The company says some mechanical components have been upgraded for use in the Plus 8 GTR. “Reviving a V8-powered Morgan at the current time may not seem like the obvious choice for a manufacturer firmly focused on new platforms and powertrains,” Morgan’s head of design, Jonathan Wells told Automotive Daily’s exclusive partner Autocar. “However, when the opportunity presented itself to recommission a number of rolling chassis and create an exciting special project such as Plus 8 GTR, we embraced it fully. 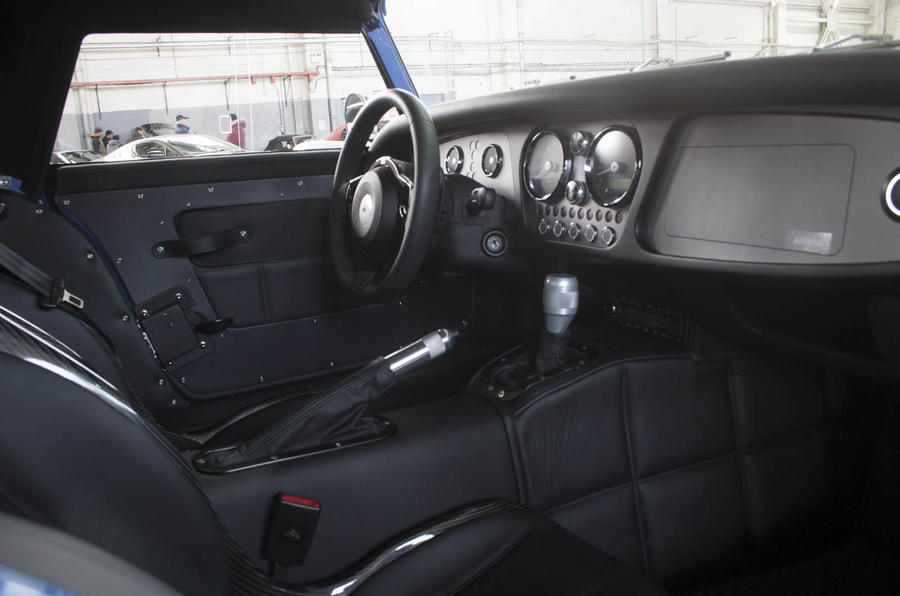 “This project has allowed Morgan’s design and engineering teams to revisit some of their favourite elements of past Morgan models, as well as experiment with some features that we hope will appear on future Morgan cars.” Morgan’s design and engineering teams have been told to “let their imaginations run wild” for the GTR, with inspiration coming from the ‘Big Blue’ GT series racer of the 1990s. That vehicle was used as a test bed for the bonded-aluminium chassis tech that later replaced Morgan’s traditional steel chassis in 2004. The GTR has new doors with a high shoulder line “not seen on a traditional Morgan body for decades”. The wheel arches have been re-sculpted and the five-spoke centre-lock wheels are a nod to the Plus 8’s racing heritage. There is a larger diffuser on the rear end, new front wings with vents for the first time and a large front splitter, with a new hard-top replacing the original fabric item. Every example of the GTR will be handcrafted using traditional coachbuilding techniques, but in a break from tradition, production will take place at the Morgan Design and Engineering Centre (M-DEC).

Customers have been given the chance to create a bespoke Plus 8 GTR with the help of Morgan’s design team.