Is the Porsche Taycan 4S better than the Turbo S? 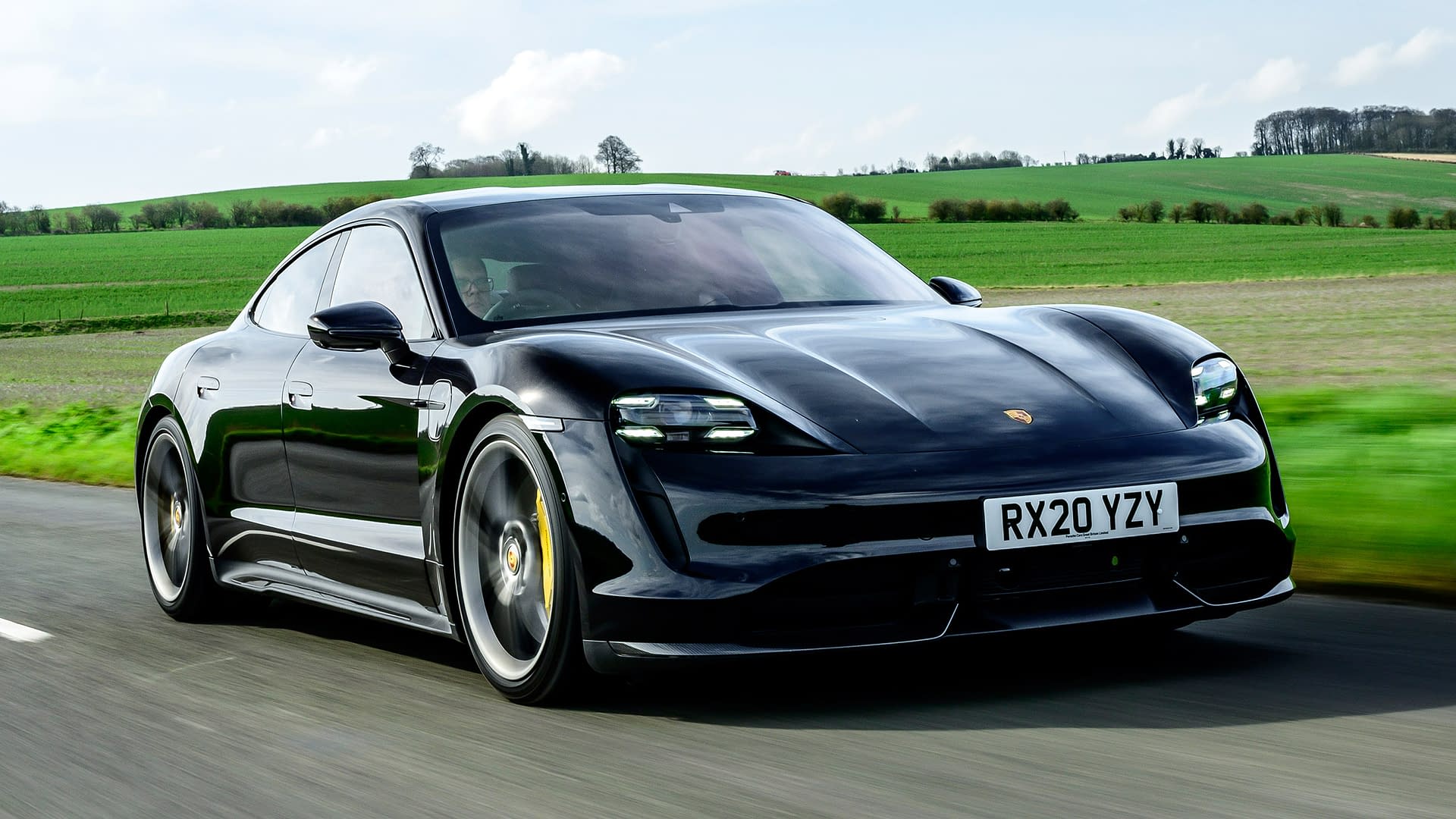 This isn’t just a car, it’s a point proven. A flag planted in the enthusiast heartland, stating firmly that electric cars are not only fun, but also textural and playful – worthy of the Porsche badge and the purists that worship it.

We know this, because we drove the Taycan last year and found it to be as era-defining as you’d expect. But now we’ve driven it in range-topping Turbo S guise on ‘normal’ roads. And let’s face it, there’s got be a question mark over how a car with 560kW and a 2.3-tonne kerbweight feels on narrow and poorly-sighted roads we commonly see.

Well, fear not – it’s still manageable, even as it makes you skwee hysterically. Let’s point out that in normal use the Turbo S has ‘just’ 460kW; it’s only in Launch mode that it gets the full, neck-straining 560kW. And while the fact that it’ll launch itself from 0-100km/h in 2.8 seconds is eye-widening, it’s the ride and handling that elevates the Taycan to another level. 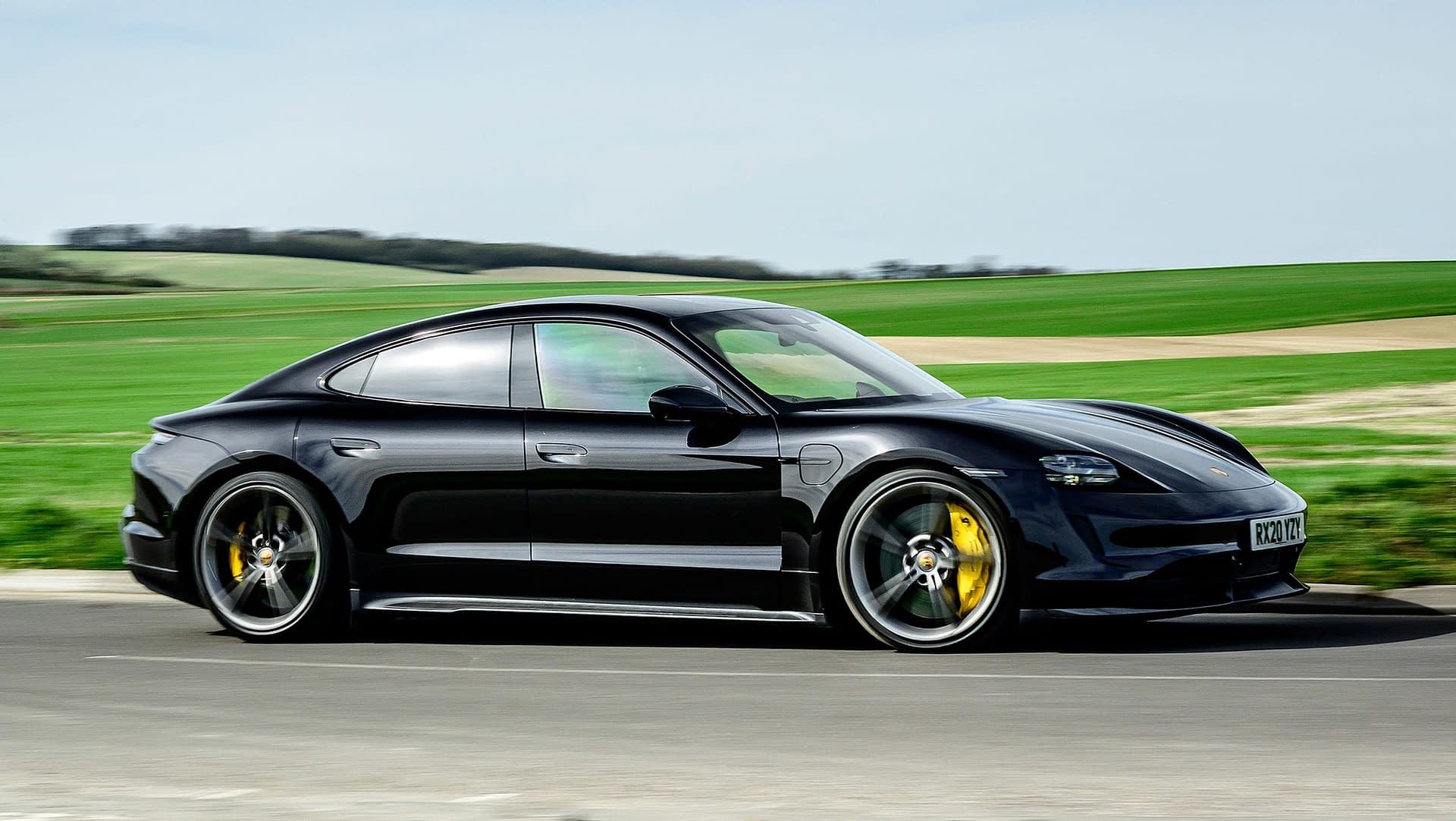 With two electric motors (one on each axle), two gears on the rear motor and a liberal sprinkling of Zuffenhausen magic, the Taycan handles with a deftness that a heavy, four-wheel-drive car has no right to. The sharp turn-in is enhanced by a willing mobility to the rear axle that leaves you in no doubt that there is more power pushing you through the corner than pulling you out of it.

Helped by the optional active anti-roll bars (Porsche Dynamic Chassis Control to those in the know) on our test car, the playful handling is also unintimidating, thanks to the level of communication you get. You’re aware of the plentiful traction there is to play with, but you can still choose to provoke the Taycan and explore the edgier responses. Or just stick it through a corner and revel in the neutrality, as well as the dialled-in sensitivity and feedback. 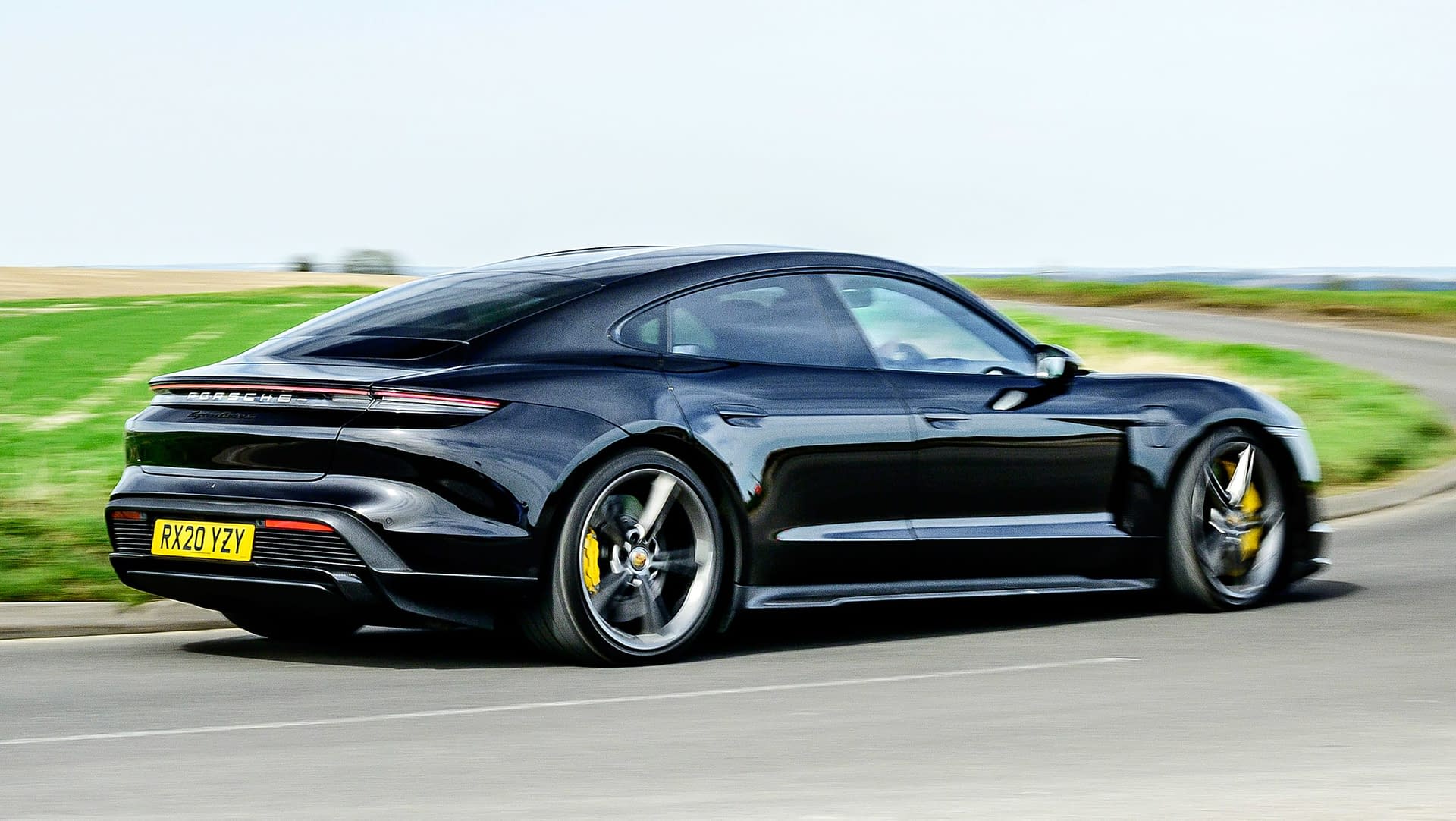 This is all aided by standard adaptive air suspension that keeps the Porsche composed even over scruffy roads. In fact, it’s this tightly controlled yet pliant damping that makes the Taycan great on country roads. Even mid-corner bumps don’t unsettle it, and of course it also means that it’s an exceptionally relaxing cruiser. We’d like steering wheel paddles to more easily adjust the brake-regeneration, but otherwise there’s little to criticise in the way the Taycan goes down the road.

If we’re looking for flaws, then the ride delivers noticeable vertical bobbing in Sport+ mode, while the steering weight also gets a notch too meaty; Sport mode feels more natural and enjoyable. Alternatively, just stick it in Normal for the everyday commute when you can enjoy the outstanding infotainment system and refinement.

The Taycan will hop continents without breaking a sweat should you want it to, helped by a range of up to 413km from a usable battery capacity of 83.7kWh (from 93.4kWh total). Of course, rapid charging of up to 270kW means you can add a 10-80 per cent charge in under 20 minutes, but you’ll have to find one of the rare super-rapid chargers to do it. 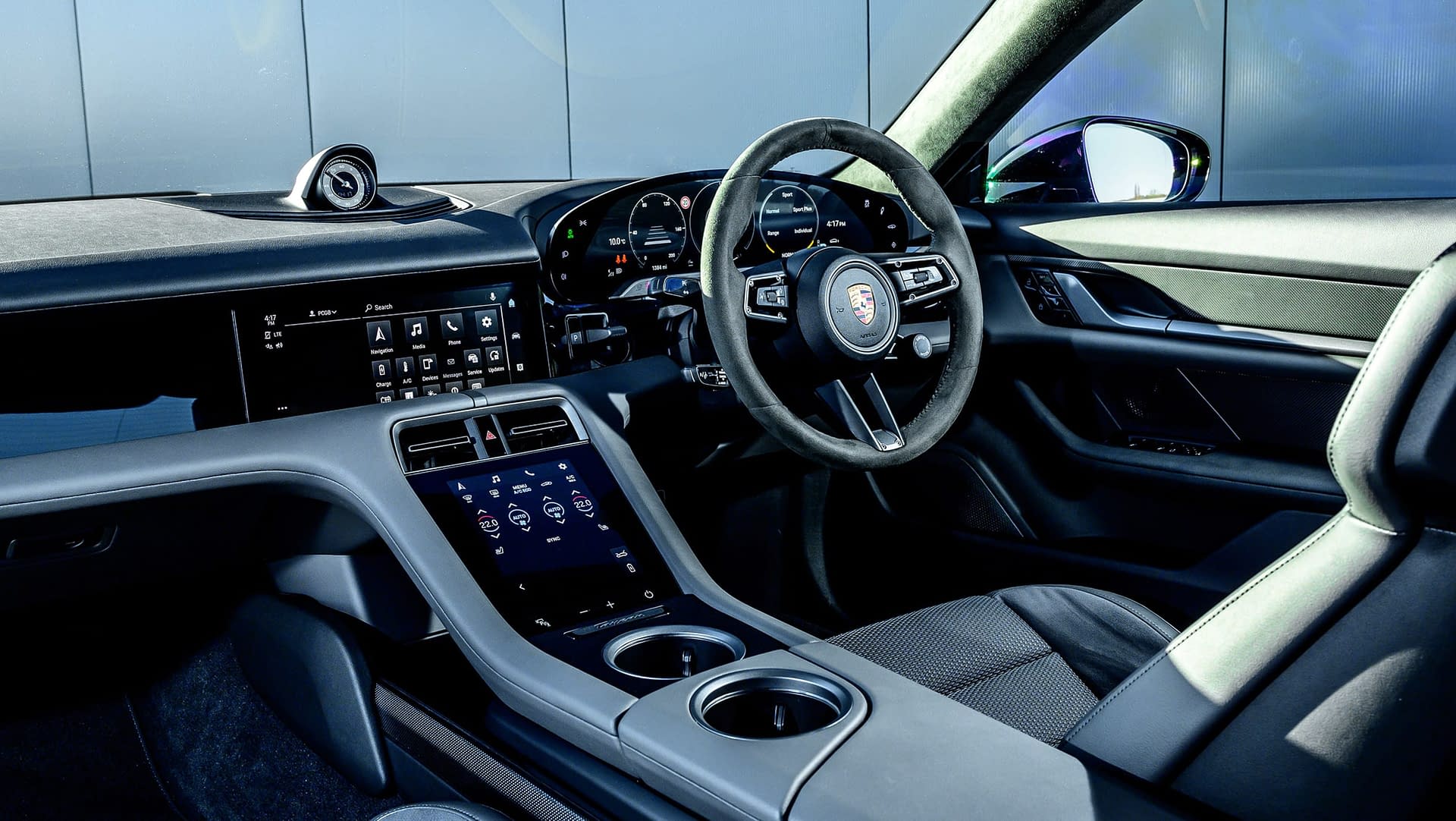 What is unforgivable is that Porsche charges for a public charging cable, which is as crazy as buying a 911 and then being charged for access to the hose on a petrol pump. You also have to pay for a 150kW on-board charger, otherwise the Taycan will only charge at 50kW at the majority of DC chargers. This option is an essential addition that Porsche should include if only to simplify matters, despite the fact that 800V charging stations will deliver up to 270kW charge whether you’ve added the on-board charger or not.

Similarly, the fact that you have to pay for Porsche’s semi-autonomous drive mode and adaptive cruise control is a bit rich given that you get this stuff as standard on most family cars these days. Note that spec and pricing for Australian models has yet to be finalised.

So yes, Porsche could do better with its standard kit, despite the LED lights, heated seats, leather interior, nav, Apple CarPlay, frameless dials and more that it does get as standard. Even so, given that you can seat the kids comfortably in the back, get a useful amount of stuff in the boot, and then enjoy properly thrilling handling and performance with running costs to embarrass a diesel hatchback, the appeal is clear. 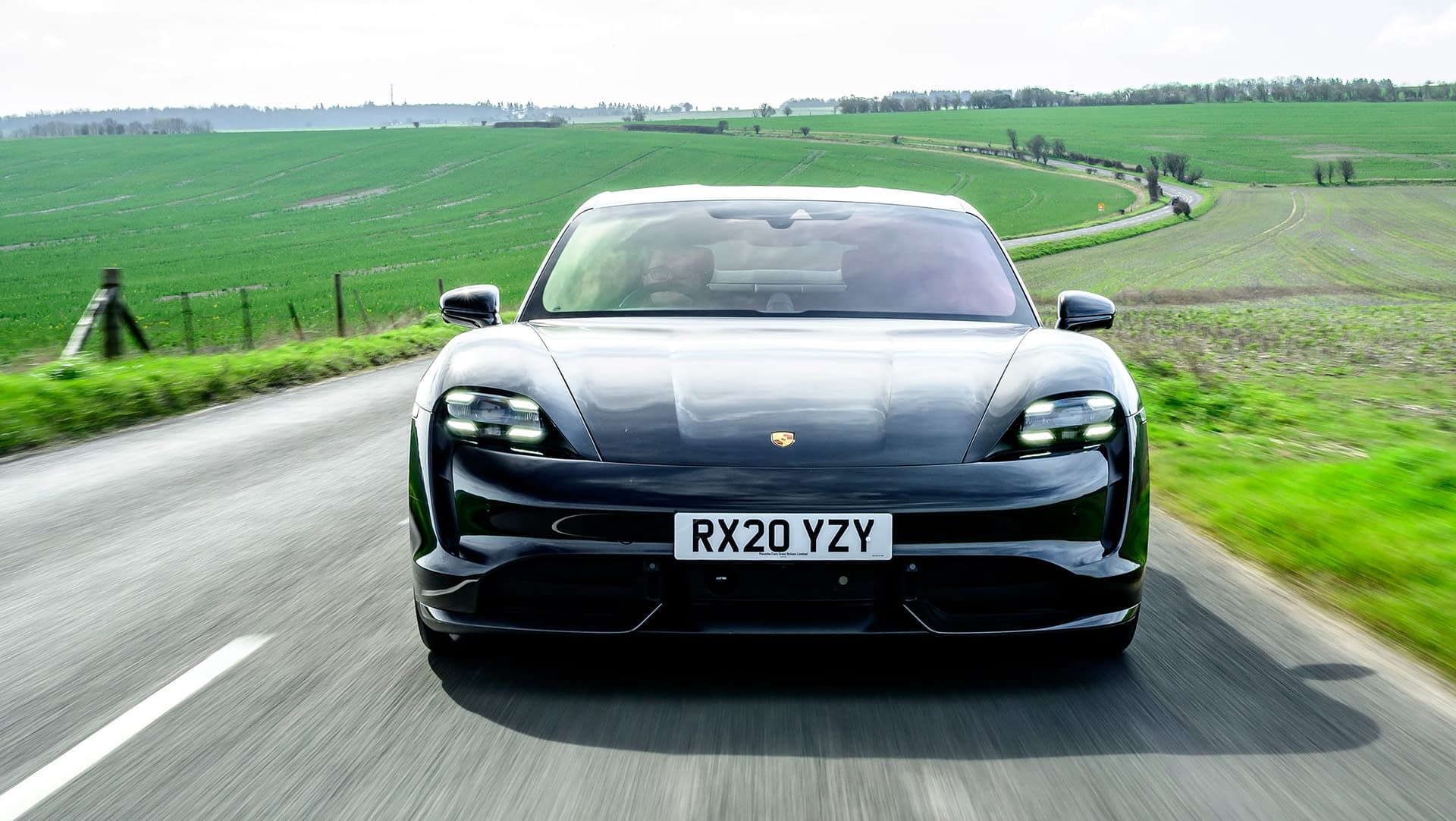 Just think carefully before you opt for the Turbo S. Yes, that launch control is savage, but you’re paying a lot for a very brief thrill.  We’d look to the 4S for the best value. You have to add more options, but we’ve driven it in the UK and know that it can handle just as well as the Turbo S.

Other than the existence of the better value and equally brilliant 4S, and Porsche’s niggling habit of asking silly money for silly things, the Taycan is an era-defining car; one of the best four-door sports coupés for decades – petrol, electric or otherwise.