Toyota was quick on the draw with hybrids, but the Japanese company has been relatively slow to introduce battery-electric models to its line-up. Now it’s getting serious with EVs, though, and it all starts with this car, the Toyota bZ4X.

Previewed here in concept form, this SUV will be the first of seven bZ EVs that will appear between now and 2025 as part of a 15-model all-electric push by Toyota. The car will sit on e-TNGA, the fully electric version of the company’s modular platform, and it has been developed in conjunction with Subaru, which is said to have had input into the car’s four-wheel drive system.

Toyota has declined to provide any dimensions for the bZ4X Concept, beyond labelling it a “medium-sized SUV”. But it says the ‘4’ in its badge stands for its size, and it appears similar in overall dimensions to the company’s own RAV4. The new arrival’s front and rear overhangs both look short, though, so the wheelbase may well be longer than the more conventionally powered model’s. Indeed, Toyota says the rear legroom in the bZ4X Concept is similar to that of the Lexus LS limousine. It’s fair to say that the car should be a rival for the likes of the Skoda Enyaq.

The exterior styling builds on the approach of recent hybrid Toyotas, with plenty of sharp creases and a cab-rearward design that gives the bZ4X more of a bonnet than it actually needs. The surfacing along the flanks is complex and made more so by variations of materials, with more glossy plastics at the wheelarch surrounds. 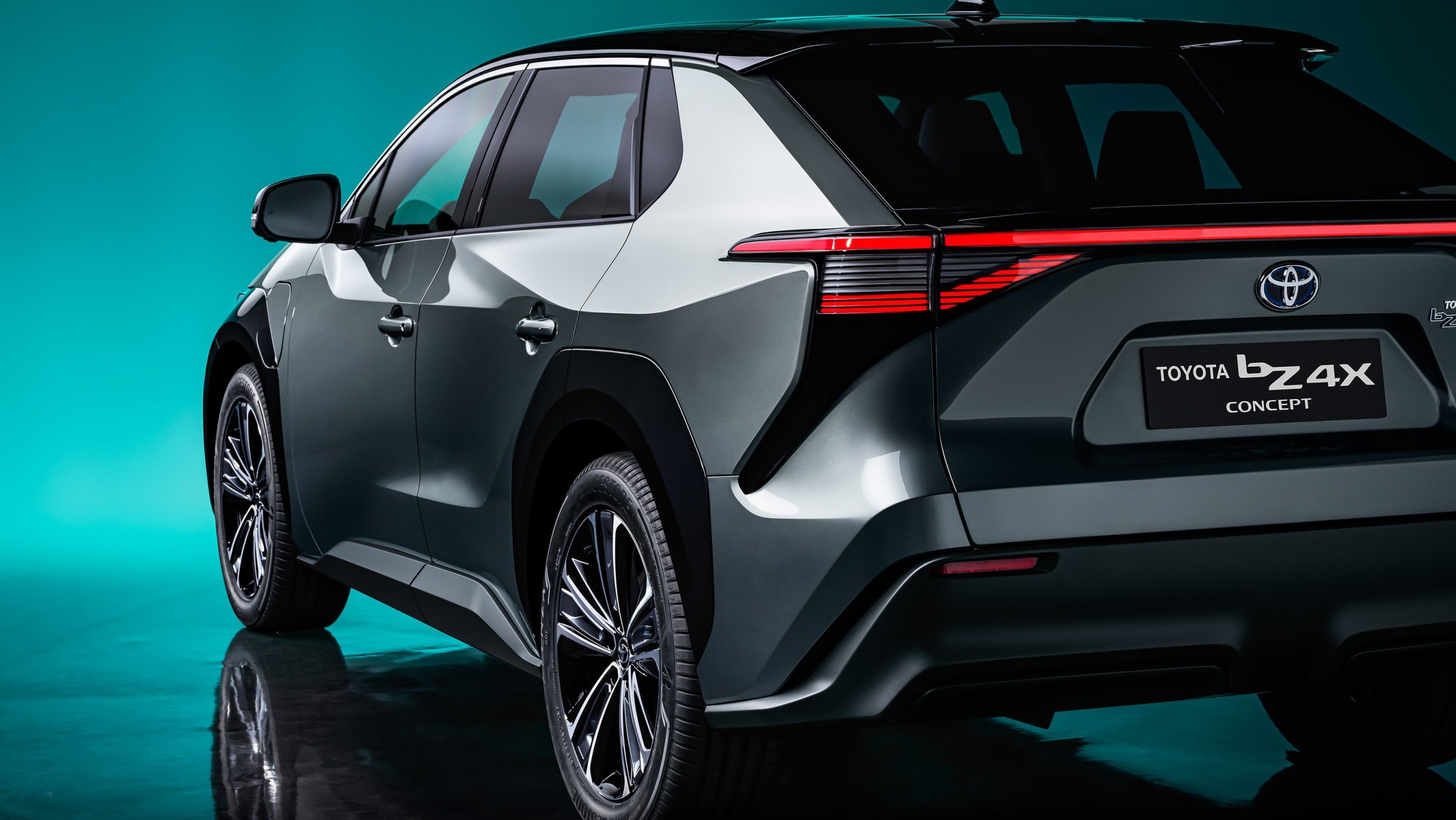 Toyota hasn’t released a clear top-down image of the car but the company says the bZ4X incorporates solar charging, and this is almost certain to be achieved through roof-mounted panels.

The front of the car does away with a conventional grille but still has a ‘mouth’ just beneath the leading edge of the bonnet, and ultra-slim daytime running lights that act as brows over quadruple-lens headlights. A light bar runs right across the rear of the bZX, and it’s framed by louvred-effect tail-lights. The cabin arguably marks a bigger departure from Toyota’s current designs, with a small instrument panel, a neatly integrated widescreen infotainment system and the use of fabric on the main fascia.

There’s also an unusual take on the steering wheel – a reflection of the fact that the bZ4X will be offered with steer-by-wire technology. Toyota says that the system’s calibration will mean the driver no longer needs to move their hands around the wheel while making a turn – and this has allowed a new design that lacks the top half of the traditional circle. The technology will be made available in China first, but Toyota says it plans to roll it out worldwide. The other components of the new model’s name are bZ – standing for Beyond Zero, Toyota’s vision of carbon-neutral motoring – and X, denoting a crossover body style. The company has already previewed a line-up of all-electric models, showing that there will be a more conventionally shaped hatchback and a larger people carrier-style vehicle alongside a number of SUVs.

As revealed by Automotive Daily last year, Toyota has trademarked bZ with a variety of numerical suffixes, and in many cases it has also registered the ‘X’ variant. Toyota says the bZ4X should arrive in showrooms by summermid-2022. It’s hard to put a figure on pricing until the company opens up on the car’s battery sizes, but we’d expect it to have a starting figure of around AUD$80,000-$85,000.