Toyota has unveiled the new Yaris Cross, a small SUV honed for world-wide appeal that will feature a hybrid powertrain and offer all-wheel drive.

The new Nissan Juke and Ford Puma rival, originally due to be revealed at this year’s cancelled Geneva motor show, is due to go on sale early next year.

It is built on the Japanese firm’s TNGA-B platform and shares a number of common parts with the similar-sized Yaris, alongside which it will be built at Toyota’s factory in Onnaing, France. The firm intends to sell 150,000 Yaris Cross models next year. It estimates the Yaris range, which includes the supermini, SUV and forthcoming GR Yaris hot hatch, will eventually account for a third of all its European sales.

Toyota said it chose to use the Yaris Cross title rather than give the model an entirely new nameplate to ensure a strong link with the supermini, its most popular European model. It also reflects the shared underpinnings of the two machines, although the firm says the two models are aimed at different customer groups. 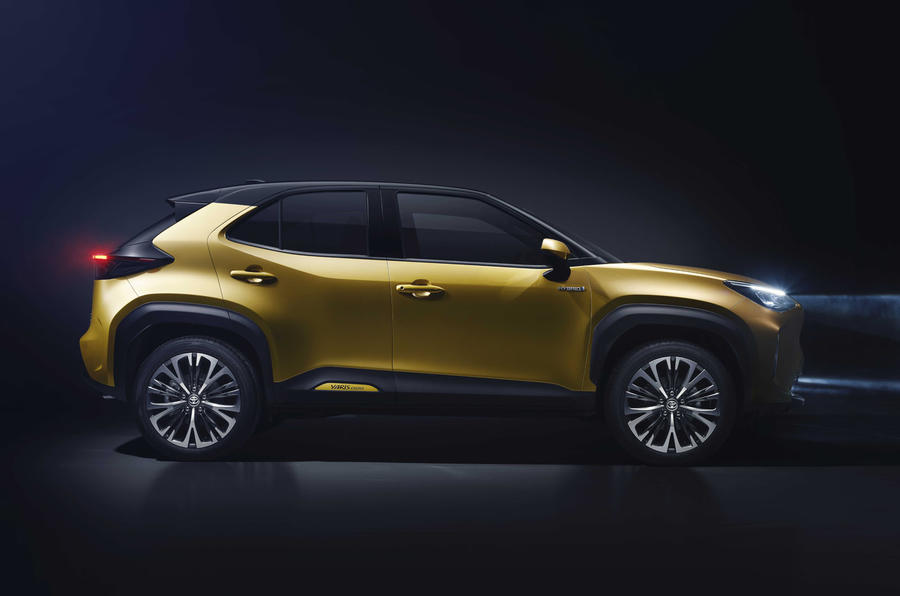 Toyota says the new Yaris Cross is intended to offer the “high-riding qualities of an SUV, but on a scale tailored to suit urban areas”. The styling was honed by Toyota’s design studios in Europe and Japan. Lance Scott, the firm’s Europe design boss, said the design was based on the key words “robust and minimalistic” because they “expressed both compactness and agility, as well as the robustness and strength of an SUV”.

Scott said the exterior has been sculpted to feature a diamond shape when viewed from the top, with a focus on ensuring a strong horizontal axis and enlarged, squared wheel arches to reflect its SUV credentials. He added: “We wanted to keep the DNA of Toyota’s SUV line-up but at the same time give Yaris Cross its own identity.”

The machine shares the same 2560mm wheelbase as the Yaris but has been extended by 240mm to a total length of 4180mm to offer greater interior space. The ground clearance is 30mm higher, and at 1765mm wide and 1560mm tall, it is 90mm higher and 20mm wider than the supermini. It sits on wheels up to 18in in size.

The Yaris Cross will be offered with the same 85kW 1.5-litre petrol-electric hybrid Atkinson-cycle powertrain as the Yaris. Toyota claims the powertrain, its fourth-generation hybrid system, will feature CO2 emissions of less than 120g/km on front-wheel-drive models and 135g/km for all-wheel-drive variants.

Toyota says it has tuned the hybrid powertrain with a focus on power delivery to make the Yaris Cross feel response to drive. The firm has yet to reveal fuel economy or full performance figures.

Intelligent all-wheel drive will be available as an option on the Yaris Cross. It is operated through an electric rather than mechanical system and operates in front-wheel drive most of the time, sending extra torque to the rear axle when needed, although it features the same power and torque as the front-drive version.

Toyota says the relatively unusual decision to offer all-wheel drive on a compact crossover was to both highlight its SUV credentials and to emphasise the versatility of the Yaris Cross, allowing owners to use it in primarily urban areas during the week and longer journeys at the weekend. It also hopes the system might attract owners of larger SUVs looking to downsize without compromising on performance.

The car offers a range of driver assistance systems as part of the Toyota Safety Sense, including automatic braking and steering intervention.

Toyota has revealed few specific details about the car’s interior, although official images show it is closely aligned with the Yaris supermini’s. That includes a centrally mounted touchscreen featuring the latest version of the firm’s infotainment system, which offers Apple CarPlay and Android Auto.

The Yaris Cross will sit below the C-HR in its crossover range.

Although Toyota says the Yaris Cross was originally designed with European customers in mind, it will be offered in other markets, including Japan and Australia. It will carry the same branding in all markets, the first time that the Yaris nameplate will be used in Japan, where the supermini is branded as the Vitz.