We hop into the passenger seat of VW’s new 2020 MK8 Golf GTI before its launch.

For this story, we first have to look into the past. Not to 1976, when the first Volkswagen Golf GTI was presented – that tale has been told countless times. Our story is more recent.

In the mid-nineties, Karsten Schebsdat developed the chassis for the first Ford Focus. Trialling the car on the Blue Oval’s test track in Lommel, Belgium, he struck such a good compromise between sporty driving behaviour and comfort that he still proudly says the Focus was the reason why the Golf Mk5 got a multi-link rear axle.

Several professional positions later (including 997 GT2 technical project manager at Porsche), Schebsdat is now part of the vast VW engineering team, as head of Driving Dynamics, Steering and Control Systems. His title is long but his job is to the point – to ensure new models drive faster and handle better than the competition, and beat all-comers.

This knowledge is quite helpful now we’re in the passenger seat of the new Golf GTI, with Schebsdat at the wheel. Our first real access to the latest hot hatch comes at the Ehra-Lessien test track, which sounds rather exotic for a small village in the Heide, near Wolfsburg. This is where the finishing touches are applied to all VW Group cars before they are released into showrooms around the world. Within minutes of arrival a Bugatti thunders past us, followed by the Skodas, Cupras and Audis of tomorrow. 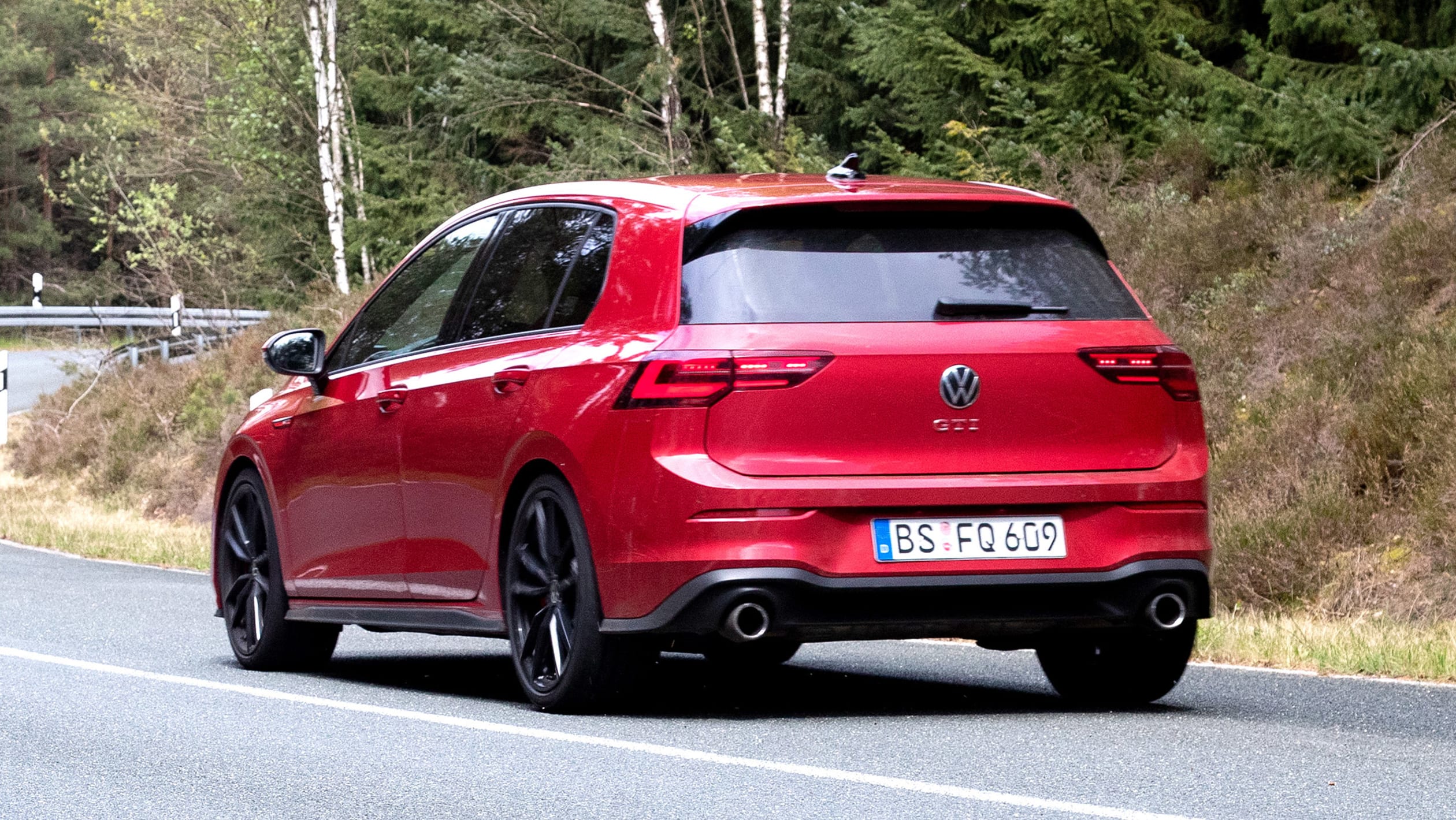 At precisely 1.30pm, the test facility becomes ours exclusively. Schebsdat starts the GTI and pins the throttle as we head straight on to the high-speed oval. We hit 160km/h with little fuss, then 200km/h, 215km/h, 225km/h. The new GTI effortlessly accelerates to its maximum speed of 249km/h, and comfortably sits there without so much as breaking a sweat. Then, with no warning, driving dynamicist Schebsdat cuts from the far right of the four-lane high-speed strip to the far left. At 249km/h. And the GTI? It’s unfazed. No swaying, no rocking, nothing. It remains planted.

For the next exercise, it may help you to know that Schebsdat is married and has two children; his is a happy home life he will be wanting to return to at the end of a working day. Despite this, he attempts to unbalance the GTI by deliberately provoking it at 225km/h. But as before, the GTI doesn’t react to such aggressive inputs. “We wanted to build a predictable car, one that never surprised the driver – except with what it can do,” he says. On this evidence, it seems he has succeeded.

We head out of the facility and on to Route 9. This is a challenging country road, with turns that tighten mid-corner, blind crests and plenty of bumps – but the GTI remains composed and quiet. You notice how uneven the surface is only from the slight creaking in our prototype’s dashboard.

Even from the passenger seat, understeer seems to be all but eliminated through the tightest of bends. This was a key objective, Schebsdat tells us. It has been achieved partly through the car’s new electronics platform, which enables faster and better communication between all of its systems.

In the previous GTI, all set-ups that had an effect on longitudinal and lateral dynamics worked independently. So the wheel-pressure sensors, ESP, electronic diff lock and adaptive dampers all went about their business on their own, working from independent control units. Today, all the sensors report directly to a central processor that works at lightning speed. In turn, this speeds up the car’s ‘electronic’ decisions.

Schebsdat continues to sweep from corner to corner, with aggressive steering and throttle inputs. It’s surprising how robust the new GTI sounds, yet it stays planted and unruffled. Although we can’t yet drive the car ourselves, Schebsdat says the steering feedback and response have been improved, thanks to the new electromechanical progressive set-up.

And so to the numbers. Some will be a little disappointed that the GTI boasts ‘only’ 180kW – a small improvement over the outgoing car. That’s still some way behind its key rivals, yet VW’s dynamicist claims more than 224kW cannot be effectively done with front-wheel drive and normal road tyres. But VW will get close; a 220kW version of the GTI, badged TCR, is slated to arrive this year.

There’s yet more to come, too, says Schebsdat, because the GTI Clubsport will also return. Is it a coincidence that Ford has just axed the next Focus RS? Perhaps. It seems Schebsdat is now on the right team.

Of course, a final verdict on the GTI has to wait until we drive it ourselves. But being in the passenger seat while the GTI is put through such extreme tests gives us a revealing insight into how sophisticated the elder hot hatch has become. Fast, composed and controlled, it’s still every bit a GTI.