The Volkswagen ID.Buzz looks to reignite the spirit of the iconic, multipurpose Type 2 campervan of the 1950s, and our spies have caught a glimpse of the electric newcomer testing in Sweden, near the Arctic Circle.

The car is wearing a deceptive disguise so few specific styling details can be drawn from this development model, but the overall design ethos is clear. The production version of the ID. Buzz will draw heavily from the retro-inspired design first seen with the 2017 ID. Buzz concept. The deep, swept-back windscreen and smooth surfacing are mostly unchanged from the show car, with classic two-tone paint finishes likely to feature in tribute to the Type 2.

The camouflage of this testing mule conceals what we expect to be a set of slim-line headlights, joined by an LED running light strip and flanking a large Volkswagen logo. The design is largely free of clutter, with a simple lower grille and fog light arrangement integrated into the bumper. The ID. Buzz has a boxy profile, but a gently raked rear window distinguishes it from a traditional van. The rear light clusters of this development model are also covered over, but the production version is likely to adopt a set of narrow, angular tail lights to match VW’s current lineup. A subtle roof spoiler and an oversized Volkswagen tailgate badge will also feature. At launch, the ID. Buzz will be available as a passenger carrying model or a commercial van variant, called the Cargo. It’s the Cargo model captured here, as indicated by the lack of side windows – the Cargo ditches the second and third-row seats in favour of load space. Early in September 2021, Volkswagen unveiled an autonomous ID.Buzz prototype at the Munich Motor Show, and revealed that it will soon enter service in Germany as part of the firm’s new ride-hailing business.

The self-driving electric van will run its first fare in 2025 under Volkswagen’s recently formed, Uber-rivalling mobility company, MOIA. Unlike its main rival, though, MOIA pools multiple fares into the same vehicle in an effort to use the road network more efficiently and ease inner-city congestion – hence the choice of the three-row ID.Buzz. 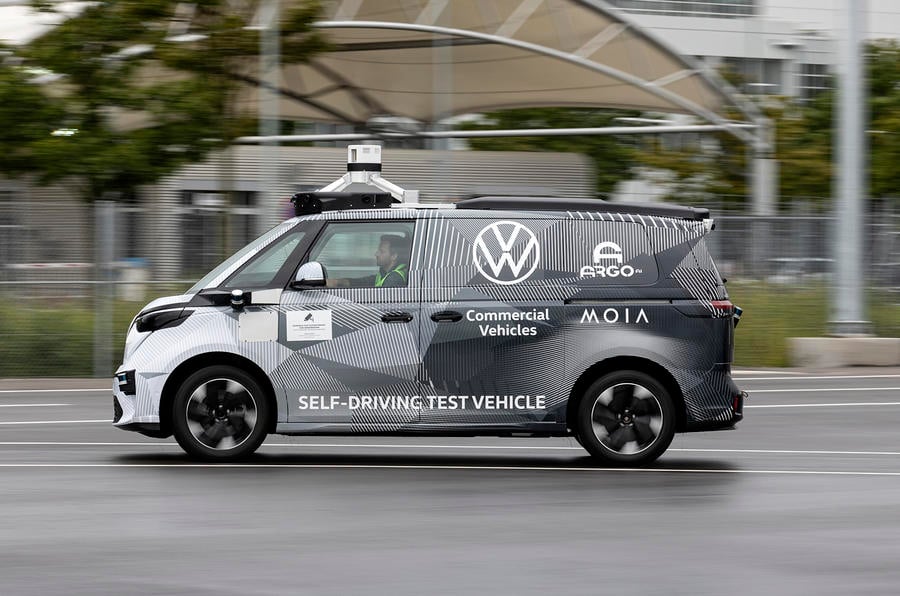 To make the ID.Buzz autonomous, Volkswagen called on the American technology company Argo AI. The firm started by fitting the EV with an arsenal of cameras, radar sensors and lidar sensors, which can detect objects from a distance of more than 400 metres.

The hardware is backed up by some sophisticated software which Volkswagen says can predict the actions of pedestrians, cyclists and other vehicles. The brand also says the system will react naturally to any hazards, controlling the steering, throttle and brakes smoothly “like an experienced driver.” The complexity of the self-driving system means that Volkswagen will only release the autonomous ID.Buzz in Hamburg to start, so it can control as many variables of the EV’s development as possible. However, the technology will be rolled out across more cities as the software improves.

Despite the challenge, Christain Senger, head of autonomous driving at Volkswagen Commercial Vehicles, is confident in the system’s capability. He said: “An environment recognition system from six lidar, 11 radar and 14 cameras, distributed over the entire vehicle, can capture much more than any human driver can from his seat.” Volkswagen and Argo AI are currently developing the autonomous ID.Buzz at a nine-hectare facility near Munich airport. The site has been designed to simulate a range of traffic situations specific to European driving conditions.

Like the rest of Volkswagen’s ID-badged electric vehicles, the ID.Buzz is based on the MEB platform. Buyers will have a choice of either panel van or three-row passenger van variants, both of which will be available with batteries ranging in size from 48kWh to 111kWh. The larger unit will offer a maximum range of around 550 kilometres.

The van’s electric motors will be borrowed from the ID.3 hatchback and ID.4 SUV, with a 150kW single-motor, rear-wheel-drive option sitting at the lower end of the line-up. However, a four wheel-drive, dual-motor model is also expected, producing a punchy 220kW.

Volkswagen’s latest announcement also offers a closer look at the ID.Buzz’s styling, as most of the cladding has now been removed. The company’s muse for the van’s design language was the iconic Type 2 Microbus of the 1950s, and the EV adopts the same upright windscreen and rounded panels. There are a couple of lumps in the roof, though, to house the various sensors and cameras.

Speaking at the 2017 Geneva Motor Show, Volkswagen’s then-design boss Oliver Stefani told Automotive Daily: “We would like to bring [the Microbus] back because it fits so well to what the brand stands for: it’s emotional, it has functionality, it makes your life easier.

“With the MEB platform this is the chance now to get the proportions back,” he added, referring to the fact that you don’t need to have an engine in the front with an EV. “But you can also get much more interior space, almost one class higher.”

Volkswagen describes the ID. Buzz as a vehicle which “transfers a Microbus feeling into the future.” It draws inspiration from the Type 2 van, but the space-age interior, enormous 22-inch alloy wheels and wraparound LED headlamps pulls the design into the 21st Century.

Its styling certainly fits with the rest of Volkswagen’s ID. range – and, like its siblings, it’ll be based on the firm’s dedicated MEB electric underpinnings. The chassis will be stretched out to van-sized proportions, giving a 3.3-metre long wheelbase and short overhangs. The wheel-at-each-corner design gives the ID. Buzz space for a flexible eight-seat cabin, with multi-adjustable rear chairs and a driver’s seat that swivels 180 degrees. The latter action happens automatically when the autonomous ID. Pilot mode is selected, retracting the single-piece capacitive touch steering wheel while the car takes full control of the driving.

Other tech includes an augmented reality head-up display and a removable portrait tablet that controls the car’s functions.

Just as in the concept, the batteries will act as a structural member in the floor of the production version, lowering the vehicle’s centre of gravity. Rear air suspension and adaptive dampers aim to deliver high levels of comfort, while a 10-metre turning circle is promised, thanks to rear-wheel steering.