Porsche has confirmed that it will reveal a hardcore new GT4 RS version of the 718 Cayman coupe at the LA motor show next week, flanked by a pair of new Taycan variants.

The hottest Cayman has been described by its maker as “perfectly irrational”, promising quicker laptimes over the existing GT4 courtesy of its lower kerb weight, added power and increased downforce. 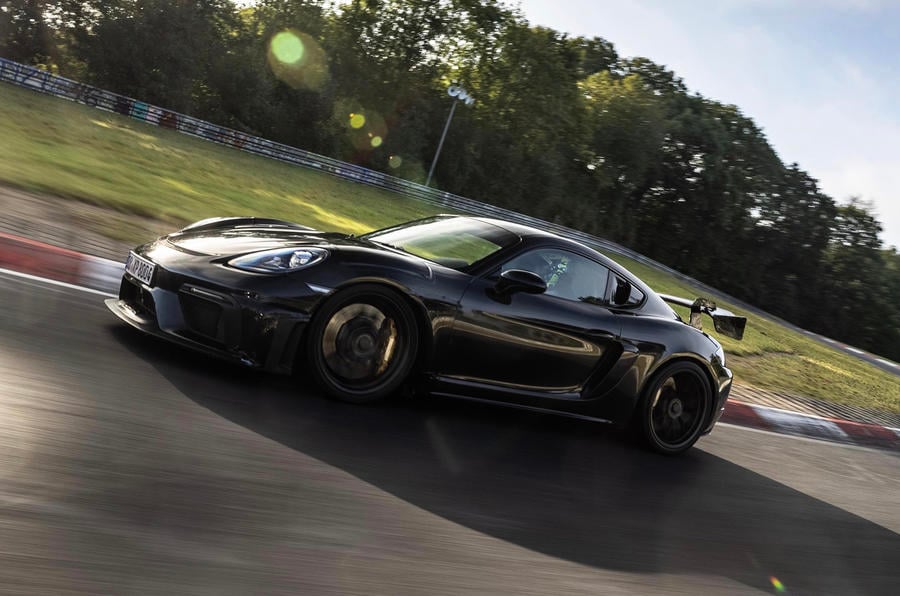 Porsche has all but confirmed, meanwhile, that one of the new Taycan variants will be the long-awaited GTS. It will be positioned between the 4S and Turbo variants – a gap that is filled in the Panamera and Taycan line-ups by the lower, stiffer and black-themed GTS models. Expect a similar treatment for the Taycan.

Details of the third bodystyle variant are less concrete, but we reported earlier this year that Porsche was considering a lower-slung, less off-road-oriented version of the Taycan Cross Turismo. Removing the 4×4-inspired body cladding and bringing the suspension back down to the saloon’s height would provide the manufacturer with a true electric alternative to the Panamera wagon.

Several development mules of the more focused version of the latest 718 Cayman GT4 have already been spied testing on the Nürburgring. A late-stage test run saw a prototype lap the 20.7km Nordschleife in 7min 9.300sec. On the shorter, 20.6km version of the circuit that Porsche has previously used for development, the model achieved a claimed 7min 4.511sec lap, which, the firm says, is 23.6sec faster than the regular 718 Cayman GT4.

The laps were completed by test driver Jorg Bergmeister, and the car was fitted with a full racing seat and optional Michelin Pilot Sport Cup 2 R tyres.

Andreas Preuninger, Porsche’s GT model line boss, promised that new model has “everything that characterises a genuine RS: lightweight construction, more downforce, more power and, of course, an even higher level of responsiveness and feedback to driver inputs.”

Porsche has revealed no technical details of the machine, although both the new official images and previous spy shots showcase a number of bodywork additions for the RS. At the front, there are versions of the Naca bonnet air ducts similar to those on the 911 GT2 RS, while the rear quarter windows have been replaced by slatted cooling vents. Blanking plates at the front suggest the hardcore Cayman will gain similar wing-mounted air outlets to its 911 GT3 RS sibling.