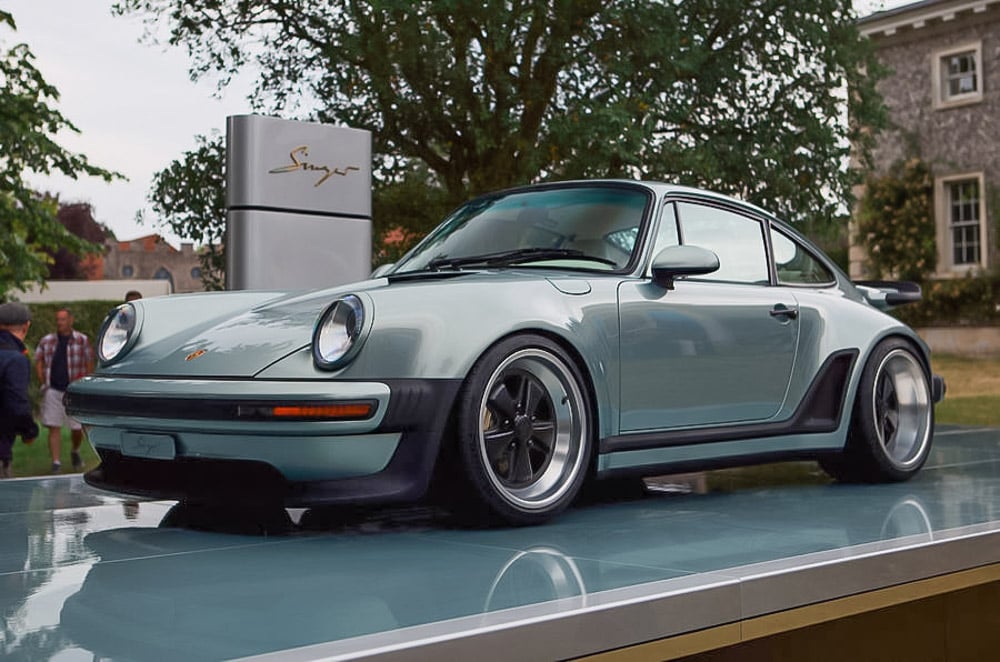 Singer Vehicle Design’s latest restomod, inspired by the Porsche 911 Turbo, has made its debut at the Goodwood Festival of Speed.

The Porsche 911 Reimagined by Singer Turbo Study is the fourth car to be revealed by the California-based firm. Built on the chassis of a 964-generation Porsche 911, the Turbo Study will act as a template for future customer cars. Its bespoke carbonfibre bodywork, finished in Wolf Blue, has been designed to hark back to the look of the famed Porsche 930 that was produced from 1975 to 1989. A number of subtle changes have been made, however.

The front bumper is more pronounced, with foglights built into the housing rather than being attached to the grille, while the mirrors have been reprofiled to give a sleeker look. At the side, the stone guards have been replaced with large air intakes to feed the bespoke air-to-water intercoolers, and an all-new lightbar can be seen at the rear. The design also mimics the 930’s signature ‘whale-tail’ spoiler and wide arches. Inside, the interior has been designed with a focus on luxury and usability. Finished in Malibu Sand with Black Forest wood inserts on the dashboard, door cards and centre console, the layout remains similar to that of the 930.

A large speaker system, new pedals and a redesigned steering wheel can be seen, while a phone slot in the centre console features inductive charging. Under the bonnet is an all-new engine, based on the Mezger flat six found in the Porsche 964. The twin-turbocharged 3.8-litre unit produces 335kW (although Singer will upgrade it to provide more power if a customer requests it) and makes this Singer’s first turbocharged road car.

Customers have the option of either rear or four-wheel-drive, although both will be connected to a six-speed manual gearbox. Carbon-ceramic brakes, hidden behind the Fuchs-style alloy wheels, provide stopping power, while a sports exhaust system is available as an option. Unlike some previous Singers, such as the off-road ACS and the track-focused DLS, the Turbo Study focuses on usability. The electronically adjustable heated seats are designed for long-distance driving, while cruise control and air conditioning feature.

The suspension is also “optimised for touring”, athough Singer has said that it will tailor more suitable damping characteristics “if a more overtly sporting focus is preferred”. Singer has yet to say how many Turbo cars will be built or how much they will cost, but we expect it to be more common and cheaper than the limited-to-75 DLS.

inger claims that more than 70 customers have reserved a Turbo car so far.