Skoda is planning a range of Enyaq iV electric models over the next few years as it looks to capitalise on the growing demand for EVs.

The Enyaq, revealed last month, is Skoda’s first bespoke EV and is based on the Volkswagen Group’s MEB electric modular platform.

A Kodiaq-sized large SUV, it will from launch offer two rear-wheel-drive models with 390 and 510 kilometres of range, plus two four-wheel-drive variants, one of which is badged vRS. Now Skoda’s European sales and marketing boss, Alain Favey, has told Automotive Daily’s exclusive partner Autocar that more variants are due. He said: “We think the Enyaq is the perfect right step, and there will be a range of Enyaqs that will be expanded over the years.”

Given the flexibility of the MEB platform, the cost-effectiveness of different bodystyles is easier to justify across all Volkswagen Group brands than for traditional cars. The upcoming Volkswagen ID 4 will receive both regular SUV and coupé versions, and spy shots of a prototype have shown that Skoda will follow the same route with the Enyaq.

While it appears identical to the regular Enyaq from the front, things change from the B-pillar backwards, with a reduced glasshouse, a rising shoulder line and a roofline curving into a steeply raked rear screen and short, saloon-style tailgate. 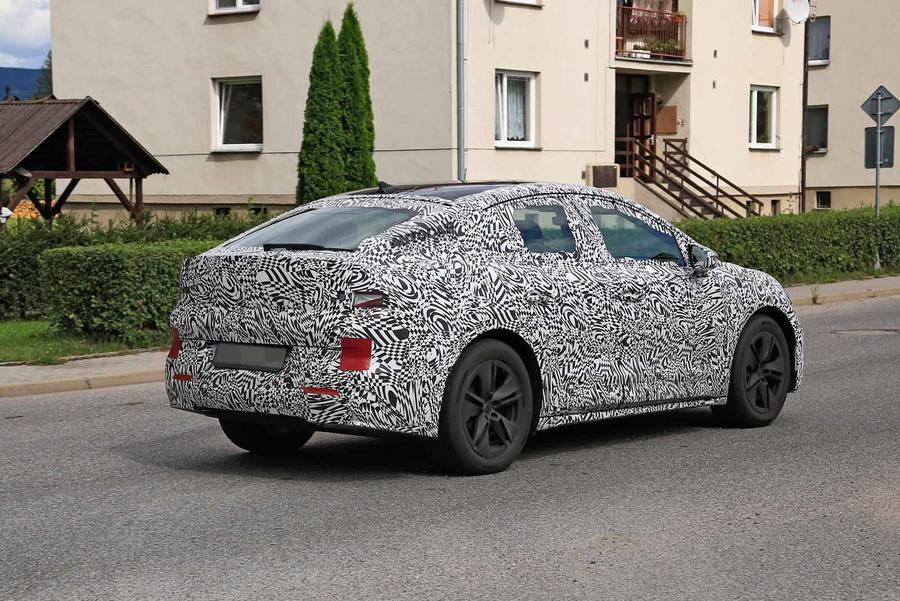 The Enyaq coupé, whose production name hasn’t been confirmed, will use the same underpinnings as the regular Enyaq. That should mean a range of rear and four-wheel drive powertrains, kicking off with a rear-driven 132kW model with a 62kWh battery and rising to the vRS with 225kW, four-wheel drive and an 82kWh battery.

It remains to be seen if the redesigned rear end has a positive impact on range; sister brand Audi’s E-tron Sportback achieves an extra 10 kilometres over the regular E-tron, thanks to a lower drag coefficient. It’s likely the Enyaq’s altered roofline will have a similar effect. Every Enyaq can be charged at a rate of up to 50kW as standard, with 100kW charging optionally available for the 62kWh battery and 125kW charging offered at extra cost on the 82kWh model.

Don’t expect a radically altered interior, either, with the same digital instruments and infotainment display as the standard car. Whether or not the roofline will impact rear seat space remains to be seen, but it will almost certainly reduce the 585-litre boot capacity of the standard Enyaq.

As is customary with coupé-styled models, a small price increase is likely over the base price of the standard SUV. Expect the coupé to cost approximately AUD$2,000 more.

Skoda may also consider models tailored for specific countries, such as China, which is by far its biggest market.

Beyond the intention to grow the Enyaq line-up, Favey said Skoda has no solid plans for its next EV – but that the use of the MEB platform means it will be able to develop new electric cars quicker than traditional combustion-engined models.

Favey added: “It depends how quickly the EV market grows. The planning [for EVs] is less rigid than we might have in other segments – for example, [the replacement cycle for] the Octavia. We don’t know what demand will be in the EV market, but we think we’ve done our homework.”

He said that the advent of EVs to the Skoda range should allow the brand to grow its market share in western European markets in which its performance is weaker. Skoda’s biggest markets after China are Germany, the Czech Republic, Russia and Poland.

“I see EVs as big potential – and not in our typical markets,” said Favey. “In Norway, we have 6% market share, which is more than our European average in a country where everybody is buying an EV and we didn’t have one. Skoda in Norway is extremely excited to get the Enyaq. It gives us a lot of chance to conquer new markets.”

New Skoda Fabia's move to MQB will bring improvements all round – but no electrification yet. Skoda will finally bring its ever-popular Fabia supermini back...
Read more

Our first drive review of the new Skoda Kamiq, in sporty Monte Carlo trim with the most powerful engine available.
Read more