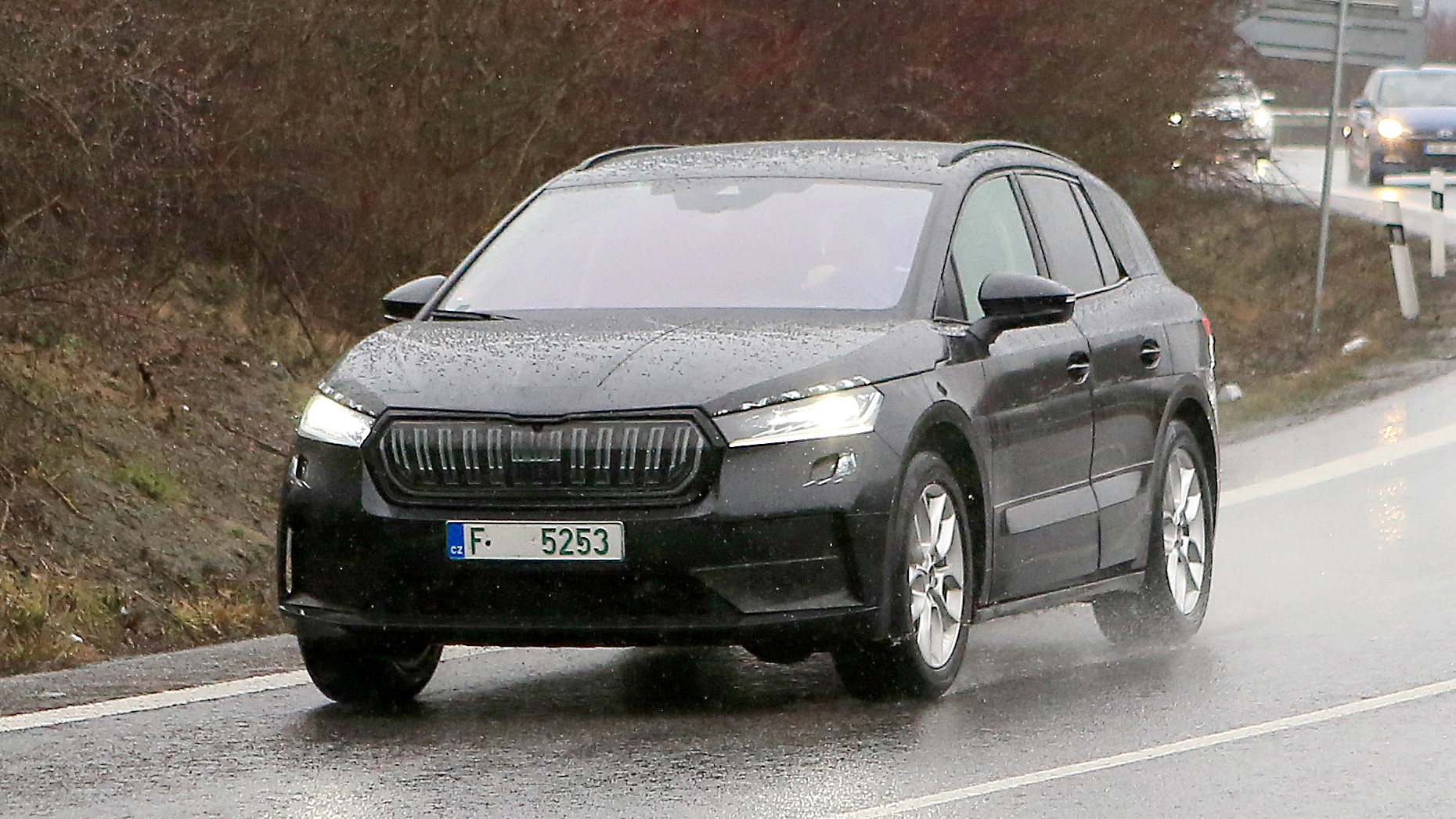 The upcoming Skoda Enyaq electric SUV has been caught ahead of unveil by our spy photographers.

When it arrives, it will be the Czech brand’s first purpose-built electric vehicle, sharing the same MEB underpinnings as the Volkswagen ID.3 and Cupra el-Born electric hatchbacks.

These images reveal that the electric SUV will adopt the same coupe-like sloping roofline which was previewed by the Vision iV concept. Skoda’s engineers have fitted some fake body panels to the rear of this mule, in an effort to mask the Enyaq’s overall profile and shape – but it’s clear the SUV’s styling will carry through many features of the concept to production. The rest of the Enyaq’s styling falls in-line with Skoda’s existing range of combustion- engined vehicles. It shares the same shape grille, headlight design and bumpers as the Karoq – along with an entirely conventional set of Skoda alloy wheels and familiar panel mouldings for the bonnet.

A recent interior shot hints that the Enyaq will be available with a huge central touchscreen and a smaller digital instrument binnacle. The technology looks identical to the infotainment setup found in the Volkswagen ID.3, but the Skoda’s dashboard is new. There’s no official word yet on the Enyaq’s powertrain and battery line-up but, as it’s based on the MEB platform like the Volkswagen ID.4 SUV, we expect it will use the same range of battery options and electric motors.

Like the ID.4, the standard Enyaq should feature 150kW electric motor mounted on the rear axle and an 82kWh underfloor battery pack, which should provide the same 160km/h top speed and 500-kilometre cruising range. The range-topping model will likely be fitted with an electric motor on each axle, providing four-wheel-drive and an output of upwards of 224kW.

The Enyaq establishes a new naming convention within the Skoda range where electric models will take names starting with ‘E’. In addition to this, the new car name also ties-in with Skoda’s existing SUV model line of Kamiq, Karoq and Kodiaq by ending with a “Q.” As the first Skoda model to be based on the MEB platform, the Skoda Enyaq will be a landmark car for the brand. It’s the next step in a Skoda plan to offer 10 electrified models (plug-in hybrid and fully electric) under the iV sub brand by the end of 2022, but it also uses tech that we’ll see in wide use across the VW Group in the coming years.

Skoda estimates that electric and plug-in hybrid vehicles will make up 25 per cent of its sales by 2025 and hopes will be high for the Enyaq to realise a significant chunk of that total by slotting into the ever-popular SUV class. To that end, it says it will have invested 2 billion euros in electric car development and connected systems by the time 2025 comes around.

New Skoda Fabia's move to MQB will bring improvements all round – but no electrification yet. Skoda will finally bring its ever-popular Fabia supermini back...
Read more