Tesla boss Elon Musk says the firm is working on a new generation of electric vehicle (EV) battery that will provide five times more energy and cost half as much as existing technology – but added that it’s at least three years away from production.

Musk said the new battery system, which uses larger cylindrical cells and will be produced in-house by Tesla, will enable the firm to launch an “affordable” $25,000 (approx. AUD$35,500) electric car, although he added “serious high-volume production” of that machine won’t be possible until 2022.

Developing such a car, which Musk promised would be able to “drive itself”, has been a long-held ambition for the American firm. 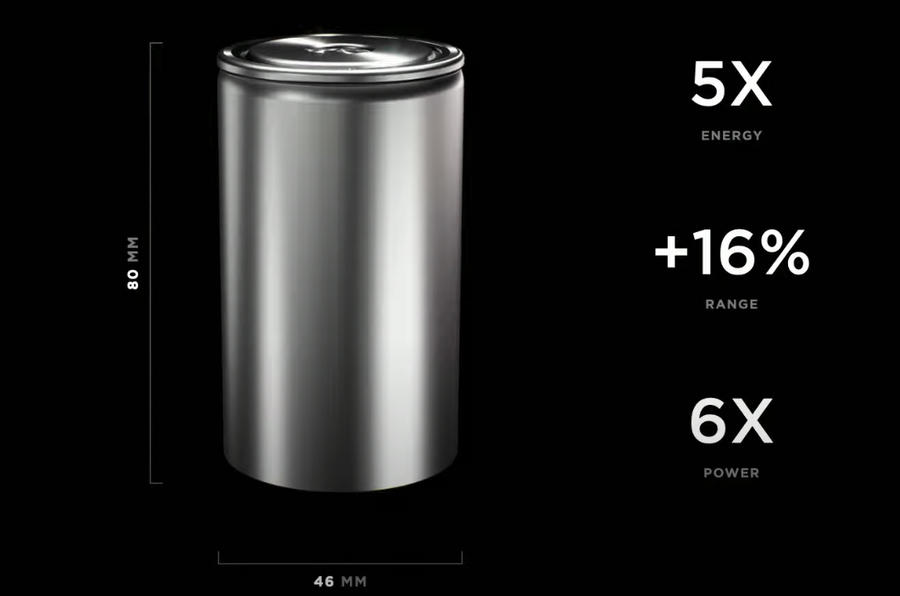 Musk made the announcement at a much-hyped Battery Day event, during which Tesla also revealed the specs of the range-topping Model S Plaid.

“We need to make more affordable cars,” said Musk. “One of the things that troubles me the most is that we don’t have a truly affordable car, and that’s something we will have in the future. For that, we need cheaper batteries.”

Tesla has been aiming to develop a battery that costs $100 (AUD$140) per kWh, down from around AUD$209-$272/kWh at the moment. The firm is now developing technology using continuous cylindrical cells, as opposed to the ‘tabs’ of today. The spiral design of the new batteries makes them cheaper to produce and, Tesla says, enables them to offer five times the energy, 16% more range and six times the power of the current battery pack used in the Model 3 and Model Y.

While Tesla currently buys batteries from suppliers including Panasonic, CATL and LG Chem, it’s aiming to start producing the new batteries in-house, which would also greatly reduce the cost. It will continue to buy batteries from outside firms to meet its demand, though.

Tesla also said that it’s developing systems to recycle battery cells, developing its own “inexpensive” silicons and aiming to slash the use of cobalt in its batteries, which will also further reduce costs.

It intends to start pilot production of the new battery at its factory in Fremont, California, but Musk said it would take at least a year to reach full production capacity.

By producing its own batteries, Tesla says it will be able to integrate the packs more fully into the structure of future cars and pack them in more densely. It said that will reduce the car’s mass by 10% and boost range by 14%, which will be key in achieving the cost savings needed to produce what Musk said will be a “compelling” affordable EV.

The announcement disappointed some investors, due to pre-event suggestions that Tesla was going to unveil a ‘million-mile’ battery, prompting the firm’s share price to fall 5.6% by the close of trading in the US on Tuesday.

It continued to fall in after-hours trading, dropping Tesla’s market cap by around $50 billion (AUD$71.33 billion).

The upcoming, all-electric Tesla Roadster will go up against the Lotus Evija with a targeted 0–100km/h time of around two seconds
Read more
Facebook