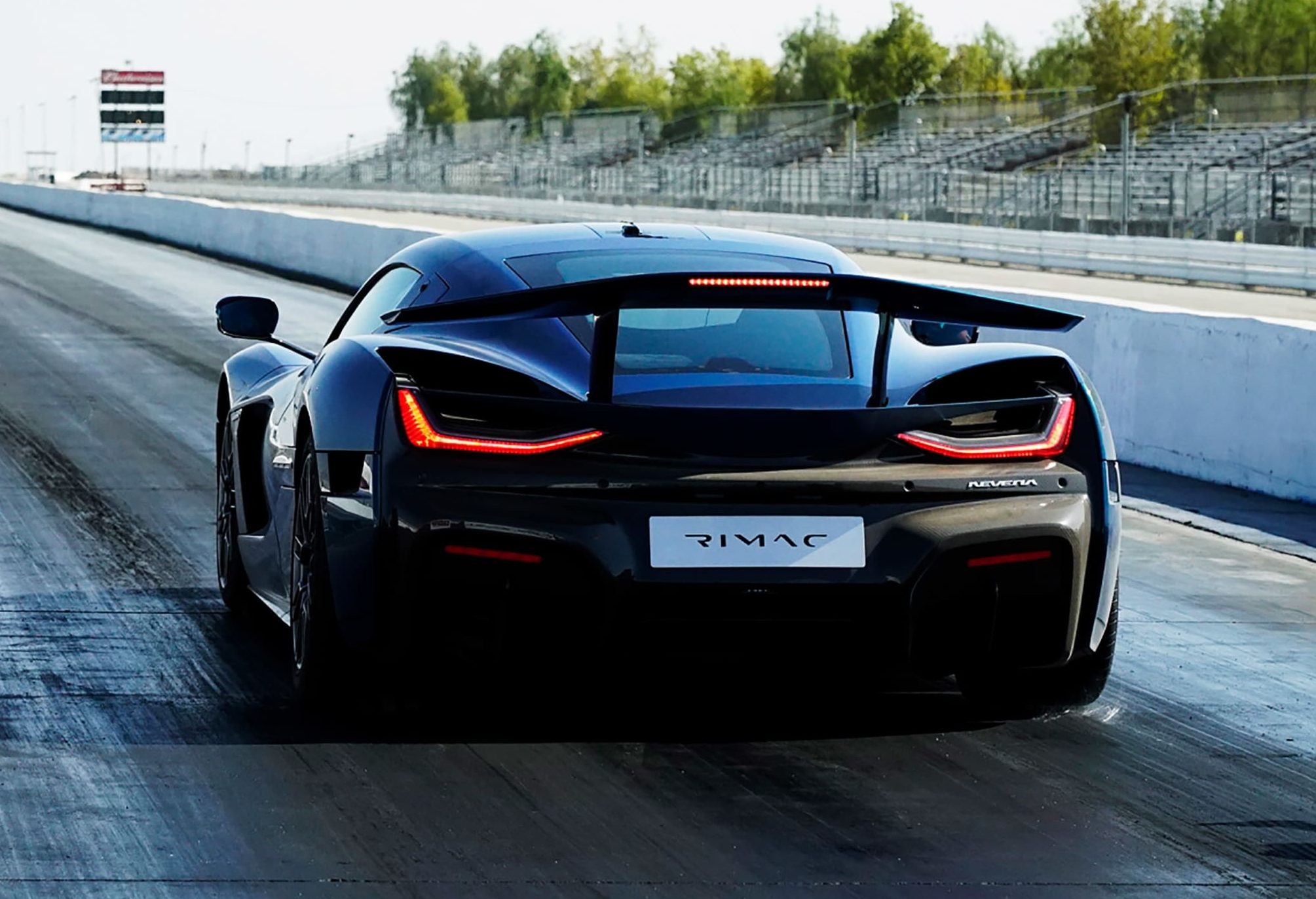 If there is an electric hypercar to sit up and take notice of, it’s this one. The Rimac Nevera is here, and here first

Over the last few years the reveal of a ‘groundbreaking’ 1500kW electric hypercar has become a painfully common affair, creating a wash of new-age supercars such as the Lotus Evija, Pininfarina Battista and all manner of small, artisan start-ups, all with similar ambitions and vying for maximum attention. But there’s always been one outlier to the general rule of cynicism: Rimac.

It was the Croatian company that arguably introduced us to the notion of an electric supercar, and while the business has still to really achieve its lofty ambitions, the Nevera marks an important moment in Rimac’s journey. That’s because the Nevera is finally ready to go, its 150-unit run is already in production, and examples are due to reach early adopting customers in the third quarter of this year. In the build up to cars reaching customers, Rimac has taken to the drag strip to give us our first real glimpse of the Nevera’s huge performance. Unofficially, the Nevera already achieved record-breaking quarter-mile runs in June, but with official timing equipment fitted at California’s Famoso Raceway, the Nevera has recorded an 8.582sec pass at an astonishing 269.58km/h – this officially makes it the world’s quickest production car. For perspective, the McLaren P1 covers the sprint in 9.8sec at 239.63km/h, with the Chiron Sport knocking it back to 9.4sec at 254km/h. Tesla’s new Model S Plaid briefly took the production car crown with a 9.247sec time at 244.76, but topping this was light work for the Nevera.

Piloted by Brooks Weiselblat of DragTimes, the car was fitted with standard Michelin Pilot Sport 4S tyres and had never previously seen a ‘prepped’ drag racing surface. Rimac test and development driver Miroslav Zrnčević, said: ‘This was our first test on a VHT (glued) surface, so we did not know what to expect. At first we were hitting less than expected ¼ mile times (8,7 and 8,8 seconds) than we did on a normal, non-prepped surface in Europe.’  He went on to say: ‘After some adjustments and different tire warm-up strategies we managed to get better results. Brooks helped with his experience of staging the car and we managed to set the world record for the fastest accelerating production car and also beat our own 1/4 mile record.’ The Nevera itself is based on the Concept_Two first unveiled in 2018, but now Rimac has taken that car’s bespoke chassis, motors and batteries and turned them into something tangible that customers can actually purchase. The numbers are predictably immense, including the price, which is AUD$3.26 million, plus taxes.

Peak power is rated at a cool 1407kW and torque at 2360Nm, generated from four individual ‘Permanent Magnet’ motors in modules that sit on each axle. The two axles are driven from individual single-speed transmissions, but power is still fully variable left-to-right. The motors draw power from a 120kWh (gross) lithium-ion battery pack that sits in a T-shaped module between and behind the two seats. Range is predicted to be around the 550-kilometre mark, and no indication of weight has been revealed.

Rimac’s performance figures are near incomprehensible though, the Nevera reaching 100km/h in 1.85sec, 160km/h in 4.3sec, 186mph in 9.3sec and crossing the quarter-mile in sub-8.6sec. Top speed is rated at 300km/h – we look forward to seeing the official video and inevitable backlash when time comes to substantiate this figure.

The Nevera’s construction is derived from a central carbonfibre monocoque tub, with aluminium subframes bolted at each end to which the axles are mounted. The battery pack also forms a structural part of the carbon tub itself, adding 37 per cent extra stiffness to the torsional rigidity rating. Suspension is of a double wishbone design at all four corners, with adaptive dampers and an adjustable ride height giving the Nevera increased adjustability within the driver mode systems. 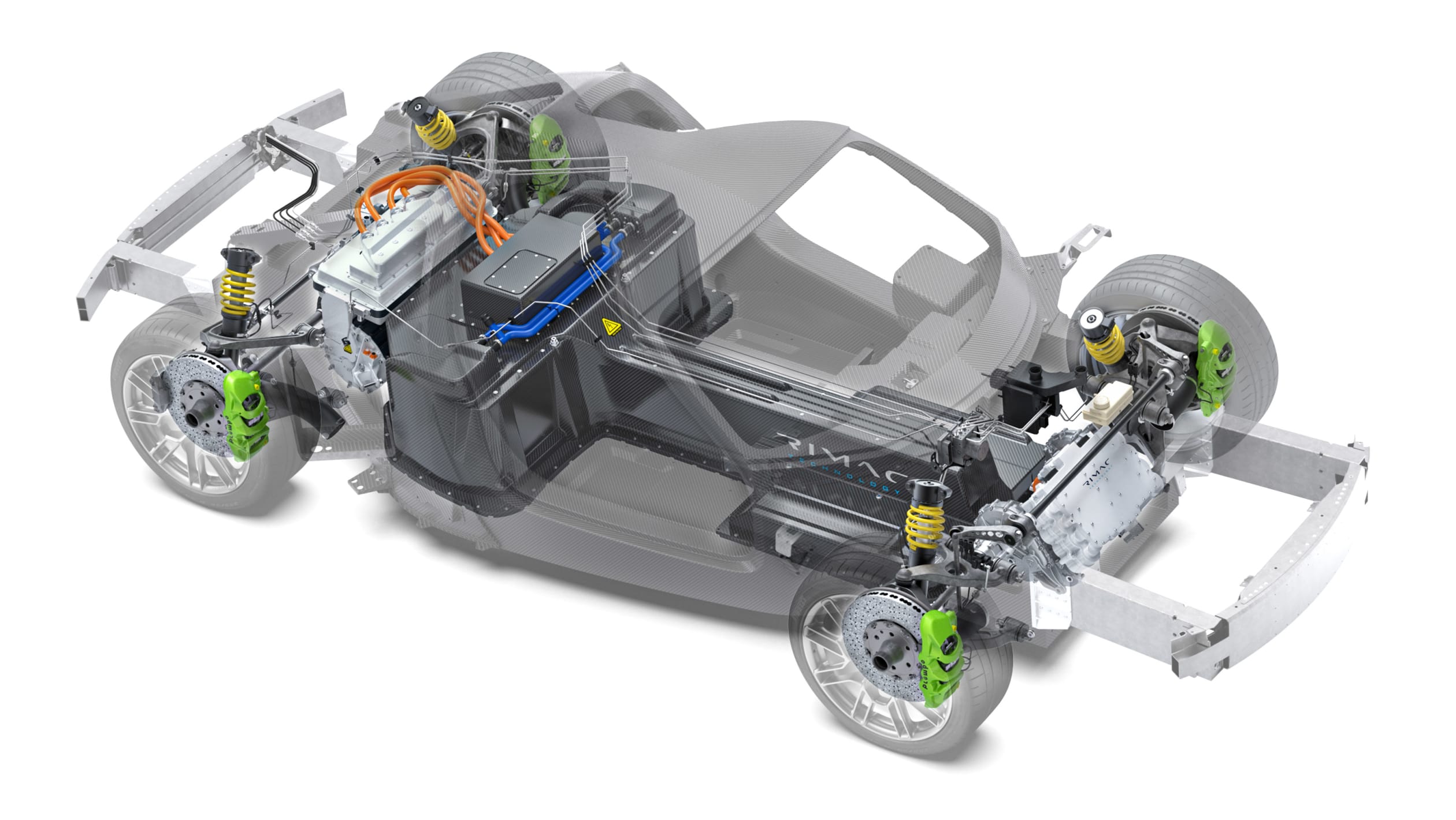 Like most EVs, braking is dealt with by two systems, with Rimac’s 300kW regeneration capability being the most powerful of any production EV, backed up by a 390mm set of carbon-ceramics discs and six-piston calipers from Brembo. The braking system is entirely by-wire, with a feedback motor built in to the hardware designed to merge brake feel from the two systems into one linear response. The steering is also completely by-wire, but it remains to be seen if Rimac does a better job of it than Infiniti did with the odd-feeling Q60 Coupe.

The Nevera’s type of total torque vectoring has also given engineers the chance to rethink traditional traction control and stability programs, essentially replacing those systems (which cut power and utilise friction brakes) with a predictive and reactive traction management system using the electric motors entirely independently of one another. The new system is called ‘Rimac All Wheel Torque Vectoring 2’ (R-AWTV 2) and specifically calibrates the amount of torque being sent to each wheel according to conditions, driver inputs and the selected driver mode, to get the most from each of the four motors and keep the car stable whilst doing so. While the exterior design does look similar to that of the concept, Rimac has completed a large amount of aero refinement to clean up the shape, while also improving downforce values that are augmented by its active aerodynamic components. These include a moveable grille insert, flaps under the splitter and in the rear diffuser, plus a moveable rear wing. All these operate independently depending on the selected driver mode. Total downforce variation between its highest and lowest settings is a substantial 326 per cent.

Inside, the cabin is typically heavy on digital interfaces, with three displays incorporated into an otherwise restrained yet infinitely customisable interior. In fact, Rimac is adamant that no two Neveras will leave the factory the same, offering three starting specifications as well as a completely bespoke palette of colours. While all of the car’s on-paper numbers sound exciting, the real thrill with the Rimac Nevera is that it is a far more tangible electric hypercar than just about any other in development right now. That enthusiasm has spread to the traditional OEMs too, with confidence in Rimac’s technology so strong that Porsche recently purchased a ten per cent share in the company, while Hyundai Kia has also invested AUD$132 million. This is evidence that more than simply being a manufacturer of electric supercars, Rimac looks set to become a very important part of the performance car landscape and the industry’s transition to electrification.

As a final note, the name ‘Nevera’ comes from a word for a storm surge that can hit the Croatian coast from the Adriatic Sea – with Italy just on the other side. While Rimac still has a way to go before it becomes a household name alongside more traditional supercar royalty, there’s certainly some level of irony considering the storm this modern supercar maker is about to stir up.