The ultra-lightweight wheels coming to a car near you If a car on 20-inch rims is travelling at 480km/h, the wheels will be spinning at roughly 3800rpm depending on the profile of the tyre. At that speed the centrifugal forces acting on the rim and in the tyre are huge, and the heavier the wheel and tyre assembly, the bigger they get.

Think of those playground roundabouts. Hanging off the outside of one is fine when it’s rotating lazily, but when the big kids turn up and spin it like a top, it’s hard to hold on.

Wheels for ultra-fast cars, like the SSC Tuatara, which set a new world record for a production car of 455km/h, need to be as light as possible. Specifically, the rims need to be light and strong. Back in the day, the material of choice for racing wheels was magnesium alloy, much lighter than the aluminium alloy used for conventional road-going wheels. A lighter wheel has less inertia, making it easier to change direction as well as reducing unsprung weight.

UK firm Dymag, which supplied the Tuatara’s 20-inch wheels, was founded in 1975 and became known for magnesium wheels on rally (the Group B MG Metro 6R4 was an early example), F1, Paris-Dakar, Le Mans and Indy 500 cars, to name a few. Its latest BX-E and BX-F wheels are a hybrid of magnesium or alloy hubs and spokes, which are developed by the company’s American partner, Forgeline, and Dymag’s rim or ‘barrel’, to which the centre sections are bolted. An advantage of hybrid wheels, as opposed to all-carbonfibre (monoblock) wheels, is that the alloy centres conduct away the heat generated by heavy braking.

The rims are capable of withstanding a simulated kerb strike of 684kg as well as coping with the forces generated at warp speed. The complete wheel weighs just 9kg and is tremendously strong. The tyre well (the area around the centreline of the rim) is the most highly stressed area of any rim and where most stress fractures happen.

In a AUD$18 million development programme over four years, Dymag worked with the UK’s National Composite Centre to analyse exactly where the load was carried. The final design spreads the load and means the rims can take a strike that might shatter conventional alloys. The outer edges of the rim, supporting the tyre bead, are hollow with a foam filling the void, creating a sacrificial area to protect the tyre and adding stiffness to the rim.

The rim is made using the resin transfer moulding process, where the carbonfibre is compressed in a mould and resin injected under high pressure. The carbonfibre itself is a triaxial (multi-directional) fibre, which drapes nicely in the mould. Dymag worked with partners to develop ultraviolet-stable resin systems and a clear, high-quality finish.

Both the resin systems and the finishes can withstand the high temperatures generated by brakes on track. The laying up of the carbonfibre in the mould is done by hand, but the process lends itself to automation. The cost is in supercar territory today, but Dymag expects that would bring the cost down through economy of scale, eventually allowing fitment to sports cars in the $70k-$90k bracket. 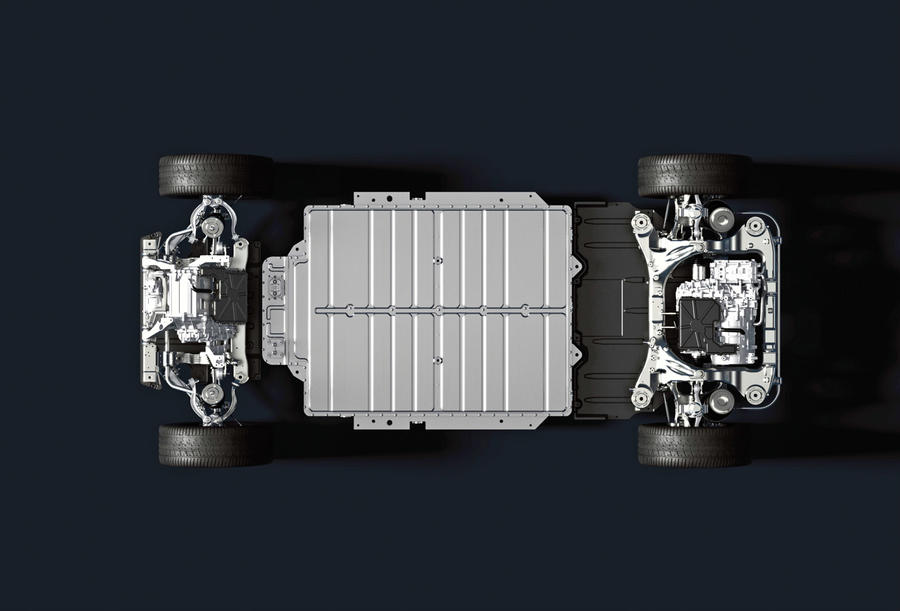 Chinese firm Nio’s ET7 flagship EV, due next year, gets its 480kW and 850Nm from two electric motors, one on the front axle and one at the rear. The front-mounted motor is a 180kW permanent magnet motor, but Nio has opted for a 300kW unit at the rear. The permanent magnet machine was chosen for maximum efficiency and the induction technology for its superior power density, packing more power into the same space and implying a rear-wheel-drive bias.