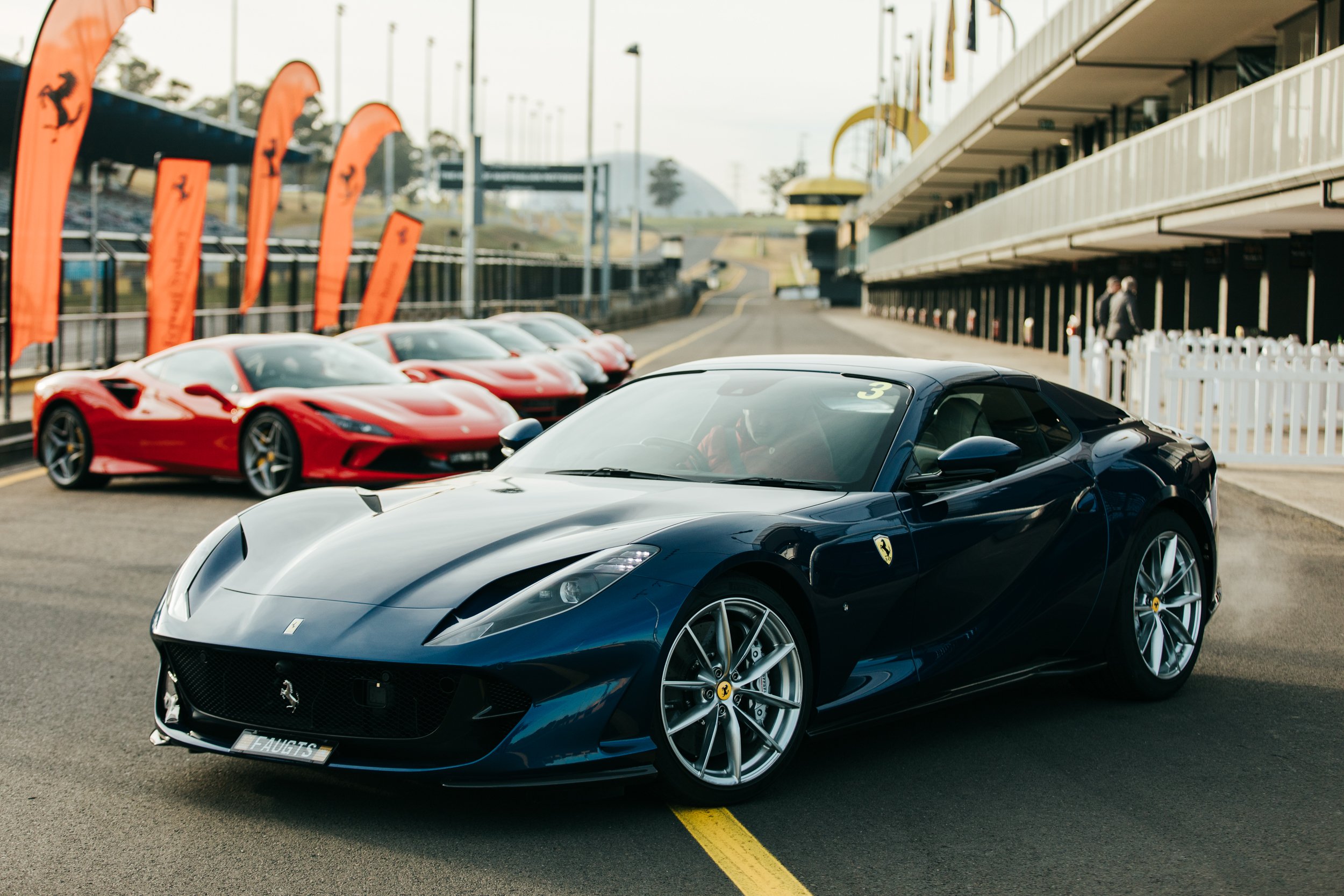 Never in more than two decades of testing at Sydney Motorsport Park (nee Eastern Creek Raceway) have I seen numbers so big on the rush towards turn one. Hard on the throttle out of turn 11 and the Ferrari 812 GTS devours huge chunks of the main straight every second. Third gear runs to around 160km/h and it’s gone well before the pit entrance comes into range. The 6.5-litre V12 has demolished fourth gear by 200km/h and still the engine screams its fury through fifth. The quick march of the LED lights across the top of the steering wheel demands another shift at 250km/h, but even in sixth the Ferrari’s acceleration is savage. Turn one’s ultra-rapid approach calls an end to the engine’s outrage at an indicated 277km/h (63km/h short of the 340km/h top speed), and a firm lunge onto the brake pedal and a downshift into fifth sees the front-engined masterpiece slice through one of the fastest corners in Australian motorsport at nearly 200km/h. That 20-second snapshot perfectly encapsulates the upper end of the 812 GTS’ incredible bandwidth, and as this was a track-only test, the other end of the bandwidth remained unexplored. However, extensive previous experience of the 812 Superfast suggests that the GTS will be every bit as accomplished in more mundane environments. Perhaps more so given that, for the first time since the 575 Superamerica of 2002-06, a front-engined Ferrari V12 is available with an open top. One suspects that the GTS has the potential to be even more special than its coupe brother during everyday tasks. The retractable hardtop flips back in 14 seconds and reveals a targa-style opening, with gorgeous flying buttresses extending to the rear deck. Roof open or closed, the GTS is a stunning car, especially so when finished in Blu Le Mans of our test example – I’m a complete sucker for a blue front-engined Ferrari. Familiar from the 812 Superfast, the V12 in the GTS is a masterpiece and truly one of the finest, smoothest and most savage engines ever to power a road car. Displacing 6496cc, the 65-degree V12 produces a ludicrous 588kW, making it the most powerful car on sale in Australia, at least until its 736kW SF90 stablemate arrives later this year. Those 588kW arrive at 8500rpm, just 400rpm before the rev limiter finally cries enough. Given the displacement of the V12, those RPM numbers are perhaps even more astonishing than the power figure. In a world full of turbocharged torque monsters, the GTS’ 718Nm at 7000rpm sounds rather peaky, but Ferrari points out that 80 percent (or 574Nm) is available from just 3500rpm. And the engine’s appetite for revs means that there’s almost no delay between throttle application and eye-widening acceleration. The engine explodes from 6000rpm with such ferocity that you need to be alert with your shifting to avoid the V12 stuttering into its 8900rpm ceiling.

Regardless of whether you’re heading up or down the gearbox, the seven-speed dual-clutch unit fires home shifts with smoothness and speed. Downshifts are accompanied by a strident bark that it still clearly audible through a helmet and balaclava.

Like all modern Ferraris, and common to the related Superfast, the steering in the GTS is razor sharp and alert. Coupled to Ferrari’s four-wheel-steering system, the steering asks for small and smooth movements of the wheel to guide the GTS with precision. Get it right and the big front-engined bruiser will dance through corners on the edge of adhesion. At $675,888, the 812 GTS sits $65K above the Superfast, but that price is really just the jumping off point. Tick a few boxes and your GTS will quickly nudge a million bucks by the time it is sitting in your garage. Of course, that’s an extraordinary amount of money, but the 812 delivers extraordinary performance and makes you feel pretty good while doing it.