The most significant news is the introduction of a new top-spec Turbo S variant and a second plug-in hybrid option. The Turbo S replaces the existing Turbo model on the outgoing car, uprating the 4.0-litre biturbo V8 from 404kW to 463kW. Torque is also increased by 64Nm to 820nM. The result is a quoted 0-100km/h time of 3.1sec – a substantial improvement on the 3.6sec quoted for the Turbo with the Sport Chrono Package. The top speed rises from 305km/h to 315km/h for the new flagship. It’s also claimed to have set a new Nürburgring lap record for executive cars at 7:29:81, beating the 2018 record set by the Mercedes-AMG GT 63 S 4 Door. The existing Panamera GTS has been upgraded to help reduce the gap between it and the new Turbo S. That car’s 4.0-litre V8 is boosted by 14kW to 352kW and 620Nm. Porsche claims the power output “continuously increases up close to the engine speed limit” to give the feeling of an old-school naturally-aspirated model. A standard-fit sports exhaust aims to introduce a more traditional V8 soundtrack. Also new is a more affordable plug-in model in the form of the Panamera 4S E-Hybrid. Replacing the old 340kW 4 E-Hybrid, the 4S puts out a combined system output of 411kW and 750Nm from a 323kW 2.9-litre biturbo V6 mated to a 100kW electric motor integrated into the eight-speed transmission. Porsche claims a 0-100km/h time of 3.7sec (with the Sport Chrono Package) and a 297km/h top speed. Perhaps of more relevance is the increased battery size, up from 14.1kWh of previous Panamera hybrids to 17.9kWh thanks to optimised cells. This, along with revisions to the driving modes to improve efficiency, results in an electric range of up to 55 kilometres – a 30% improvement on the 4 E-Hybrid. Styling revisions are subtle for the three body style variants – the standard saloon, the Sport Turismo estate and the long-wheelbase executive model. They include the standard fitment of the previously optional Sport Design front end, which features larger air intakes, a different grille and single-bar front light model. The Panamera Turbo S features a model-specific front end with enlarged side intakes and new design elements, while all variants get new headlight designs. At the rear the full-width light strip has been revised to run seamlessly over the bootlid, with redesigned LED tail-lights featuring a dynamic coming/leaving home function. Furthermore, three new 20 and 21-inch wheel designs bring the rim choice total to 10. 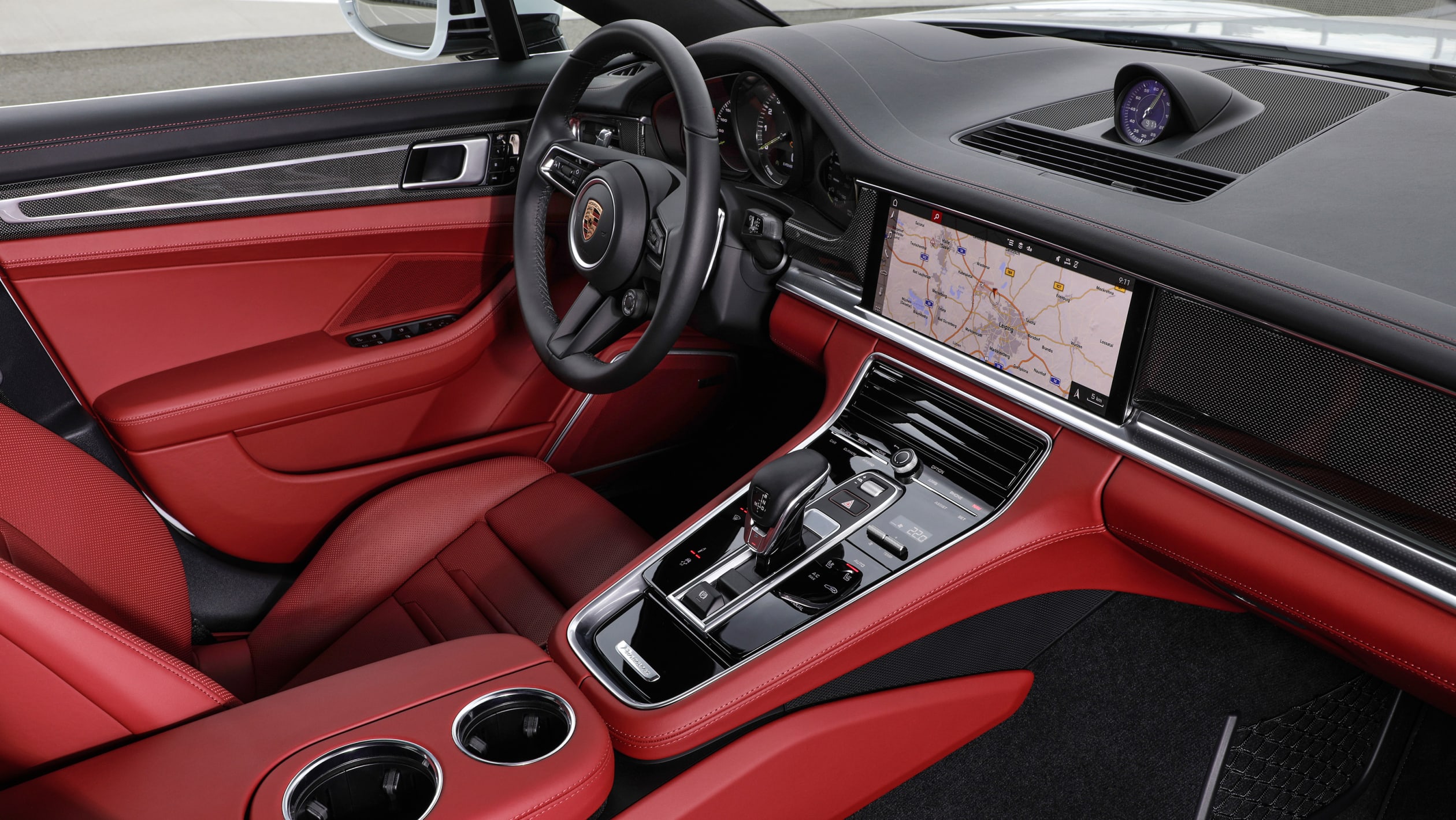 The interior architecture remains fundamentally the same, but new functions have been added to the car’s infotainment system. These include improved voice control, live road sign and hazard info and wireless Apple CarPlay. The list of driver assist functions is extended with Lane Keeping Assist and road sign recognition now standard.