Why BISG is the heart of mild hybrids BISG sounds like something you might nibble on with a flat white, but it’s actually yet another example of tech jargon. It stands for belt-integrated starter-generator, which is a device at the heart of mild-hybrid systems, which in turn are synonymous with modern 48V electrical systems.

Ford recently announced that the new Puma’s 48V mild-hybrid system – in which a BISG provides extra torque for a 1.0-litre three-cylinder turbo petrol engine – is now available in the Fiesta as well. In what Ford calls ‘torque substitution mode’, the BISG produces up to 25Nm, reducing the amount of work the engine has to do. In ‘torque supplementation’ mode, it can boost the engine’s peak torque by 20Nm. Other tricks include being able to reduce the engine’s compression ratio and fit a larger turbocharger, using torque from the BISG to neutralise the turbo lag that brings with it.

The BISG is the opposite of those early, fiddly, pre-48V attempts at mild-hybrid systems, because it’s virtually a bolt-on piece of kit and about as mechanically simple as it’s possible to get. It fits in place of the engine’s 12V alternator and that’s in fact pretty much what it is: a more powerful and slightly bulkier alternator-motor rated at 48V instead of 12V, enabling it to output anything up to around 15kW .

As it says on the proverbial tin, the BISG is integrated into the drivetrain with a belt-drive, similar to an alternator, enabling it to transmit torque to the engine’s crankshaft when it’s operating as a hybrid drive motor. When the driver lifts off the throttle, the crankshaft transmits torque back to the BISG as it switches to generator mode, converting kinetic energy from the moving car back into electricity, working exactly like a conventional alternator.

The BISG also starts the engine during those start-stop moments, but it’s usually the case (as it is with the Ford engine) that starting from cold is by a conventional 12V starter-motor to avoid belt slip.

The drive belt has to be more robust than a conventional alternator drive to transmit the torque of the motor to the engine. It wraps around additional idler pulleys (in a similar way to a camshaft drive) to prevent the belt from slipping. As 48V technology has trickled down from more expensive vehicles to smaller and cheaper ones, the work done by the belt drive has become easier, because of lower resistance from smaller engines, especially when restarting.

Although the 48V BISG simply replaces the 12V alternator, fitting one does require a few other bits and pieces.

An inverter to convert the electrical current between AC for the BISG and DC for the battery is integrated into the BISG housing, and a 48V battery pack is needed in addition to the normal 12V battery, which powers the car’s lights, instruments, starter and other conventional electrics.

In addition, a DC/DC converter (transformer) must sit between the two to step down the voltage for the 12V battery. 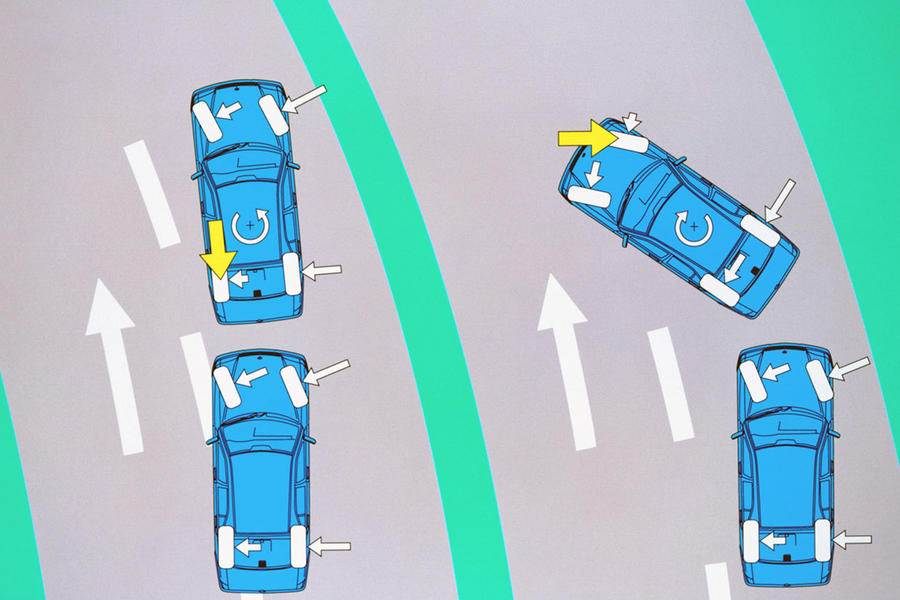 The ESP (electronic stability programme) is 25 years old in 2020. It was the product of development work by Daimler-Benz and components supplier Bosch back in the 1980s. It works by applying individual brakes to induce a steering effect and by modulating the engine’s torque output to stabilise an out-of-control car.