Volkswagen has revealed the new Arteon Shooting Brake alongside the facelifted version of the executive fastback – with both models gaining new plug-in hybrid and range-topping 236kW R variants.

The Arteon was launched in 2017 but has so far been offered in only a fastback bodystyle. The new Arteon Shooting Brake variant features a separate design from the B-pillars back, with an extended roofline, a tapered glasshouse, prominent haunches over the rear wheels and an angled tailgate. Official figures show the Shooting Brake offers 565 litres of boot space (versus 563 litres in the fastback) and 1632 litres with the seats folded (1557 litres), but Volkswagen says that, because the space above the beltline isn’t included in these measurements, the Shooting Brake’s loadspace is actually significantly larger. Both models will be launched early next year, with the R versions arriving as part of the continued range expansion of Volkswagen’s R performance division. They will use the fourth evolution of the company’s venerable EA288 2.0-litre four-cylinder turbo petrol engine, producing 236kW and 420Nm, a seven-speed dual-clutch automatic gearbox and an updated version of the 4Motion four-wheel-drive system.

A new R Performance Torque Vectoring System is said to have been inspired by similar systems on racing cars. It can bias up to 100% of the motor’s power output ‘within miliseconds’ to either axle or any of the four wheels, making the Arteon “perceptively more agile”, according to Volkswagen. Torque distribution is determined by a combination of steering angle, accelerator input, lateral acceleration, yaw rate and speed.

The new Arteon eHybrid, available in both bodystyles, uses the plug-in hybrid powertrain from the Passat GTE: a 115kW 1.4-litre four-cylinder turbo petrol engine a 84kW electric motor. The two units have a combined output of 160kW, which is sent to the front wheels through a six-speed dual-clutch automatic gearbox. It offers an electric-only range of 53 kilometres and can operate in zero-emissions mode at speeds of up to 140km/h. 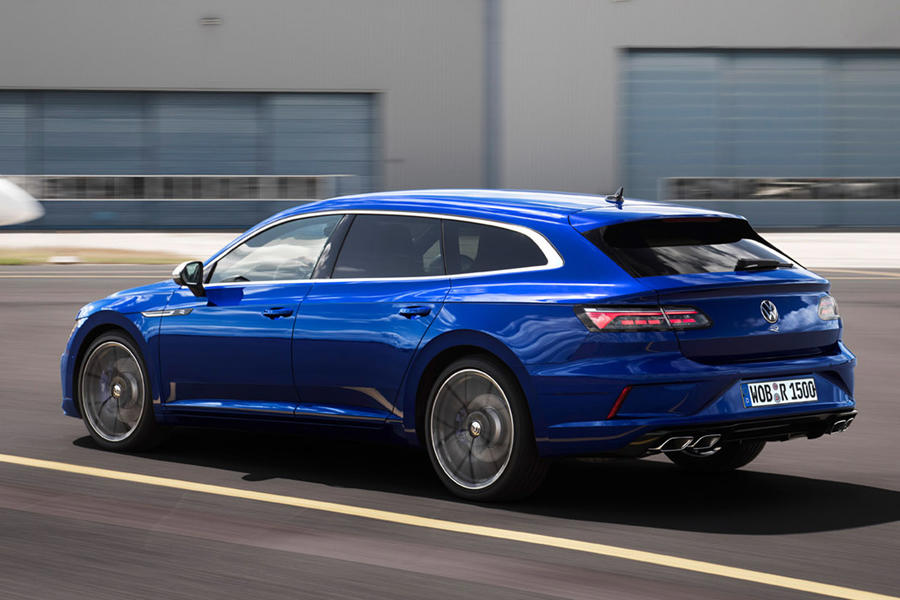 There are also three turbo petrol and two diesel engines in the Arteon line-up. The petrols range from 139kW to 206kW, while the 110kW and 147kW diesels are fitted with an updated selective catalytic reduction (SCR) filter and a new AdBlue system that, Volkswagen claims, reduces NOx emissions by around 80%. Buyers can choose between a six-speed manual or a seven-speed dual-clutch automatic gearbox, with four-wheel drive offered across the range. Unlike the new Golf, the Arteon isn’t available with mild-hybrid powertrains, because it still sits atop the original-specification MQB platform, meaning we’re unlikely to see MHEV variants introduced until the second-generation model arrives.

The restyled Arteon receives a raft of design changes, including a new grille with a light band, revised LED headlights and a range of new alloy wheel designs ranging in diameter from 18in to 20in. There are four different styles: basic, Elegance, R-Line and R. The performance models feature typical R styling cues, including a beefed-up front bumper with large cooling ducts, blue-painted brake calipers, chrome exhaust pipes and 20-inch ‘performance’ alloys. Martin Hube, spokesman for the Arteon model line, said: “We listened to feedback from our Arteon customers to further improve the Arteon family, not only adding a new derivative but also giving it a completely new and very sophisticated interior, which is very premium in terms of material. It has, basically, a Touareg interior.” The updated Arteon range will go on sale in the autumn, although some variants may take longer to come to market than others. Prices have yet to be revealed but the facelifted car is expected to command a slight premium over the current model.