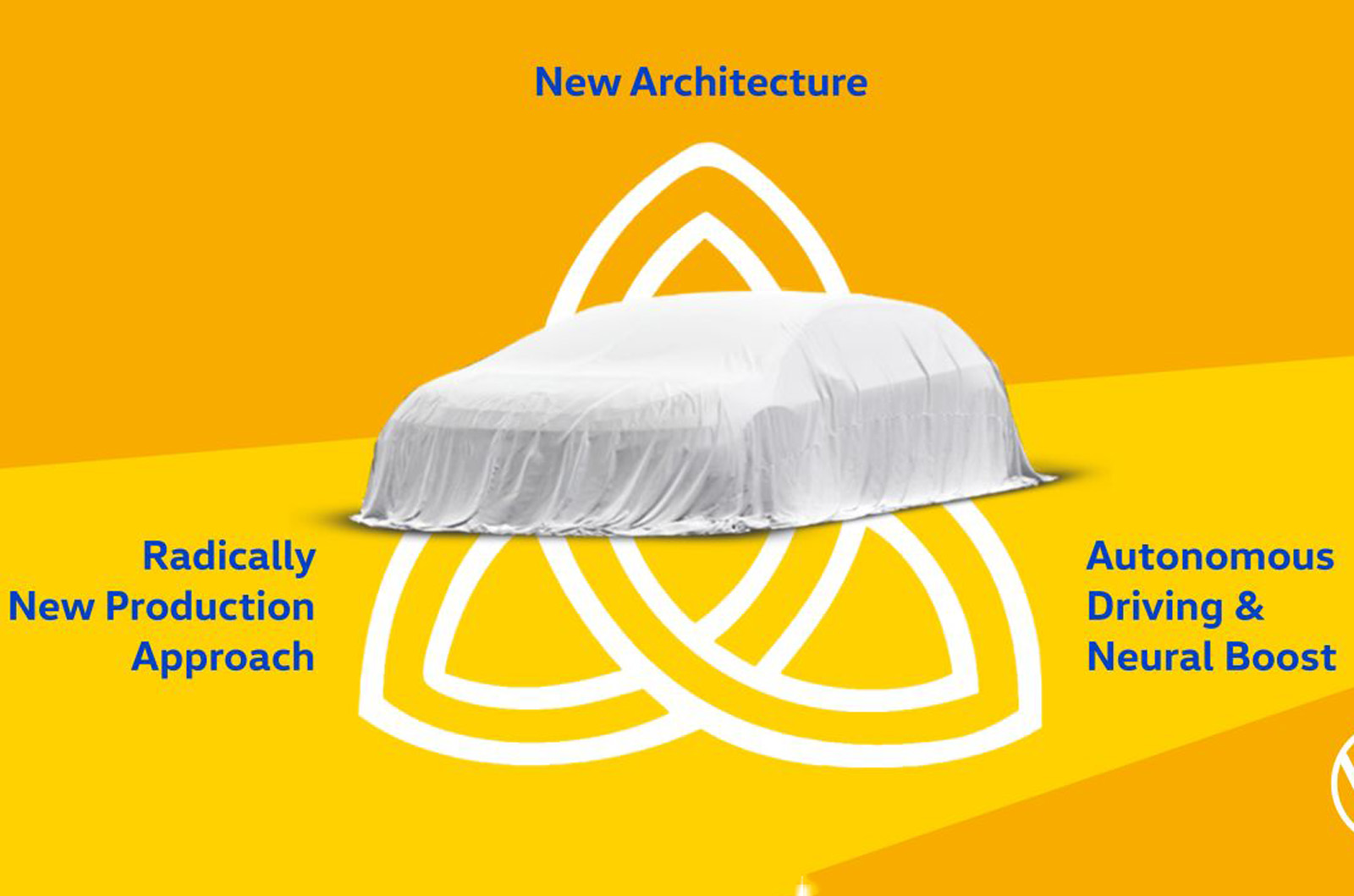 Volkswagen is working on a new high-tech electric flagship model that will be built on an advanced bespoke platform currently under development.

Referred to as Project Trinity, the EV is described as “a highly efficient flat-seat concept with an iconic design”. Shown under a cover in a preview image, it looks to take design inspiration from the Volkswagen ID 3 around the front end, with its wheels pushed out to the corners and a distinctive rising windowline.

Details of the new platform are thin on the ground, but its ‘flat panel’ construction should allow for enhanced flexibility and optimal cabin space.

Volkswagen will use the new platform to pioneer a “radically new production approach” that will seek to demonstrate new ways of building EVs economically and efficiently in various locations.

The brand has already confirmed that its Wolfsburg base in Germany will become “the pioneering factory for the highly automated manufacture of electric vehicles” and that the first to be built there will be the next electric flagship, now known as Project Trinity.

Project Trinity will offer ‘Level 2+’ autonomous functions, likely including driver monitoring and adaptive cruise control, and be made “Level 4-ready,” hinting at its potential for full self-driving capabilities and position as the brand’s new technical flagship.

Project Trinity will likely borrow elements of the existing MEB EV architecture, but with substantial software and powertrain upgrades in line with Volkswagen’s ambition to “shape the new group backbone”.

It’s unclear whether non-MEB-based EVs will remain part of the ID family, but the production version of the Trinity likely won’t arrive until the ID 3 and ID 4 have been on the market for several years.

A key element of differentiation between today’s ID 3 and the next Volkswagen electric flagship will be the software used in its make-up. The brand’s newly formed Car.Software division will employ more than 10,000 staff worldwide by 2025 and will attempt to boost the proportion of in-house technology used in Volkswagen Group cars from 10% to 60%.

Currently in development is a new bespoke operating system called VW.OS, which is described as the software equivalent of a vehicle platform and can be expected to make its debut when Project Trinity is unwrapped.

The division’s former boss, Christian Senger, previously told Automotive Daily’s exclusive partner Autocar that it will function differently for vehicles at different price points, support wireless updates and function much like a smartphone.

The Project Trinity programme is similar to sibling brand Audi’s Artemis project, which will result in the premium marque launching a luxury electric saloon by 2024.

Devised as a rival to the upcoming Mercedes-Benz EQS, this will, like Project Trinity, pioneer technology not yet seen on Audi models, including 5G connectivity functions and augmented reality.

Project Artemis will serve as a technical showcase for up to 75 future Volkswagen Group models, including Project Trinity.

VW Project Trinity electric car to charge “as fast as...