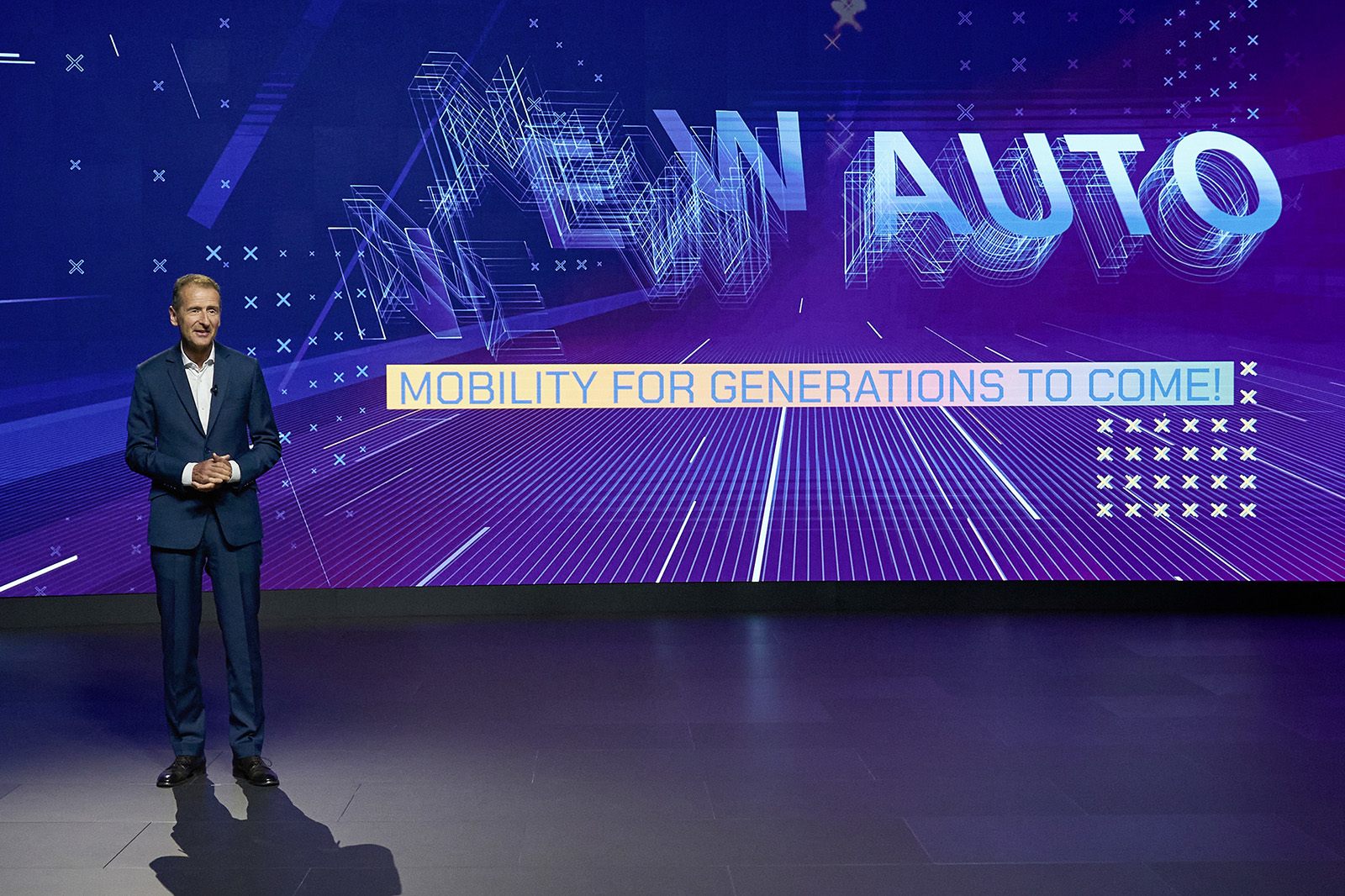 The Volkswagen Group has unveiled a bold ‘New Auto’ business strategy that it says will help to grow revenues through an increased focus on electric cars and software-driven services.

Launched by VW Group boss Herbert Diess, the New Auto strategy, will run until 2030 and involve the transformation of the car giant into a “software-driven mobility company”.

The strategy is designed to enable the VW Group – whose brands include Audi, Bentley, Porsche, Seat, Skoda and VW – to capitalise on predicted growth in automotive industry revenue through connected services. It is based on the VW Group’s plans to build on its scale through the increasing use of shared vehicle platforms and software.

Diess said the plan was called New Auto “because cars are here to stay”. He added: “Individual mobility will remain the most important means of transport in 2030. People driving or being driven in owned, leased, shared or rented cars will still account for 85% of mobility. And those 85% will be at the core of our business.”

While the New Auto plan involves created shared platforms and technology, Diess said that “brands will remain a key differentiator” in the future – and it will organise its marques into more distinct divisions.

Audi has been given greater responsibility for Bentley, Lamborghini and Ducati in the firm’s ‘premium brand portfolio’. Volkswagen will lead the ‘volume’ portfolio that includes Cupra, Seat and Skoda.

Volkswagen Commercial Vehicles will increase its focus on ‘lifestyle’ brands through the California vehicles and the forthcoming ID Buzz. The partnership with Ford will also help make the division more competitive in light commercial vehicles and pick-ups. Diess said the CV division was undergoing “the most radical transformation” of all the group brands.

Porsche will continue as the group’s sports and performance arm, with Diess noting that it “performs in a league of its own”. He said it will retain a “higher degree of independence”, while still becoming more closely integrated in terms of technology.

The VW Group is expecting battery-electric vehicles to account for 50% of its global sales by 2040, when it says nearly all of its new vehicles in major markets will be zero-emission. The firm is also committed to becoming fully climate-neutral in its operations by 2050.

With the shift to electrification, the VW Group expects the market for internal-combustion-engined vehicles to decline by more than 20% in the next 10 years, with BEVs becoming the largest source of revenue.

“By 2030, the global electric vehicle market will be on par with ICE sales,” said Diess. “We will be more profitable with EVs because batteries and charging will increase the share in value add and with our platforms we will be more competitive.”

The VW Group will continue to use its ICE business to generate strong cash flow to invest in new technology, but it is expecting that EVs will reach margin parity within three years due to tightening CO2 emissions and the new Euro 7 regulations.

The group also expects a dramatic rise in revenue from software-enabled sales, which it says could account for £1 billion per year by 2030. The VW Group has put a heavy focus on developing its own in-house operating system to enable it to capitalise on these new revenue streams with future vehicles.

Two key projects – Audi’s Project Artemis and Volkswagen’s Project Trinity – are in progress to develop new autonomous-ready vehicles that will run on an advanced new operating system. With Trinity, the car will be sold in largely standardised form, with customers then having to buy features they want online.

The VW Group is currently developing a new Scalable Systems Platform (SSP) that will be introduced from 2026 onwards. It is effectively a fusion of the mainstream MEB and performance-based PPE EV platforms, and is described by the firm as finally offering “one unified architecture for the whole product portfolio”.

Designed to be highly scalable to allow for everything from mass-market city cars to luxury grand tourers, SSP will be a fully digital platform, with as much emphasis on the development of the software systems that underpin it as the hardware.

The VW Group expects to produce more than 40 million vehicles on SSP during its lifetime – and has confirmed it will be offered to other manufacturers.

Around £685 million will be invested into upgrading the group’s research and development facilities in Wolfsburg in order to develop SSP.

It is also working on a new unified software stack, which will be introduced in 2025 and means that all of the group’s vehicles will effectively run on the same software. That will be tied to the development of the SSP platform, and will be key to allowing for the connected services it is aiming to profit from.

Having all of the group’s future cars on a uniform software system will also enable it to gain vast amounts of data from connected cars. The VW Group says this will enable a “big loop process”, where it can tailor services to customers’ needs, thereby expanding the life cycle of its products.

The VW Group is centralising its battery cell and charging development in-house through a new Technology division. It is committed to establishing a full battery supply chain that will cover all aspects from sourcing raw material through to battery production and then recycling.

As previously announced, the VW Group will introduce a unified battery cell format by 2030, which it says will reduce costs by half. By that date it will develop six battery factories across Europe, with a total production capacity of 240GWh.

The first of those will be in Sweden, and operated by Northvolt. The VW Group has now confirmed the second plant will be in Salzgitter, Germany, and will open in 2025 in partnership with Chinese firm Gotion High-Tech.

The VW Group said that it wants to make Spain a “strategic pillar” of its EV switch by basing the entire production of its entry-level ‘MEB Lite’ family in the country. That would involve a 40GWh battery factory – but a final decision on that is awaiting a response from the Spanish government on possible incentives.

The VW Group is anticipating that it will have systems enabling the operation of autonomous shuttle fleets, which it says will form a key part of the New Auto strategy. It is currently testing autonomous buses in Germany with Argo AI, and says it is on course to launch its first autonomous mobility service in Europe in 2025.

The unification of the VW Group’s software means the firm intends to integrate all of its mobility services, including autonomous shuttles, renting, subscriptions, sharing and ride-hailing.