VW design boss on the styling of the new Golf GTI Klaus Bischoff talks us round the new-look Golf GTI ahead of its final sign-off.

Volkswagen’s head of design, Klaus Bischoff, is confident the new, eigth-generation Golf GTI will strike a chord with long-time fans of the German hot hatch as well as a newer and younger group of more digitally oriented customers.

“We’ve paid tribute to all the classic design cues but managed to deliver the most dynamically styled Golf GTI yet. It’s full of tradition but we’ve also provided it with new appeal through a range of new digital features,” he says.

Bischoff, 59, has been responsible for Volkswagen brand design since 2007 and from the start of 2020 also assumed responsibility for overall design operations within the whole of the Volkswagen Group, but he considers designing the Golf GTI as one of his toughest tasks.

“The responsibility in designing the GTI is enormous,” he says. “There’s such great history to protect. But at the same time, it has to progress to fit the times. The challenge is getting the balance right.” The new model builds on the design developments brought to the standard eigth-generation Golf with what Bischoff calls a more wedge-inspired shape with stretched proportions.

Key elements include signature red highlights within the headlamps and across the top of the thin grille. The front bumper, shared with the upcoming Golf R , adopts a black honeycomb lower section with five individual foglights prominent at each side of it. 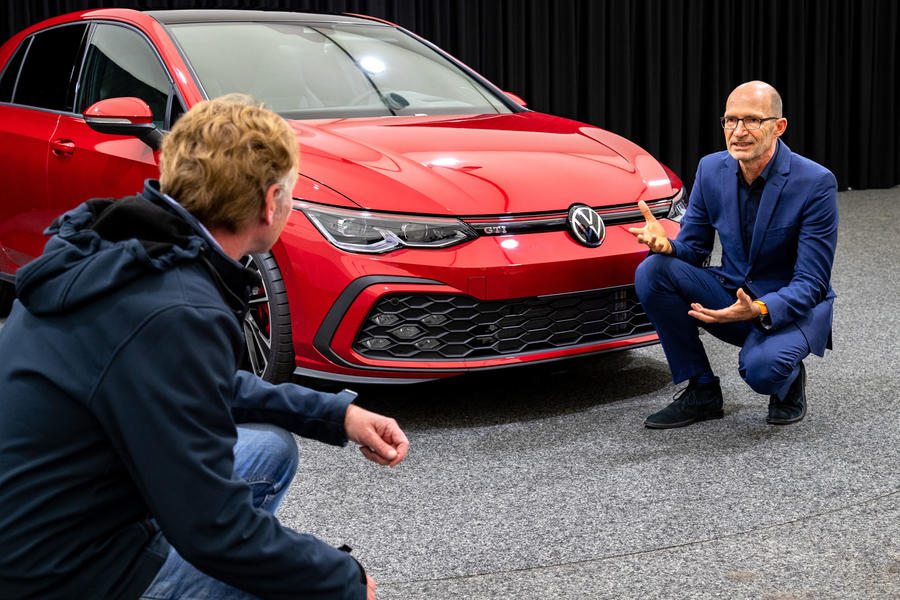 Further back, the 2020 model adopts a subtle badge plate, or “flitzer” as Bischoff calls it, within the front wings, as well as a black sill element below the doors.

The rear is distinguished by unique tail-light graphics and a prominent GTI badge. It retains the same bumper as standard Golf models but receives a unique lower section in black. The traditional round tailpipes have also been moved further outboard compared with the Mk7 model. Inside, the latest Golf GTI adopts the same interior as other new Golf models, albeit with the usual unique touches and red highlights. There’s a digital instrument display featuring GTI graphics and a standard 10.25in digital infotainment display with its own GTI-themed functions.

The traditional tartan seats remain, but they receive a new pattern that Bischoff describes as being more digital in appeal than that used by the old Golf GTI. They’re terrifically supportive and, in another new development, now come with integrated headrests.