New Sensify braking system from Brembo aims to revolutionise how quickly and safely vehicles can stop in any conditions.

Brembo has revealed what it is heralding as a revolution in braking, a new system that it calls Sensify. It combines artificial intelligence and an electronically controlled braking system that can not only improve braking performance, but is also designed to work across a spectrum of different vehicle types — everything from city cars to vans and even hypercars. Brembo also foresees this system being applied to motorcycles, and potentially trailers and caravans, too. It should also be noted that it can be paired with any powertrain, be it petrol, diesel, hybrid or electric.

The Sensify system is primarily operated electrically, although Brembo stops short of calling it a brake-by-wire system. There is still a brake pedal, but rather than activating a brake booster, as is the norm, this sends a signal to the system’s control computer. This then draws information from an array of sensors to determine the optimal braking effort required at each wheel. Data such as individual wheel speed, steering angle and surface grip are continually monitored and the figures contribute to how the braking force is distributed – with full variability. Vehicle weight is a significant factor that has to be taken into account and, although this is unlikely to change significantly in a car, in the case of commercial vehicles, the system can adapt over the course of the day as deliveries are made and the overall weight decreases; the driver doesn’t experience any difference in brake pedal feel or performance.

The Sensify system uses two control units to maximise safety by having a failsafe redundancy set-up, similar to the technology already used in aviation. It means that, should one element within the system fail, the vehicle can continue to operate safely.

Brembo did this to improve confidence in a system that does away with the traditional anti-lock brake modulator and electronic stability control units. At the same time, it also reduces the amount of brake lines and brake fluid required. 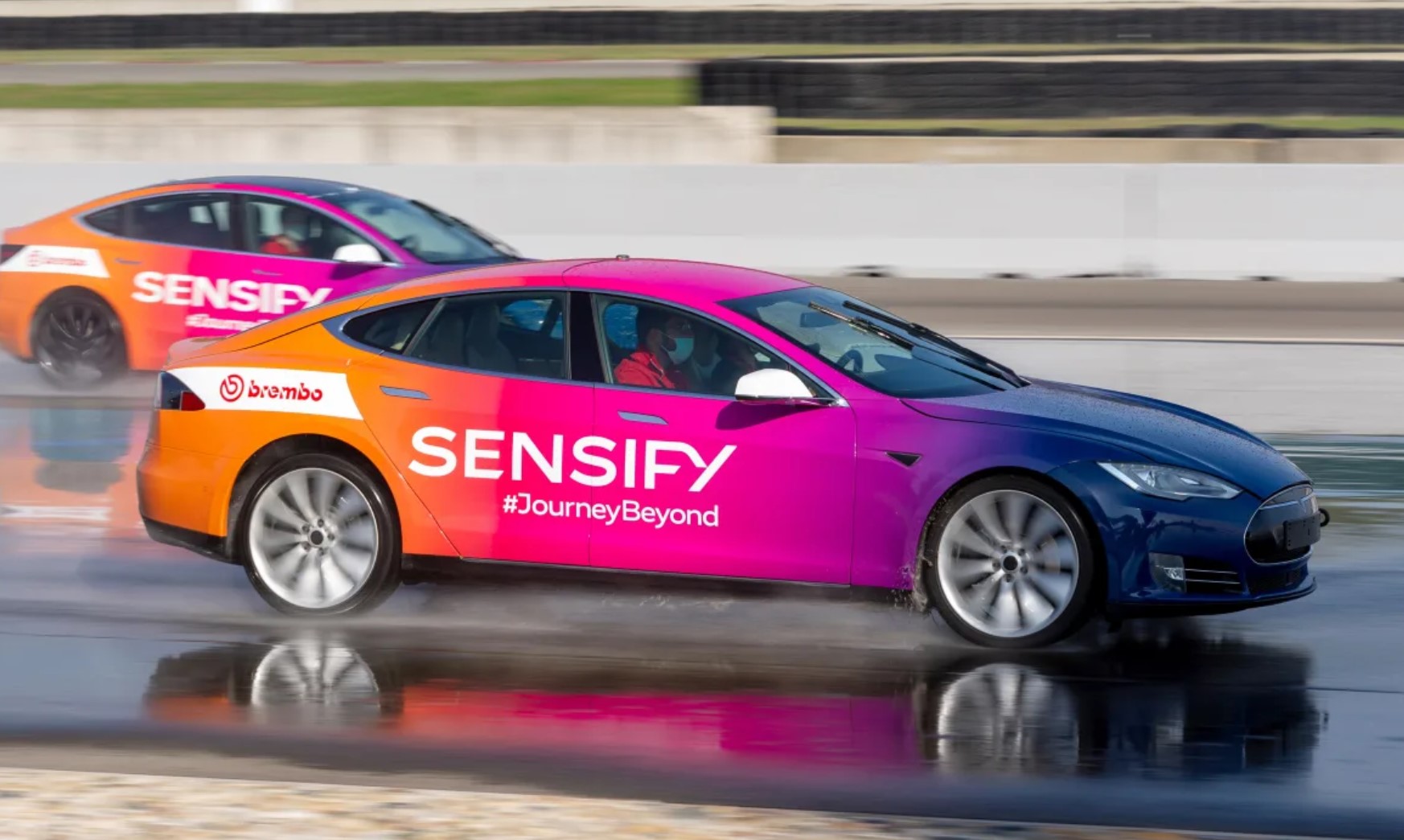 Brembo says that Sensify doesn’t require the brake pads to be in constant contact with the disc surface, although it’s possible for them to be programmed to do so to clear water in wet conditions. This means that pad life can be extended at the same time as reducing particle emissions, while the vehicle’s fuel economy is improved by reducing drag.

In the first iteration of the system, there is hydraulic fluid in the front calipers to apply force to the pistons, although the rear brakes in the cars we drove were running a “dry brake” set-up with no fluid. Instead, the caliper was operated by an electronically controlled actuator. The real test came when we took to the low-friction-surface areas, each designed to simulate varying conditions from wet concrete to snow. Trying the standard braking system first, we were able to set a benchmark and the Tesla (equipped with Pirelli winter tyres) performed as expected.

Switching to the Sensify-equipped car revealed a clear difference between the two set-ups. On wet concrete the Sensify car stopped in a noticeably shorter distance and with less movement through the steering wheel.

Then we tried the simulated snow — a surface that can make even the most experienced drivers wary — and the difference in braking performance was astonishing. Pulsing or kickback through the brake pedal was eliminated and the stopping distance was shortened dramatically.

Taking to the track to explore the dynamic advantages underscored how much of an effect braking can have on a car’s steering and handling. Heavy braking in the middle of a corner in the standard car instigated understeer that required reactive steering input from the driver. Repeating the same process with Brembo’s new tech resulted in the speed being scrubbed off more quickly, but with no effect on the steering or the car’s line through the corners. Performing high-speed emergency braking tests simulating typical motorway conditions further served to demonstrate the benefits of Sensify, reducing stopping distances to such an extent that the difference was obvious even without using any measuring equipment.

Brembo’s engineers reckon that at 130km/h the stopping distance can be shortened by as much as 10 metres. That alone could prevent an enormous number of pile-ups, which would not only save lives, but could also potentially reduce motorists’ insurance costs in the longer term.

The Sensify system is designed to be configurable, too, so two different drivers of the same car can have a different brake pedal “feel”. It could even have different set-ups linked to a car’s drive modes, which typically adjust the power steering and engine performance already. In theory it’s possible for this to be altered via a smartphone app, too.

Brembo’s CEO, Daniele Schillaci, confirmed to Automotive Daily that the Sensify system will enter series production with an unnamed car maker at the beginning of 2024, and that Brembo expects another to use the system later that year. The Brembo boss is confident that by the end of the decade this will become an industry-standard system.

No decision has been made yet as to whether the car makers will display the Sensify name just as the first models with ABS proudly wore a badge. Whatever it’s called, the first impressions are that Brembo may be onto something, and full brake-by-wire systems are closer to reality than ever.

Using data from a range of sources –including wheel speed, steering angle and surface grip, plus the car’s weight – the controller sends the optimum braking force to each wheel. For safety reasons, there are two control units.

Although the front brakes are operated hydraulically, the actuator that controls them responds to an electronic signal. However, the rear brakes are controlled completely electronically.

Unlike a regular braking system, where the brake pedal is connected to a booster, pressing the pedal in a Sensify car sends a signal to the Control Unit (left), which decides how to split the braking force.

The brakes are conventional units, but among the benefits of the new Sensify system are that it needs fewer brake lines, the pads last longer than in a regular set-up, and less drag means lower emissions.

How driving simulators are used to increase EV range